(Minghui.org) Falun Dafa practitioners in Turkey held a screening of the documentary “Free China” at the Mustafa Kemal University Department of Medicine in Antakya, on March 9, 2018,

Students from the Department of Medicine, the Department of Theology and the Economics Department attended the screening. Some of the university's administrators and faculty also had the opportunity to see the film, a documentary about the persecution of Falun Gong in China. 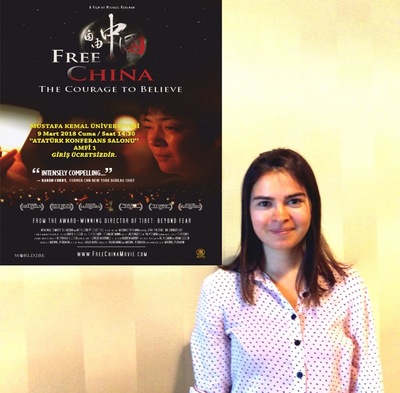 The screening was hosted by Gözde Gezek, a fifth-year medical student who practices Falun Dafa. Gözde said, "I have been practicing Falun Dafa since the summer of 2015. As a practitioner, I have benefited greatly from Falun Dafa and I felt as if the persecution in China was directed at me, too. I felt the horror of the human rights violations, and I felt responsible for doing something about it. " 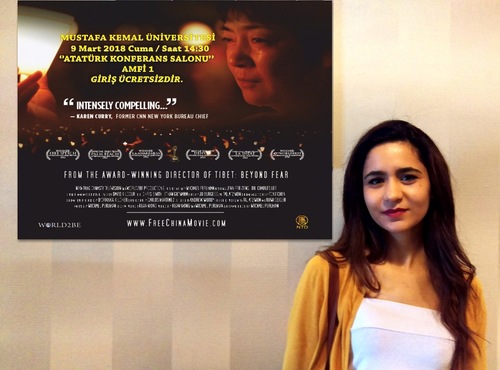 Songul Çelik, a third-year student in the Department of Economics.

Songul Çelik, a third-year student in the Department of Economics, remarked, "It was a really beautiful film. I had to turn away from the images of people who were tortured because I am a sensitive person, but it left a deep impression on me. It is unimaginable for a country to carry out such a persecution against its own citizens.”

After the film screening, a practitioner spoke about a signature drive calling for an end to the persecution. Students were eager to add their signatures to the petition in support of Falun Dafa. 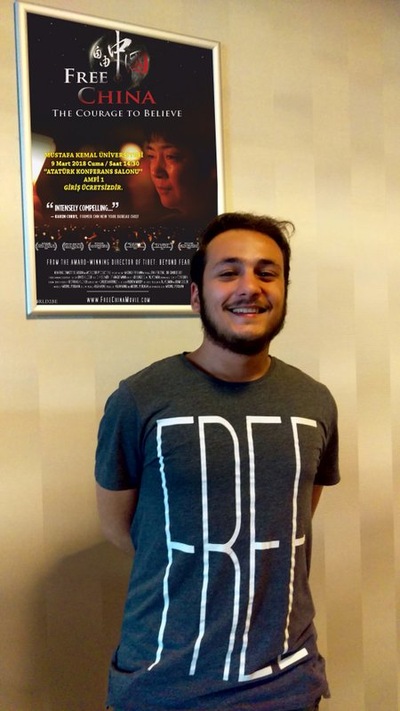 Mustafa Nosöz, a third-year student in the Department of Economics, said it was a coincidence that he was wearing a t-shirt emblazoned with the word “Free”!

Mustafa Nosöz, a third-year student in the Department of Economics, had by coincidence worn a t-shirt printed with the word “Free” that day. After watching the documentary, he said, ''In China to do this mercilessly to their citizens is very painful and a terrible thing. We know that the Chinese regime tortures people; I am very disturbed and fully support the signature campaign. I hope it will help stop the persecution.”

“Australia: “Our Efforts Together Will Expose the Truth.””