(Minghui.org) Falun Dafa practitioners participated in the Young Family Festival at Piterland, one of the biggest shopping and entertainment complexes in St. Petersburg, Russia on March 17, 2018. They introduced the practice of Falun Dafa and explained how the principles of Truthfulness-Compassion-Forbearance benefit families as well as society.

Many people were interested in hearing more about the practice and were surprised by the persecution of it in China. “Because a large number of practitioners have been detained and tortured in China, their children were often left on their own and sometimes become orphans,” explained a practitioner. 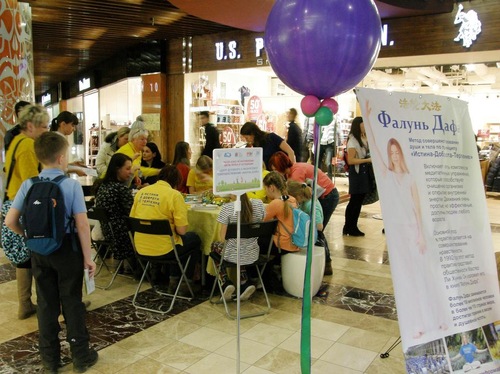 Practitioners at the Young Family Festival.

Mary, who works at a museum, and Alexia, an event organizer, were both curious about the principles of Truthfulness-Compassion-Forbearance and how they could help with the younger generation. In addition, they were eager to know more about the practice and to learn it themselves. They also planned to invite practitioners to future events.

Oleg, a writer and honorary guest at the event, talked with practitioners for a long time. Both Oleg and his wife had traveled to Asian countries previously, where they were exposed to Asian culture. The couple were saddened to learn that it is persecuted in China and sincerely hoped the persecution would soon end. 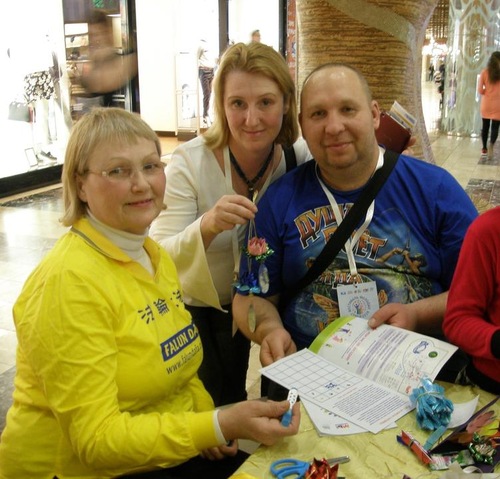 People learn about Falun Dafa from a practitioner.

Nastya and her father stopped by and asked practitioners about the practice. After a practitioner told them that they follow the Falun Dafa teachings to become better citizens, the father said that he was impressed by the determination of the practitioners to follow their principles.

“Please keep it up! The world will become a better place if everyone practiced those principles,” he encouraged.

“Minghui Report: 30 More Falun Gong Practitioners Reported to Have Died in 2017 as a Result of Persecution”