(Minghui.org) Today's news from China includes incidents of persecution that took place in 11 cities or counties in 7 provinces. According to this report, 4 Falun Gong practitioners were subjected to mistreatment during their detention, and at least 10 were illegally arrested. 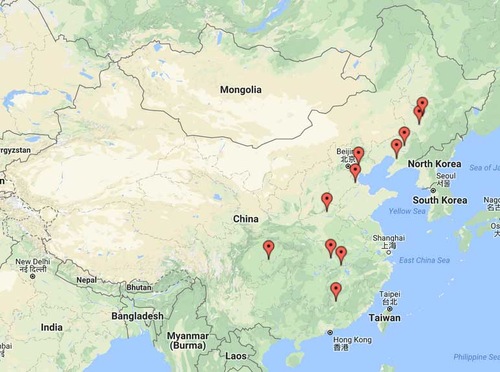 Mr. Huang Daqiang was arrested by officers from the Changchun City Police Department in mid-February. He was held in the Weizigou Detention Center, where he was to be detained for 15 days. His case has now been turned over to the Procuratorate.

Four or five officers from the Wutai Township Police Station broke into Mr. Peng Xiangyang's home in the No. 6 Group, Lujia Village and arrested him on the afternoon of February 13, 2018.

Mr. Peng was taken to the police station and was tied to a chair. Officers questioned him if he still practiced Falun Gong.

At the same time, the director of the station led officers to ransack Mr. Peng's home but did not find any incriminating evidence.

Mr. Peng was later taken back home by his family.

Ms. Zhang Xueqiong was reported to the authorities and arrested for distributing copies of the Nine Commentaries on the Communist Party on the afternoon of March 4, 2018.

Ms. Li Qihua, 61, has been held in the Ganzhou City Detention Center for over three months.

Ms. Zhu Xiurong from Guyihui Village, Woluogu Town, was arrested by three officers from the Woluogu Town Police Station on the afternoon of March 3, 2018, for talking to people about Falun Gong. She was beaten by the director of the police station.

Mr. Teng Yiquan from Tengzhuangzi Village, Tenzhuangzi Township, was spotted by patrol officers when he was hanging Falun Gong banners on the evening of March 1, 2018. The officers lured Mr. Teng to the Tengzhuangzi Police Station and took him into custody.

The test results indicated that Mr. Teng has tuberculosis and diabetes. The detention center refused to accept him, and he was taken back to the Tengzhuangzi Police Station.

The police ransacked Mr. Teng's parents' home but did not find anything they were looking for. Mr. Teng was released that evening.

Mr. Teng went to the police station on the afternoon of March 3, asking for his car to be returned. He was forced to pay 520 yuan for the physical exam before he was allowed to have his car back.

Elderly Ms. Yuan Qingmei was arrested on December 14, 2017. She was taken to the Xinxiang City Detention Center. The police are trying to have her imprisoned.

Ms. Song Lifang, 67, from the Jianghan District, was arrested in mid-February 2018 for distributing Falun Gong materials. Her whereabouts are unknown.

Ms. Liu Yanfeng, Ms. Liao Yuanhua, and Ms. Chen Xuezhen were there at the time and were also arrested.

Ms. Liu Jinying was arrested by officers from the Wenguan Police Station in the Dadong District on February 25, 2018, for posting materials about the persecution of Falun Gong. She is being held in the Dadong Detention Center.

Ms. Ma Suyuan was sentenced to an 18-month prison term by the Dashiqiao City Court. She was held in the Yingkou City Detention Center for six months before being taken to the Liaoning Province Women's Prison on February 27, 2018.