A February 19 article titled “China put pressure on the Royal Theater in case of persecuted dance group” published by Radio24syv, exposed an email revealing that “in August last year, the Chinese Embassy pressed the Royal Theater and asked the theater not to rent the theatre to the dance group Shen Yun.” Shen Yun is a New York-based performing arts company that is reviving traditional Chinese culture through music and dance. Shen Yun's performers draw inspiration from Falun Dafa, a spiritual discipline that has been severely persecuted in China since 1999.

Danish Parliament Member Rune Lund said in an interview with Radio24syv, "It is quite serious and inappropriate that the Chinese state is interfering with things that are completely legal in Denmark. Here in this country one must be able to express oneself either in writing or by expressing themselves – or by dancing. Therefore, the Chinese embassy should not come and put pressure on certain groups or people's rights here in this country." 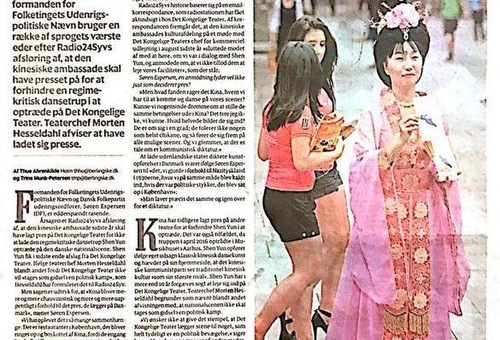 Screenshot of Feb. 19 article published in the Danish paper Berlingske, about the Chinese Regime's attempts to thwart Shen Yun performances in Denmark.

The Danish newspaper, Berlingske, followed up with the story the next day, publishing an interview with Søren Espersen, Danish People's Party's Foreign Rapporteur and Chairman of the Foreign Policy Committee.

In an article titled “Søren Espersen on Chinese press at the Royal Theater: 'What dirty tricks are they playing?',” Espersen said, “I'm simply furious about the way we just bow to the communist dictatorship. It is not right.”

According to the article, since 2007, Shen Yun has repeatedly tried to negotiate a contract with the Royal Theater.

In 2007, when the two parties were close to an agreement to hold two performances, the Royal Theater suddenly withdrew. It was later learned that the Chinese Embassy had brought the case to a meeting of the Ministry of Foreign Affairs, and shortly thereafter, the theater canceled any agreement with Shen Yun.

In an open letter to the Danish Ministry of Culture, Falun Gong spokeswoman Benny Brix said, “We hope that you can help us defend artistic freedom and freedom of speech in Denmark, thus rejecting the influence of a dictatorship in the heart of Danish culture.”

According to the article, the Ministry of Culture then asked for a comment from the Royal Theater. It appears from an email exchange between two staff members of the theater that the Chinese Embassy in August asked the Royal Theater to refuse Shen Yun access to the national stage.

"... I would like to mention that in August 2017 I met with the Chinese Embassy's Cultural Department as they are considering renting a stage to celebrate Chinese New Year in February 2018. They ended up asking whether we were in dialogue with Shen Yun, and requested that we not allow them to rent our facilities,” wrote a theater staff member.

In the article, Søren Espersen calls China's behavior "uncomfortable," and said that he has difficulty believing the Royal Theater's explanation that Shen Yun does not meet their quality requirements.

"I have not experienced the performance, but I know that Shen Yun tours the whole world with something that is of the highest artistic class, so it's a somewhat far-fetched explanation," he said in the interview.

“Falun Gong Events in the United States, Russia, and Finland”