(Minghui.org) Mr. Liu Fubin of Taikang County, Daqing City, Heilongjiang Province, is suffering from the effects of being tortured for not giving up his faith. The prison hospital refused to provide him adequate medical care, and prison officials have refused to release him on bail for treatment.

Mr. Liu has been serving a 10-year sentence in Ward 14 of Tailai Prison since February 2010.

To stop him from doing the Falun Gong exercises, guards and inmates restrained Mr. Liu on a metal bed frame with his arms and legs spread-eagle and cuffed to the sides of the frame during the entire month of March 2017. He remained in full restraints at all times regardless even he needed to use the restroom. The cuffs and shackles remained strapped on after he was taken off the metal frame. 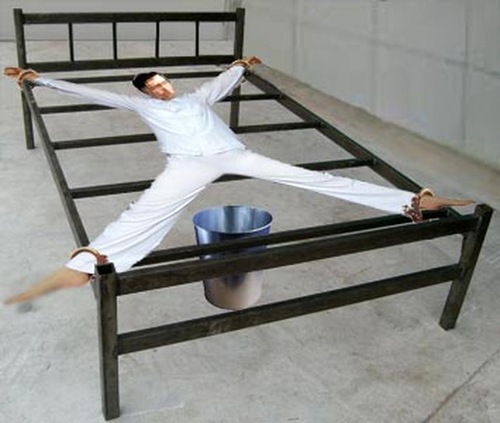 Mr. Liu was held in solitary confinement on June 2 for “violating prison rules.” He went on a hunger strike to protest. He vomited and had diarrhea after guards force-fed him on June 8. They repeated the force-feeding and he again vomited and experienced diarrhea.

He was taken out of solitary confinement on June 17 and could not ingest any food. The warden threatened to force-feed him by inserting a tube through his nostrils. Mr. Liu forced himself to eat, but the more he ate, the more he threw up. His condition worsened, and he even started vomiting after drinking water.

The family negotiated with the prison officials after they heard about his condition on July 13. They had Mr. Liu examined at the local hospital, and the family paid the medical expenses in August 2017. The hospital said he had nodules on his lungs, duodenitis, reflux esophagitis, and myocardial ischemia and that he'd had at least one lacunar stroke.

The family requested that the prison transfer Mr. Liu to a better hospital. Warden Chen Zhiguo, however, did not approve the transfer.

Mr. Liu's condition did not improve in September. The family again submitted a request to have him transferred to a bigger hospital. But prison officials said he was taken to a hospital in Qiqihar and that his condition resulted from a case of anorexia and an unspecified minor ailment.

When the family insisted that the transfer was critical, the prison finally had Mr. Liu taken to Tailai County Hospital. However, he was never treated there because the prison would not pay his bill.

The family went to the manager of prison affairs and gave him money to pay the bill. The hospital, however, said that they could not treat Mr. Liu. He was transferred to Harbin Administrative Hospital two weeks later.

The family went to Tailai Prison and requested the transfer. But the prison would only agree to his transfer with a down payment of 200,000 yuan for medical expenses.

The family visited Mr. Liu in Harbin Administrative Hospital on January 24, 2018. He was emaciated and barely able to raise his head. He was unable to keep down the food he ate and vomited immediately afterward. He could not take intravenous nutrition due to high fever complications. The hospital did not know how to treat him and had notified the prison to take Mr. Liu elsewhere.

The family then formally requested that Mr. Liu be released on medical parole, but prison officials have so far refused to approve that request.