(Minghui.org) Today's news from China includes incidents of persecution that took place in 9 cities or counties in 7 provinces. According to this report, 8 Falun Gong practitioners were subjected to mistreatment during their detention, and at least 8 were illegally arrested. 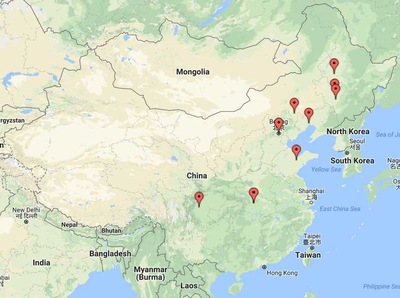 Mr. Li Lanqiang, an outstanding math teacher at Taipinglu Middle School, Haidian District, was recently taken to the No. 8 Ward, Beijing No. 2 Prison.

He was arrested and his home ransacked on April 20, 2016. He was given a three-year prison term and fined 7,000 yuan by the Fangshan District Court on October 27, 2017. He appealed. The Beijing City No. 2 Intermediate Court upheld the original verdict on December 14, 2017.

Mr. Liu Fubin from Taikang County was given a 10-year prison term and held in the Tailai Prison. He has been on a hunger strike since May 2017. He is in the Harbin Police Hospital. After being injected with unknown medicines he came down with a high fever.

Ms. Yu Yongqin from Binhe Township was arrested by officers from the Debiao Police Station on the evening of January 3, 2018. She was detained for 10 days.

Mr. Zou Shuwen from Binhe Township was arrested by officers from the same police station on January 11, 2018. He was detained for 10 days.

Ms. Tang Shuyan and her husband Mr. Jiang Guotao from Binhe Township were harassed by the same police officers.

Ms. Han Bing, 36, was arrested by officers from the Chongqinglu Police Station on July 13, 2017 for wearing a T-shirt with “Stop persecuting Falun Gong” printed in the front, and “Stop organ harvesting” on the back. She was held in the Changchun City No. 4 Detention Center.

Ms. Chen Yuzhi went to the Jinzhou Train Station Police Station to ask police for the return of the Falun Gong book Zhuan Falun, which they confiscated a month ago. She was arrested and her home ransacked. Four other practitioners were also arrested. The five practitioners were detained for nine days.

Falun Dafa practitioner Ms. Chi Xiaomei was arrested at home by officers from the Weifang Domestic Security Division on January 27, 2018. Her home was ransacked.

Ms. Shen Sufang, 77, was reported for telling people about Falun Gong. She was arrested on the afternoon of January 26, 2018. The police ransacked her home and confiscated Falun Dafa books.