(Minghui.org) Today's news from China includes incidents of persecution that took place in 8 cities or counties in 7 provinces. According to this report, 6 Falun Gong practitioners were subjected to mistreatment during their detention and at least 12 were illegally arrested. 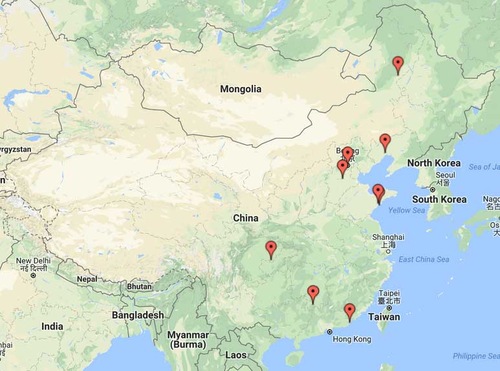 The chief of the Zhalantun City Police Department and other officers arrested Ms. Meng Huiling and 12 other practitioners on the afternoon of August 24, 2017. They ransacked the practitioners' homes and confiscated Falun Gong books, a notebook computer, and 5,000 yuan in cash from Ms. Meng.

Ms. Meng has been held in the Arun Banner Detention Center and abused. She was forced to walk in circles with shackles on her feet, and her ankles blistered and bled. She is facing a trial.

Ms. Song Yilian, 69, from the Development Zone, was arrested by officers from the Yinzhu Police Station on January 18, 2018, for telling people about Falun Gong.

The Qingdao City Intermediate Court upheld the original verdicts handed down to Mr. Shao Chengluo and his wife Ms. Gao Wenshu. Mr. Shao was sentenced to nine years in prison and his wife to four years.

Mr. Cai Chunpeng, 38, a senior engineer, was arrested at home by officers from the Chenghai District Police Department and the SWAT Team on the morning of January 3, 2018. The officers confiscated a computer and three cell phones. Mr. Cai is being held in the Baisha Detention Center.

Mr. Cai has been on a hunger strike for over 15 days. He is very thin and weak.

Ms. Liu Dongmei was recently sentenced to three years in prison and fined 6,000 yuan in the Gaoyang County Court. She has appealed.

Mr. Zhou Fangjun and his wife Ms. Zhu Lingyun were arrested at the end of 2016. Mr. Zhou was sentenced to four years in prison and Ms. Zhu to three years, with five years probation. Both appealed, but their verdicts were upheld.

Mr. Zhou was taken to the Wangling Prison in mid-January 2018.

They subsequently went to Ms. Zhang Xiuqin's home in Sifangtun Village, Shuangyang Town, and ransacked it.

“Everything Is Simple and Easy When We Consider Others First”