(Minghui.org) Han Shufen, a guard at the Qiqihar City Detention Center, is in charge of cells 406 and 407. She uses many cruel methods in her position of authority. She also extorts money from detainees and harasses them or orders other inmates to do so. She targets Falun Gong practitioners in particular and uses different torture methods to obtain what she wants from them.

When family members of inmates bring in clothing for them, Han demands 500 yuan to deliver the clothes. She demands bribes for everything she does.

Ms. Li Ying'ai, a Falun Gong practitioner, arrived at the detention center on September 28, 2013. When she refused to wear her uniform, Han grabbed her hair, dragged her out of the cell, and kicked her several times. Then, she ordered several inmates to carry Ms. Li into the hallway. In front of about five prison officials, Han told Ms. Li that she had to obey her. Han and the inmates proceeded to beat and kick Ms. Li. They then put 25-kg shackles on her and handcuffed her before she was carried back to the cell.

Ms. Yan Liju arrived at the detention center on September 21, 2014. Han made her wear 25-kg shackles for up to five hours and then made her wear “bondage” torture instruments at night.

Ms. Qu Shurong was taken to the detention center on November 11, 2015, and detained in Cell 407, No. 4 Ward. Han ordered a head inmate to bully the elderly lady. She was also not allowed to go to the restroom and was handcuffed for great lengths of time.

Ms. Zhang Yanhua was taken to the detention center on March 23, 2017. Because she refused to do hard labor and went on a hunger strike, she was beaten by three inmates. After Ms. Zhang reported the beating to Han, Han turned around and praised the inmates for their cruelty. Ms. Zhang said, “You are supposed to protect the law, not break the law!” Han turned around and yelled, “What did you say? Yes, I just did break the law!” She then ordered the three inmates to beat Ms. Zhang again.

Back in the cell, the inmates dragged Ms. Zhang to the restroom, stripped her, and poured cold water over her. They asked whether she would now decide to eat and do labor. When she refused, the inmates beat her chest and slapped her face. After she put on her clothes, she was beaten again and slipped on the wet floor. When she sat on her bed in wet, thin clothes, they kept the window open for more than an hour. At night, they made her sleep on the bare bed board with no covers.

Falun Gong practitioner Ms. Liu Huijie arrived in the detention center on March 24, 2017. For refusing to wear the prisoner uniform and performing hard labor, inmates and guards shackled her for three days and cuffed her hands behind her back for five days. Ms. Liu was taken to a hospital on March 26 for a round of force-feeding. Because Ms. Liu tried to tell a nurse there about the persecution of Falun Gong, Han slapped her face with both hands. Han’s nails cut through Ms. Liu’s face. 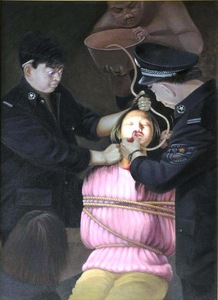 Participants in the persecution:

Once Imprisoned for Seven Years, Practitioner Zhang Yanhua Again Detained and Tortured for about Four Months

“Blindness Does Not Stop My Cultivation”