(Minghui.org) Today's news from China includes incidents of persecution that took place in 7 cities or counties in 5 provinces. According to this report, 10 Falun Gong practitioners were subjected to mistreatment during their detention, and at least 3 were illegally arrested. 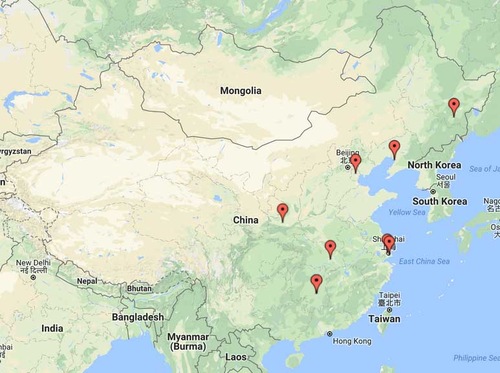 Ms. Yang Honghua was arrested and taken to the Qianmen Police Station on June 1, 2017, for protesting at Tiananmen Square in Beijing. She was detained overnight and then returned to Shanghai by three officers from the Jingan District Police Department.

She was held at the Jingan District Detention Center for 39 days and her home was ransacked.

Ms. Yang was arrested on August 2, 2017, and taken to Jing'an District Psychiatric Hospital by officers from the Jing'an District Police Department and 610 Office. She was given psychotropic drugs at the hospital, after which she was released.

Mr. Yao had been sentenced to five years in prison before the arrest. He was incarcerated at Tilanqiao Prison, where he was tortured.

Ms. Zhao Yueqin, who was arrested in March 2015, was tried four times by the Tanggu Court and sentenced to a four year prison term on December 14, 2017. The sentence called for supervision outside the prison because of high blood pressure.

Ms. Zeng Li'e was arrested at home by officers from the Shouyilu Police Station on January 6, 2018. She was held at the Erzigou Detention Center in Wuhan for 15 days, then transferred to the Yangyuan Brainwashing Center.

Ms. Gui Youyun, 78, and Ms. Zheng Yuliang, 76, were arrested by officers from the Shitan Police Station on January 19, 2018, for distributing Falun Gong informational materials about the persecution and talking to people about it. They were taken to the Hengdong County Police Department, where they were tortured on iron chair devices. Their were photographed and later released.

Ms. Zhang Hao was arrested by officers from the Qian County Police Department on December 3, 2017, for distributing materials about the persecution of Falun Gong. She was detained for 15 days and then taken to the Xianyang City Brainwashing Center.

Ms. Zhu Yanhua was arrested by officers from the Dong'an Police Department in Mudanjiang City on January 18, 2018. She was held at the Mudanjiang Detention Center for ten days.