(Minghui.org) Today's news from China includes incidents of persecution that took place in 14 cities or counties in 8 provinces. According to this report, 7 Falun Gong practitioners were subjected to mistreatment during their detention, and at least 7 were illegally arrested. 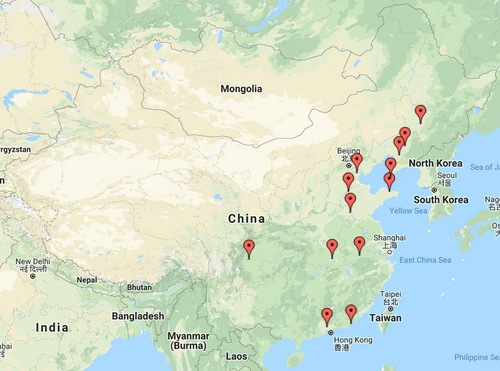 Mr. Cai Chunpeng, a senior engineer from Ximen Township in the Chenghai District, was sentenced on March 28, 2018. He was taken to the Sihui Prison, and has been on hunger strike for 300 days.

Mr. Cai was arrested by officers from the Dongli Border Police Station on December 18, 2017. He was tried by the Chenghai District Court, and was sentenced to an 18-month prison term and fined 2,000 yuan.

Ms. Jiao Huiping, from the Yanyuyishujiayuan Residential Community in the Beichen District, was arrested by officers from the Beicang Police Station and residential officials on the afternoon of November 20, 2018.

Mr. Lu Jin was arrested by officers from the Jianqiao Police Station on the evening of November 15, 2018, when he was talking to people about Falun Gong near the Causeway Bay Plaza, Zhongjia Village, Hanyang District. He was taken to the Hanyang Detention Center for five days.

Mr. Lu was secretly taken away by officers from the Jiang'an District 610 Office on the morning of November 20. His whereabouts are unknown.

Mr. Shao Jun, from West Chadaokou Road, Nanchang City, Jiangxi Province, was arrested at work on November 14, 2018, for distributing information about Falun Gong in Dongguan City. He is being held in a detention center.

Ms. Wang Guizhen, 55, was arrested by officers from the Fenjin Police Station in the Kuancheng District on November 11, 2018. She was held in the Weizigou Detention Center for ten days before being transferred to the Changchun City No. 4 Detention Center on November 21.

Ms. Huang Xiangling from the Xindu District was arrested at work on the morning of November 21, 2018.

Ms. Shi Ping was arrested at a high speed rail station on November 1, 2018. The security officers there searched her bag and found a few items with the words “Falun Dafa is Good, Truthfulness-Compassion-Forbearance is Good” written on them.

Ms. Shi was brought back to Tongling City, and detained for six days.

Ms. Zhang Xiumin, 50, was arrested by officers from the Taidong Police Station in the Rencheng District on November 19, 2018.

Mr. Sun Lihua was tried in the Laishan District Court on November 2, 2018. He was sentenced to ten months in prison, and has since appealed.

Ms. Qian Fenglin from Kangbao County was taken to the Shijiazhuang Women's Prison on October 19, 2018, but was not accepted due to health reasons. Her whereabouts are unknown.

Ms. Lan Lihua, from Hongling Town in the Sujiatun District, was arrested by Song Zhenghe, a deputy head of the Sujiatun Domestic Security Division, and other officers when she was distributing Falun Gong desktop calendars in a farmers' market on November 6, 2018. Her home was ransacked.

Ms. Jiang Lianxiang was arrested on November 12, 2018. Her Falun Dafa books were confiscated. She is being held in the Yaojia Detention Center.