(Minghui.org) Today's news from China includes incidents of persecution that took place in 10 cities or counties in 5 provinces. According to this report, 2 Falun Gong practitioners were subjected to mistreatment during their detention, and at least 12 were illegally arrested. 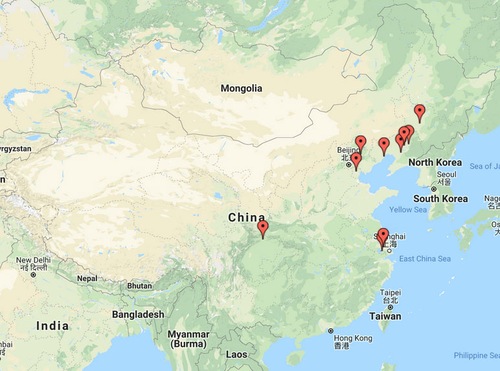 Ms. Jin Guizhen from Cuiyingzi Town was arrested on November 14, 2018 by three or four officers from the Sijian Police Station who had been waiting outside her home. The officers confiscated a bag of Falun Gong books.

Ms. Jin was taken to the Weizigou Detention Center. She was released because she had high blood pressure and failed the physical examination.

Mr. Li Guangqing was tried by the Cangxi County Court on the morning of November 2, 2018. During the trial it was mentioned that Mr. Li was to be sentenced to one and a half years in prison. When the court adjourned, Mr. Li was allowed to return home. He was arrested at home again later that evening.

Ms. Wang Jiahua, 56, from the Hongqiao District, was followed and arrested in late 2017 when she was talking to people about Falun Gong. The police ransacked her home and confiscated Falun Dafa books and printed materials. The officers also confiscated her payroll card, which has not been returned. Her whereabouts are unknown.

Ms. Wang Haiyan, in her 50s, from Hongqiao was arrested late December 2017. Her situation is unknown.

Ms. Xu Yafen and Ms. Shen Yunlan from Taicang City were arrested seven months ago. They were taken to a detention center, but were not accepted because they failed the physical exam. They were released on bail.

Ms. Xu and Ms. Shen's cases are currently under review by the Procuratorate, which is working on prosecuting the two practitioners.

Ms. Zhong Lifen, 71, was arrested by officers from the Fangta Police Station on August 30, 2018, for talking to people about Falun Gong. She was released later that evening.

Ms. Zhong was arrested again on September 19 and taken to the Changshu City Detention Center.

Ms. Zhong has been arrested twice before. After the first arrest, she was taken to a forced labor camp for three years. The second time, she was sentenced to ten years in prison and taken to the Nantong Women's Prison. She was released in 2016.

Ms. Jin Feng and a practitioner surnamed Ji were arrested when they were talking to people about Falun Gong on November 12, 2018. They have been held in the Chengde City Detention Center.

Ji is on hunger strike to protest the persecution.

Ms. Ma Enzhi and Ms. Wang Hong from Xinbin County were arrested when they were talking to people about Falun Gong on the afternoon of November 12, 2018. The police ransacked their homes and confiscated their Falun Gong books.

Both practitioners are being held in the Nangou Detention Center.

Ms. Lan Lihua was arrested by Song Zheng, deputy head of the Sujiatun District Domestic Security Division, on November 6, 2018, for distributing Falun Gong materials. She was interrogated at a police station. The police ransacked her home and confiscated two printers, a computer, Falun Gong books, and printed materials.

Ms. Lan was taken to a detention center, where she was force-fed and hung up so her feet could not touch the ground.

Ms. Yang Yufeng and Ms. Tian Surong, from the Lianshan District, were arrested by Chen Yulong, head of the Lianshan Domestic Security Division, and several other officers on November 7, 2018. They were taken to the Huludao City Lockup Center.

Ms.Yang was transferred to the Huludao Detention Center on November 14, while Ms. Tian is still being held in the lockup center.

“Improving Myself by Making Phone Calls to Clarify the Truth”