Sao Paulo, Brazil: Exposing the Persecution of Falun Gong in Front of the Chinese Consulate 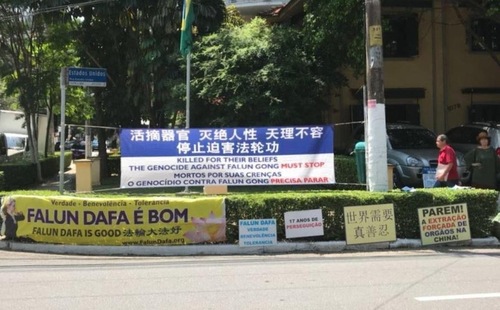 Since the establishment of diplomatic ties between China and Brazil, more and more Brazilians have been to China to travel, study, and do business. They wait in long lines in front of the Chinese Consulate for visas almost every day.

They were surprised to find out that the CCP has trampled human rights and controlled information so tightly. Many people thanked practitioners for telling them about the persecution. Some became interested in Falun Gong and learned the exercises on the spot.

One time, a businessman who was heavily influenced by the CCP said he supported the CCP's live organ harvesting and he believed only tyranny could make people be obedient. Everyone who heard it was shocked by his inhumane logic. Seeing how the CCP had brainwashed people abroad, practitioners further realized the importance of calling for justice and conscience.

The Chinese Consulate directed the district government office to take away Falun Gong banners. Practitioners went to talk to government employees and made more banners. Their steadfast efforts have exposed the CCP's persecution to more and more people.

A chairman of a Chinese association once told a practitioner, “What you are doing is political!” The practitioner replied, “Falun Gong has been terribly wronged and persecuted. We have the responsibility to tell people the facts and call for an end to the tragedy!” The chairman agreed and took some truth-clarification materials to read and gave the practitioner a thumbs-up.

Employees of neighboring businesses and nearby residents also support Falun Gong practitioners' activities. Rare Udumbara flowers have been found on the windows and walls of surrounding buildings which completely fascinated people. The tiny white flowers are said to only appear once every 3,000 years and signify a great cosmic event.

“The Various Ways My Jealousy Manifests”