(Minghui.org) The Chinese regime’s persecution of Falun Dafa has lasted for over 19 years. With all legal channels of protest blocked in mainland China, practitioners have adopted creative methods to approach people, tell them what Falun Dafa is about, and expose the Communist Party's hateful propaganda.

Practitioners in Taiwan explain the facts of Falun Dafa to Chinese tourists at over 40 tourist attractions throughout Taiwan. Thirteen of these tourist sites are located in Northern Taiwan.

During a conference held at a community center on December 23, 2018, practitioners involved in these efforts shared their experiences and understandings. 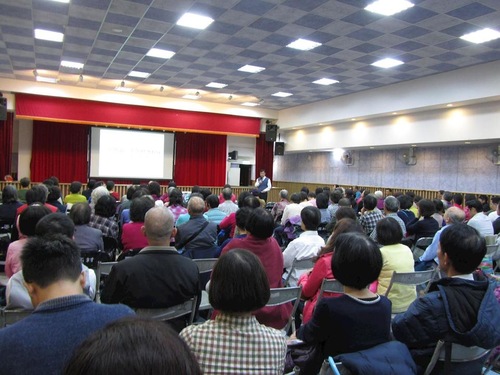 Practitioners in Northern Taiwan share their experiences of talking to tourists to help them break away from the communist party's propaganda.

Huiyi talked about how she overcame fear based on her understandings of the Dafa teachings. For example, depending on the situation, she may engage tourists using different ways to break the ice.

At the National Sun Yat-sen Memorial Hall, an elderly man was interested in reading the posters set up by practitioners. Huiyi asked if he had been to the changing of the guard ceremony and told him that practitioners were also available there to answer questions. She said although many people in mainland China have been misled by the hate propaganda, more and more people in Taiwan have started to practice Falun Dafa. After hearing how former Communist Party leader Jiang Zemin and his followers suppressed Falun Dafa practitioners and have even harvested organs from living practitioners for profit, the visitor agreed to renounce his membership in the Communist Party organizations he had joined.

Huiyi once saw a group of five tourists observing her. She directed their attention to a poster board next to her and explained why she was there. After hearing how the Communist Party killed people in previous political campaigns and was now persecuting Falun Dafa practitioners, all five tourists expressed their desire to sever their ties with the regime.

The art and shopping centers at Ximending and the landmark building Taipei 101 are also favorite places for tourists. Huiyi once met someone from South Korea there and gave him a copy of the Falun Dafa materials in Korean. The visitor replied in Chinese that he knew what this was about. It turned out that he had studied in China when he was young, and he had even become a member of the Communist Party's Young Pioneers organization in his childhood. Although the tourist now lives in South Korea, Huiyi explained that it is still better to renounce any membership in the Communist Party due to the oath he had made to give his life to the Party upon joining. The visitor accepted her suggestion and thanked her.

Tingyi commutes for about three hours on public transit so she can meet Chinese tourists at duty-free stores. She has been doing this for eight years, during which time she has overcome resistance from mainland China tourists, tour guides, and sometimes even criticism from other practitioners. The hot weather on summer days and the cold days in winter were other forms of tests for her. She did her best to handle these situations well.

Some tour guides were supportive, with one even saying, “These are my customers. Please tell them whatever you want to tell them.” Tingyi thanked him and greeted the tourists. She said they were lucky to have a good tour guide because not only did they have picturesque views to enjoy, but they were also able to hear valuable information that is unavailable in mainland China.

Explaining how Taiwan is different from mainland China, starting from how Taiwan has preserved traditional culture and freedom of belief, Tingyi explained how Taiwan provides an opportunity for mainlanders to access uncensored information, such as the facts of Falun Dafa. In addition, mainlanders could learn about the crimes committed by the Communist Party during the past several decades. Many tourists accepted the book the Nine Commentaries of Communist Party from her and thanked her.

Huiwen said practitioners' efforts at the tourist sites were like a relay. Even if a tourist did not agree to renounce their membership in the Communist Party organizations, he or she might do so at the next tourist site. The most important thing, she said, was to leave a positive impression so that tourists are willing to talk with practitioners again.

Xiuya gave a PowerPoint presentation and talked about her understandings and observations on how to interact with Chinese tourists at tourist sites. She said that one should let go of human notions, attachments to comfort, and other excuses to make the best use of opportunities. She also added that one should pay attention to how they dress and their overall appearance at the tourist sites.

Many practitioners said they found the conference very helpful. Guo Jiaming, a junior at the National Taiwan University of Science and Technology, said he often tells people about Falun Dafa on campus. “The target audience is somewhat different, and so are the approaches we take,” he explained. Nonetheless, he said that the requirements for practitioners and their improvement of moral character through the process are similar. He was touched by the sharing of practitioners on how to handle various situations from the perspective of cultivation practice, which helped him further understand the importance of such efforts.

Xu Yuting, a practitioner from Sanchong District, said that when talking with students and teachers on campus, the questions were often relatively easy to answer. But in front of tourists from mainland China, some questions were tricky, and on a few occasions, she did not know how to answer them. The discussion at the conference had helped her understand that those situations occurred not because of cultural differences but rather due to her poor understanding of the Communist Party and the Party culture. She also agreed with the importance of adhering to a dress code and said that all these aspects are good opportunities for young practitioners to improve.

“What It Means to Express True Concern for Others”

“Five Liaoning Falun Gong Practitioners on Trial For Their Belief”