(Minghui.org) Today's news from China includes incidents of persecution that took place in 14 cities or counties in 7 provinces. According to this report, 11 Falun Gong practitioners were subjected to mistreatment during their detention, and at least 15 were illegally arrested. 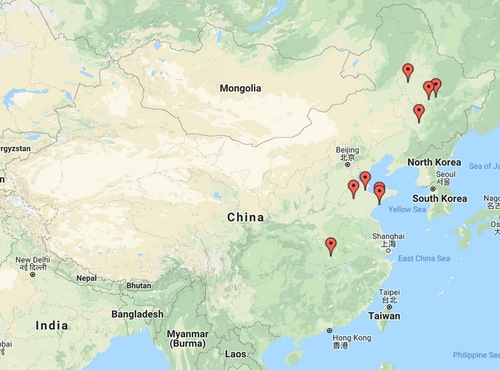 Mr. Liang Shuiqing was arrested by officers from the Wenhualu Police Station on November 14, 2018. He is being held at a detention center.

Mr. Gao Fuzhi of Bayan County was arrested at home by officers from the Xinghua Police Station in Bayan County on November 9, 2017. The Yilan County Court tried Mr. Gao on July 19, 2018, and sentenced him to three years in prison. Mr. Gao is still being held at the Yilan County Detention Center.

Mr. Jiao Kai was arrested by officers from the Yinqueshan Police Station in Lanshan District on October 4, 2018, for talking people in the area about the persecution of Falun Gong. He was detained for 15 days and released on October 19, 2018.

The Jimo City Court will hold a trial for Mr. Huang Gengji, who is from Shangguzhuangtun Village, Wangcun Town, in the Pudong Detention Center on November 16, 2018. Mr. Lu Yaogui, Ms. Wu Xiaoxia, and Mr. Wu Jianping, all from Xiongyasuo Village, Fengcheng Town, will be tried on the same day in the same location.

Mr. Qiao Jianjun was arrested on May 28, 2018. He has been jailed for six months in the labor camp at the Shawan County Police Department in Xinjiang.

Senior citizen Ms. Xu, first name unknown, was arrested by the Hongshan District police on November 6, 2018. Her Falun Gong books were confiscated, and she was detained for 15 days in a detention center.

The judge from Longcheng District Court and prosecutor from the Longcheng District Procuratorate went to Ms. Zhu Guixia's home on November 22, 2018, where she was tried and sentenced to four years in prison for practicing Falun Gong.

They told Ms. Zhu, who is in her seventies, that someone would come to take her for a physical examination in preparation for imprisonment.

Sihui Prison deprived Mr. Zheng Minghui of visitation rights after August 1, 2018. His wife went to the Zhaoqing Procuratorate in September 2018 and brought the complaint to the upper authorities, level by level. The prison subsequently reinstated Mr. Zheng's visitation rights.

Mr. Zheng’s wife Peng Peishan went to visit him on November 9, 2018 and noticed that his health seemed to have improved. However, the guards prevented Ms. Peng from suing the prison for the persecution of her husband. And they also tried to stop Mr. Zheng from telling his wife about the abuse to which he subjected in the prison.

Ms. Lu Sanxiu, in her seventies, was again sentenced to a three-year prison term. She was taken to the Jiangxi Women’s Prison in spring 2018, where she was forced to stand from morning until midnight. As a result, her feet became badly swollen. The prison authorities would not allow her to take a shower for six months. Her clothing became so dirty that she looked like a beggar.

Ms. Wang Guizhi, from Wanggang Town, Xishui County, Huanggang City, has been detained for more than one year. She is facing a trial on December 11, 2018.

Her husband became severely ill while she was detained. No one took care of him and he passed away. Ms. Wang was not allowed to see him before he died.

Ms. Zhang and Ms. Li Xiujuan’s families were phoned at 4:00 p.m. the day before the trial, and were told the trial would start at 7:00 a.m. If the family members wished to attend the trial, they had to get an official letter stating that they were not Falun Gong practitioners.

“How I Confronted the Labor Camp Guards Who Persecuted Me”