(Minghui.org) A once happy family in Tianjin was shattered when the husband was targeted for refusing to renounce Falun Gong, a mind-body practice being persecuted by the Chinese communist regime.

Mr. Meng Jie, 45, credits Falun Gong for returning him to health and giving him strength to care for his wife, who had been suffering from various health issues since childhood. He was given three years of forced labor in 2000 for practicing Falun Gong and repeatedly harassed by police after he was released. Most recently, he was told to appear in court on October 26 for his faith. It is unclear whether the hearing was held as scheduled.

Mr. Meng's wife has been deeply traumatized by her husband's ordeal. She lives in constant fear. She would panic at every knock on the door, wondering if it was the police. She would vomit whenever she feels scared. She does not dare to go outside by herself. At 47, she looks much older than her age. 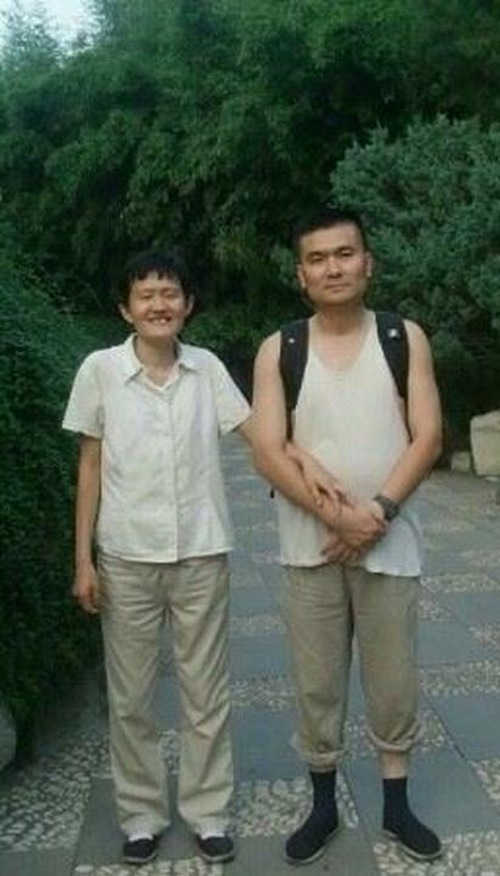 A Once Happy Family

Mr. Meng used to suffer from severe stomachaches and a tumor near the liver. Both problems disappeared after he began to practice Falun Gong, and his nearsightedness was also gone.

His wife, Ms. Ma Yi, suffered from scoliosis and other illnesses since a child. She had trouble keeping her balance and often fell. Combined with low self esteem and loss of her father at a young age, she was introverted and vulnerable.

She became better and happier after marrying Mr. Meng, who cared for her without complaints. The birth of their daughter brought her more hope and put smiles on her face.

Mr. Meng was arrested in early 2001 and sent to Shuangkou Labor Camp months later to serve a three-year term for refusing to renounce Falun Gong.

While in detention, he was once beaten into unconsciousness. After he came to, he kept vomiting blood and could not eat for many days. He was also forced to attend brainwashing sessions and do hard labor. He lost over 30 pounds in a short period of time.

His wife struggled to take care of their daughter, who was five months old when her father was arrested.

Ms. Ma broke down both mentally and physically. Neurasthenia made her unable to sleep well and she was often in a trance. She became more sensitive, fearful, and suspicious of the outside world, and she hardly dared to interact with anyone. She later developed visual and auditory hallucinations.

After her husband was released, Ms. Ma's condition improved some. But she still was fearful and worried that her husband would be arrested again someday. Her symptoms also got worse whenever police or neighborhood committee officials came to try to pressure her husband to give up his belief.

For several years, Ms. Ma didn't dare to stay home alone when her husband went to work and her daughter left for school. She would sit on a small stool in the hallway of their apartment building or by the roadside, until Mr. Meng returned home. It went on like this all year long, rain or shine.

Later, Ms. Ma dared not even step outside without asking her husband or daughter if it was safe to go out.

Latest Harassment Another Blow to Family

Wang Xiaolu and several other officers from Tianta Police Station showed up at Mr. Meng's home on November 14, 2016. They confiscated his personal belongings without presenting any ID or warrant. Two days later they returned to ransack their home again.

Mr. Meng received a phone call from the police on May 17, 2017, demanding that he and his wife visit them for an interrogation. He refused, only to see officers descending upon his home shortly afterwards. They questioned Ms. Ma without her husband's presence and forced her to sign the interrogation record.

They then took Mr. Meng to the police station and said, “Considering your condition (bedridden wife), we will not arrest you. But you must cooperate with us and sign documents required for our prosecution of you.”

In July 2018, Mr. Meng was forced to pay 2,000 yuan and sign a “release on bail” document. Two months later, a staff member from Hexi Court called, threatening to put him on trial if Mr. Meng did not admit guilt.

The repeated harassment from officials aggravated Ms. Ma's condition. She would vomit whenever she was stressful or afraid. Her health deteriorated. She often lost control of her bowel movements. Together with her vomiting, the floor in her apartment was often messy until Ms. Meng returned from work to clean it.

Ms. Ma's teeth were severe damaged by the gastric acid induced by her constant vomiting. As she also suffered from osteoporosis and malnutrition, her teeth fell out one by one. She has only one tooth left now.

Ms. Ma also becomes constipated as her condition forced her to stay in bed for long stretches of time. Each time, Mr. Meng has to use his fingers to help her dig out the stool.