(Minghui.org) Canadian Parliament Member Garnett Genuis made a motion for Senate Bill 240 on the House floor on Tuesday. The bill, an act to amend the Criminal Code and the Immigration and Refugee Protection Act (trafficking in human organs), was thus first read in the House of Commons. 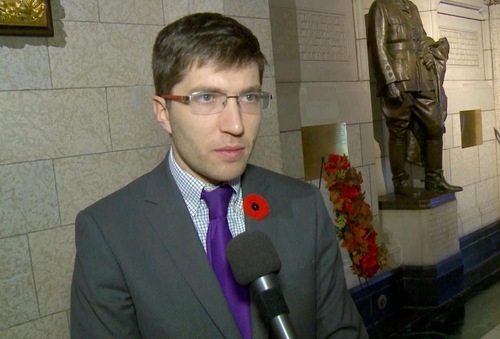 In a statement made on Monday, MP Genuis said, “For 10 years, members of Parliament have been trying to pass legislation to address the scourge of international organ trafficking. My colleague, the member for Etobicoke Centre, as well as former Liberal MP and justice minister Irwin Cotler, both presented bills on this issue in the previous Parliament. None have passed until this point though.”

Genuis commended the work of the Senate, and Senator Ataullahjan in particular, for getting Bill S-240 through the Senate and perfecting the bill.

“This is further than this bill has ever made it before, but it is critical that we pass this legislation in this Parliament, so we do not have to start all over again.” said Genuis. “I hope we will finally be able to get this done in this Parliament.”

The bill has two key points. First, it makes it a criminal offence for Canadians to go abroad for an organ for which there is no consent by a donor. Secondly, it designates individuals inadmissible to Canada if they have been involved in this heinous practice.

While China's state-sanctioned organ harvesting is targeted by this legislation, Genuis said the bill has been written to address potential future problems in other countries.

“I think that every Member understands that certainly the biggest problem in this respect by far are the actions of the Chinese Government,” said Genuis.

“This Bill will make it illegal for somebody to go abroad to receive an organ for which there is no consent,” he said. “We hear of cases where someone might book a heart transplant in China and they are booking a heart transplant a month in advance knowing that a particular organ will be available on a particular day and that obviously cannot happen, but for the killing of that person at a scheduled time before the transplant takes place.”

Genuis said that while the bill does not solve the whole problem, “it addresses the possibility of Canadians being complicit in this problem and it increases the international pressure.”

Regarding the likelihood of the bill making it to the finish line, the lawmaker said, “I am fairly confident that even if the Cabinet were to oppose this, there will be enough individual Liberal Members of Parliament breaking ranks and we would get it passed. The question is timing. And hopefully the government will support it. So we will have unanimous support in the House to move the Bill along very quickly.”

During the first reading by parliament on October 23, eight lawmakers spoke in support of the bill.

MP Scott Reid said, “I too am rising with a petition in support of these two bills, one from the Senate and one from the House. The issue of organ harvesting to which attention is drawn by the petitioners is one that has resulted in the deaths of many thousands of involuntary donors of organs, prisoners whose organs are harvested in an abuse of human rights that has had no parallel since the abuses of the Nazis in the Second World War. We need to try to stop this. That is what the petitioners want us to do, and these bills would help accomplish that goal.”

Genuis said passing the bill is urgent in order to save lives. He said, “It is very important for Canada to take this stand and join other countries that already have.”

“Miracles Happen When We Believe in Master and Dafa”