(Minghui.org) The program “Discovery: China’s Organ Transplants,” by reporter Matthew Hill of BBC World Service, has been repeatedly broadcast on BBC Radio and TV. Mr. Hill and several presenters discussed two questions: What is the source of China's organ transplants? Has the live organ harvesting from Falun Gong practitioners and other prisoners of conscience stopped? 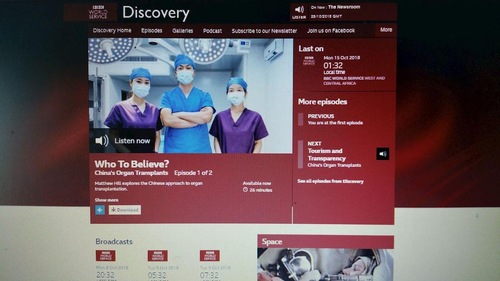 BBC broadcast “ Discovery: China’s Organ Transplants” by reporter Matthew Hill on August 15 and 22, 2018. The titles of the two episodes are, “Who to Believe?” and “Tourism and Transparency.” 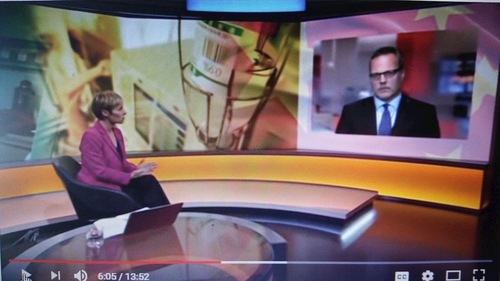 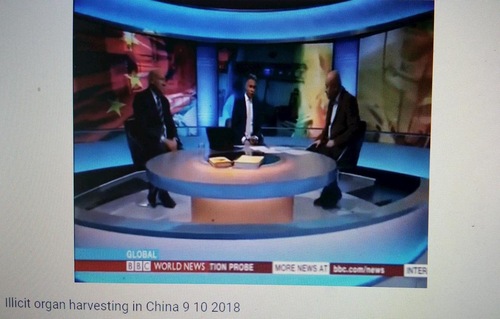 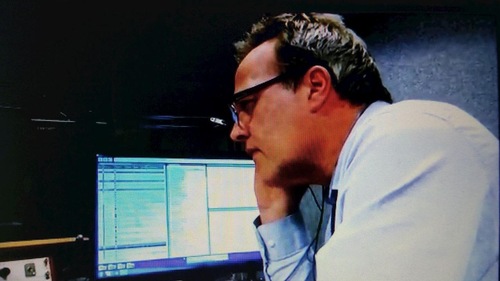 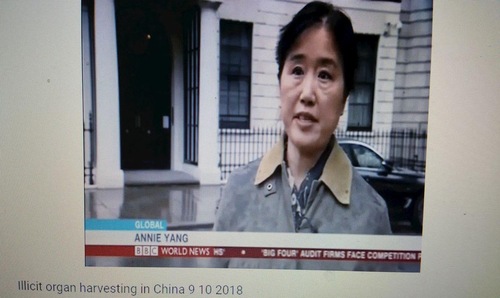 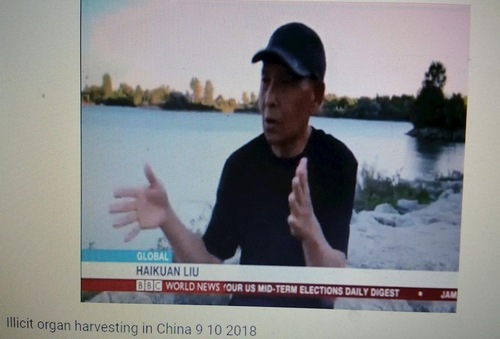 The focus of Mr. Hill's investigation was whether the CCP is still conducting live organ harvesting from Falun Gong practitioners or other prisoners of conscience. He interviewed Falun Gong practitioners Ms. Yang and Mr. Liu, who were incarcerated in China for their belief. Both practitioners talked about how they suffered as a result of the CCP's persecution. Both said that they were periodically forced to undergo medical examinations.

Ms. Yang recalled that in 2005 she was detained in a Beijing labor camp for 18 months. She said, “They checked my body every three months. They took all these Falun Gong practitioners to the hospital. The hospital belongs to the police department and is very near the labor camp. The medical examinations included X-rays of our chests, liver examinations, ultrasound B scans, and blood tests.”

Mr. Liu was released last year. He said, “I was subjected to medical examinations several times while I was imprisoned. Blood was collected. All Falun Gong practitioners are forced to renounce their belief. If you do not yield, the prison guards beat your arms, legs, and buttocks, but not your vital organ areas.”

In the program BBC Impact, Mr. Hill explained to Philippa Thomas why the CCP wants to persecute prisoners of conscience and Falun Gong. The CCP considers anyone outside the control of the state and any minority groups to be threats.

When the number of Falun Gong practitioners reached 100 million people in 1999, the CCP viewed them as a great threat. First they were slandered by the Communist Party, and then they were detained on a large scale.

The United Nations Special Rapporteur on Torture noted that Falun Gong practitioners who adhere to peace and faith were being tortured in detention centers.

Mr. Hill referred to the independent investigation report by David Kilgour, Canadian former Secretary of State for Asia; David Matas, Canadian human rights lawyer; and Ethan Gutmann, a senior reporter from the U.S. They were interviewed in the BBC program, “Who to Believe?” They reminded viewers that the CCP persecutes prisoners of conscience not for money but to carry out cruel genocide.

He continued, “Short waiting time. People come when they want and get organs almost immediately, which meant somebody was killed for their organs.”

David Kilgour said, “If you are considered an enemy of the state, then your life is valueless. That's the problem. For the Tibetans, Uighur, and some house Christians, especially Falun Gong, there are lots of reports.”

Ethan Gutmann said, “It's about (how) the state destroys its enemies. The money is an incentive for this to happen.”

What is Falun Gong and Why Does the CCP Persecute It? 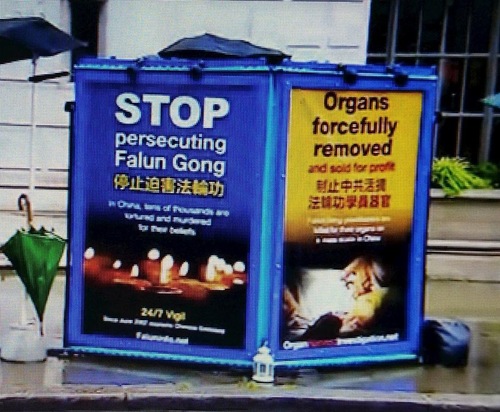 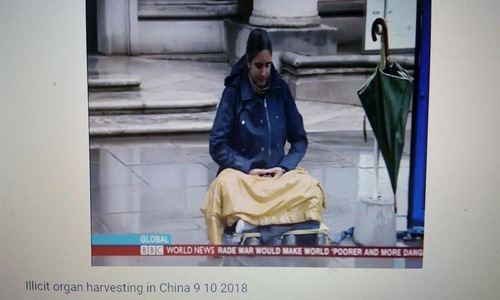 A Falun Gong practitioner joins the peaceful protest in front of the Chinese Embassy in London. 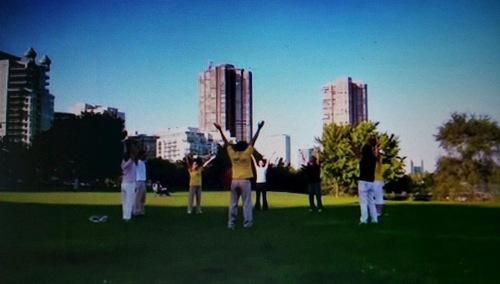 Practitioner Liu and others do the Falun Gong exercises.

Mr. Hill described Falun Gong as, “A spiritual movement based on meditation,” which is banned by the CCP. 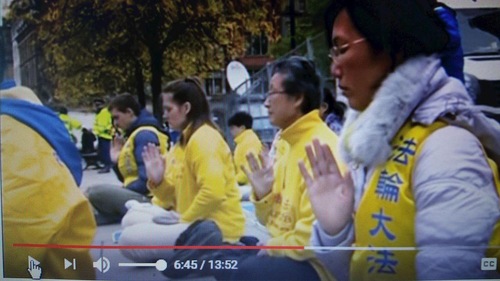 The episode, “Who to Believe?” was first broadcast on October 15 and was widely listened to by BBC Radio audiences. Falun Gong was introduced in the first program, “In 1999, people involved in the practice of Falun Gong in China found themselves under suspicion.

“The movement began with a form of traditional Chinese qigong and meditation, and became hugely popular across Chinese society. It is easy to say that they were never to be a target of a political oppression simply by being a large group operating outside the all-controlling Chinese state system.

“It is hard to believe that the people undergoing this slow-motion workout constitute a dire threat to the state. But the size of the group followers worries the government. Falun Gong boasts one hundred million members.

“Many involved were rounded up and put into reeducation camps, imprisoned for a couple of years or until they renounced their beliefs. And with their alcohol and drug-free lifestyles, Falun Gong followers claim they are easy pickings for state-sanctioned trade in organs. They and other religious groups, including Christians and Uighur, are being murdered to harvest their organs.”

In the program BBC Global on October 8, 2018, Enver Tohti, a former doctor in Xinjiang, described how he extracted organs from an executed prisoner in 1995. When Mr. Hill asked him how he could do that as a doctor, Tohti answered that at the time, everyone in China was brainwashed, and they thought everything they did was for the country.

An excerpt from Mr. Hill's and Enver Tohti's interview on BBC Global:

Hill: “Why did you cut through?”

Enver Tohti: “Because I was told to remove his liver and two kidneys.”

Hill: “Could you disobey the orders?”

Enver Tohti: “No. Living in China, everyone works for the state. So you have to obey orders. Otherwise you are out of the society, treated as an enemy of the state, and subject to receiving the brutality of the CCP.”

A man who was a medical school student in China in the 1990s pointed out, “We know the organs are from the executed prisoners. That's an open secret. Everybody knows. But we also often heard that organs are harvested from prisoners that are officially executed but actually not dead.

He continued, “Now there are also several such cases published. Doctors want organs to be of high quality. They asked police not to shoot the head, but the right chest. So the heart was still beating. The organs are infused with blood. And the organs were extracted from a live body.”

“How did you hear? From whom?” asked Hill.

“From teachers, students, and some doctors. They all know.”

“Did you think it was wrong?” Hill asked.

“At that time in China, under the circumstance of communist education, we talked about it among us students in private. We felt uncomfortable but could tolerate this. We thought the criminals would die anyway. The doctors got better quality organs.”

During the program about Mr. Hill's investigation, he referred to a South Korean television station reporter who went to a hospital in Tianjin that provides organ transplants for Koreans.

The reporter talked to hospital staff. A nurse told the reporter that they had transplanted a pancreas, three kidneys, and four livers on the previous day. The Korean patient recipients had traveled to China on three-month tourist visas.

One can hear a patient telling the reporter, “We are neither registered nor on the waiting list. As long as you have money, you may survive.”

Mr. Hill himself called a hospital in Guangzhou to ask about a liver transplant. He was told that the price was $100,000 and that he should provide information about his illness and then wait to be contacted. 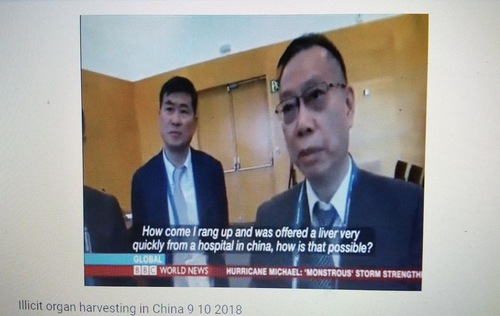 Mr. Hill later interviewed Huang Jiefu, who in his position as the former Vice Minister of Health in China, allegedly carried out live organ harvesting. He directly asked Huang, “How is it that when I phoned a hospital in China, I was quickly offered a liver? How was that possible?” Huang Jiefu did not answer and left.