(Minghui.org) This report covers recent activities held by Falun Gong practitioners in Europe, ranging from art exhibitions, free workshops at community events, passing out materials in public, and convincing Chinese people to quit the Chinese Communist Party (CCP) and its affiliated organizations. Practitioners' goals are simple: they want to tell people how Falun Gong has benefited millions of people physically and spiritually, and meanwhile, they want to expose the brutal persecution in China and ask for help to stop it. 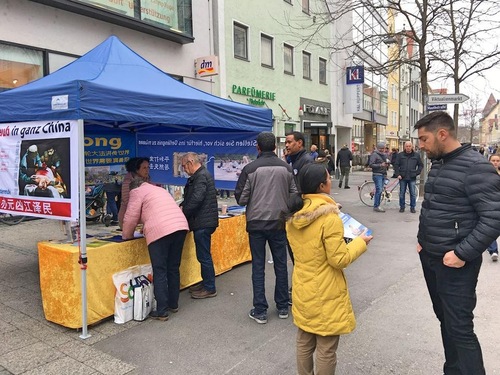 People stop at practitioners' booth to talk and sign the petition. 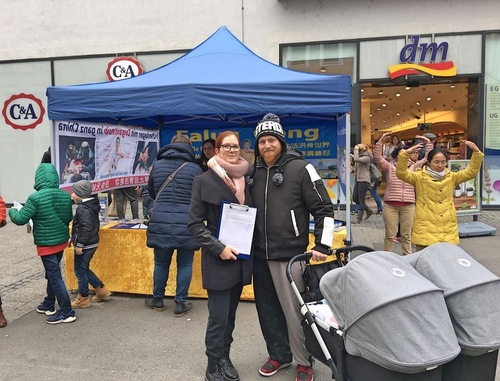 Levin and his wife

Levin and his wife were shocked by the brutality of the persecution. Levin believes that the persecution should be known the world over. “Although I don't experience the persecution, I feel the pain,” he said, “it was launched by a state government, and it affects everybody.” He hopes that the new German Minister of Foreign Affairs would speak against this persecution on his trip to China this week. 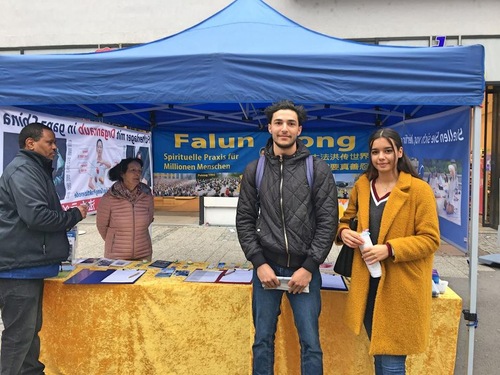 Ulucay hopes her signature will help to stop the persecution. Her friend, Dasdemir, said every European citizen has the responsibility to sign the petition. “The minister, who is visiting China should help Falun Gong practitioners. He should tell the Chinese officials, loud and clear, that if the persecution continues, Germany will stop trade with China. The German enterprises should also help improve human rights in China,” Dasdemir said.

In Munich, Germany, practitioners have been holding activities at famous tourist destinations every Saturday since April, aiming to help Chinese to see the evil nature of the CCP and help them to withdraw their memberships in it. 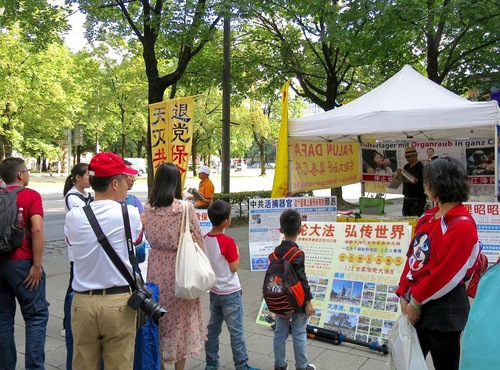 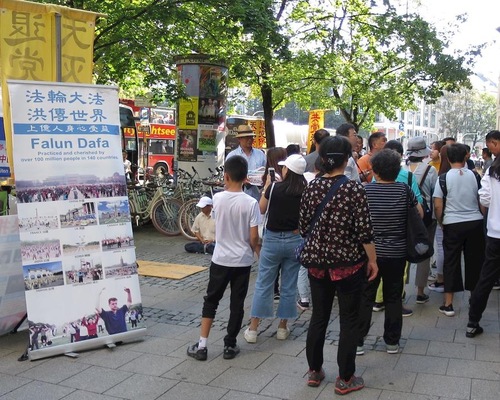 Practitioners have run into many high ranking Party officials who are aware of the Party's corruption and agreed to quit the CCP on the spot.

Practitioner Ms. Chen said once she talked to a retired Party official who was in charge of suppressing local Falun Gong practitioners. The official told Ms. Chen, “I don't believe what the Party says. I know many guys who were actively involved in the persecution of Falun Gong. None of them had a good end. Some died because of cancer, some died because of accidents. Good meets good, and evil meets evil. It is so true.”

He added, “I know a lot of Falun Gong practitioners, too. They are honest and reliable. I trust them. I like to hang out with them. You don't have to worry about anything when doing things with them.”

He asked his friend to take a picture of him with a Falun Gong banner in the background.

Eighty-year-old practitioner Ms. Pan also has many such stories.

“People changed their attitude about Falun Gong after they read our materials,” she said. “Many took pictures; many thanked me for telling them the truth.

“More and more Chinese have started to realize that love for China is not the same as love for the CCP. These are different concepts,” she added.

Last Saturday, practitioners in Stockholm set up a booth at the Mynttorget Plaza, a famous tourist destination, introducing Falun Gong to tourists from all over the world. 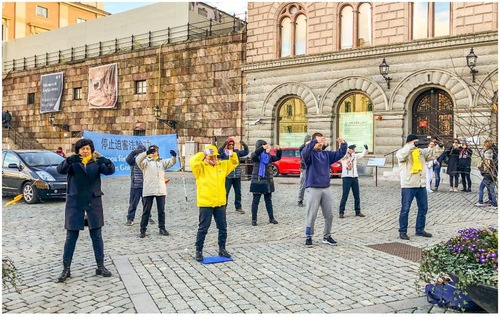 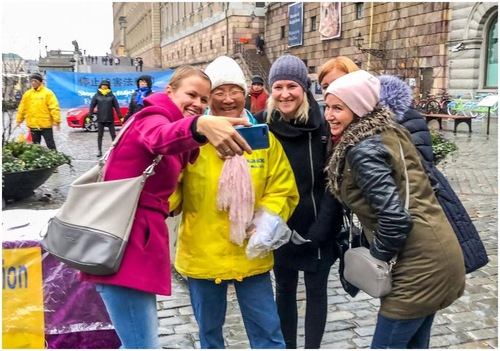 Four girls like a practitioner's yellow jacket with the characters: “Falun Gong is good” 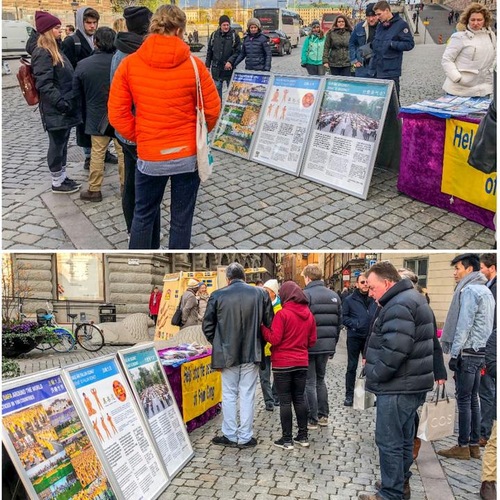 Holding an umbrella, a Swedish lady talked to practitioners for a long time. She likes Falun Gong's principles of Truthfulness-Compassion-Forbearance. She has been to China many times, and she had planned to visit China in the future. But after seeing practitioners, she decided to boycott the Chinese government's brutality by canceling her travel plans.

Another senior Swedish man echoed the lady's view, “China has been ruined by the communist party. This is a tyrant in power. It does not allow people to have their own thoughts. Fewer and fewer people still believe in communism. It is true in the U.S. and in Europe. People should not be deceived by it anymore.”

From November 2 to 4, practitioners from Copenhagen participated in a local health expo, introducing Falun Gong to the attendees. 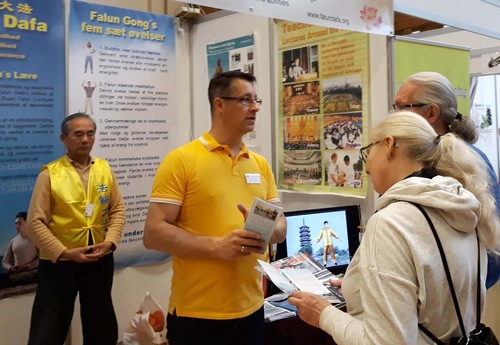 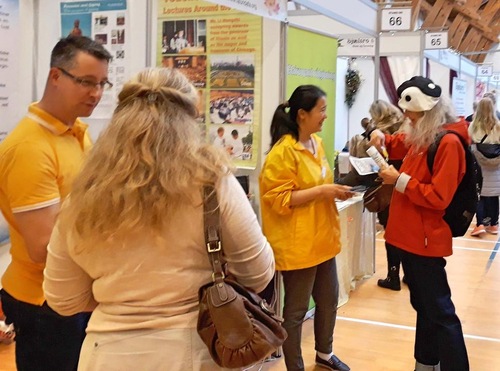 Practitioners' booth at the expo

Many people stopped by practitioners' booth and learned about this practice. Two ladies said, “I can feel that your energy field is different than others. Very comfortable and peaceful. I really want to live in such an energy field forever.”

Another young lady said, “I visited all the booths here. Only here I found help. When I passed by your booth, the pain in my back was relieved.” She talked to the practitioners about joining a regular practice site. 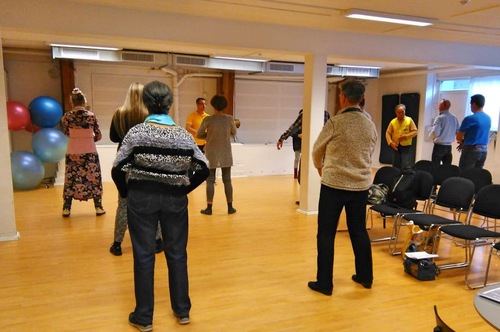 Teaching the exercises at a free workshop

At the expo, practitioners also held a free workshop teaching the exercises, which attracted many people.

A father was happy to see that his daughter was interested in learning the meaning of Truthfulness-Compassion-Forbearance. He said, “I heard about Falun Gong, but never had a chance to find out the details. Recently, I ran into Falun Gong several times, and today I see you. I believe this is the arrangement by the universe.”

Practitioners in Russia held a Truthfulness-Compassion-Forbearance art exhibition in Angarsk, Siberia for the third time on October 23. 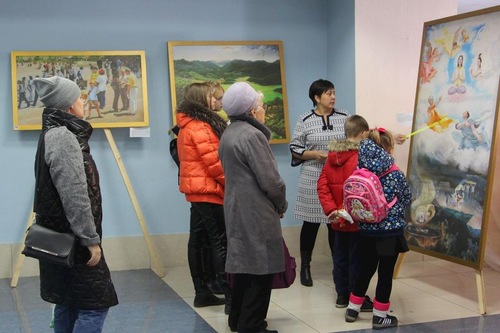 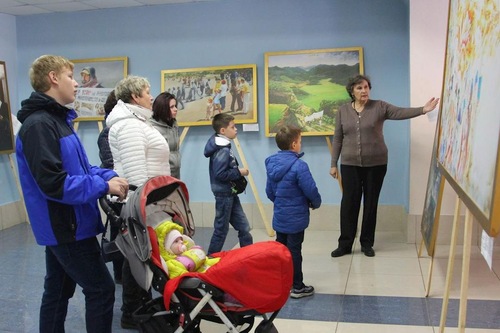 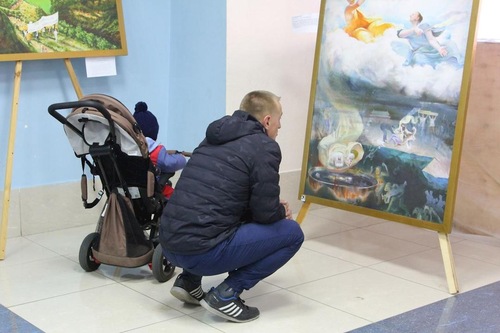 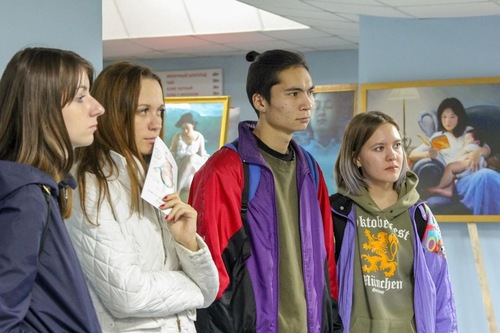 Attracted to the paintings

Waves of visitors came to the exhibition. Some of them came for the second time with questions. One of them said, “This is the most meaningful art exhibition I've ever been to. I hope it will come again in the future.”

After seeing the paintings that convey the message of Truthfulness-Compassion-Forbearance, a local woman brought her daughter to the exhibition, hoping the paintings will improve the relationship between them.

Matvey Averyanov said, “Although I don't know too much about Falun Gong, I can tell from the paintings that it is a pure, compassionate, and bright practice. It points out the problems in the world.” He thanked practitioners for holding the exhibition.

Irina said she was surprised by the beauty of the artworks. She likes the interpretation by the practitioners, “One should be compassionate to others, forgive others, and help others. This way, one's heart will become rich.”