Mother of Canadian Resident Sentenced to 3.5 Years in Prison for Her Faith

(Minghui.org) A Canadian resident's mother was sentenced to a 3.5 year prison term in early September 2018 for practicing Falun Gong, a spiritual discipline persecuted by the communist regime since 1999.

Ms. Chen Huixia, a resident in Shandong Province, was arrested on June 3, 2016 while attending a gathering of Falun Gong practitioners in Shijiazhuang City, Hebei Province. She was tortured at the Dongyuan Police Station and forced to watch brainwashing videos that slandered her faith.

Her daughter, Ms. Lu Hongyan, an Ottawa resident, called for her release at a rally in Edmonton, Canada on July 23, 2016.

Ms. Lu said, “My mother was put in solitary confinement for over 20 days. There was no bed, just a single metal chair. She was tied to the chair and subjected to constant brainwashing. My mother is very weak and cannot walk.”

More than one month after Ms. Chen's arrest, the police put her on criminal detention and transferred her to the Shijiazhuang No. 2 Detention Center on July 15.

The authorities denied her family visitation and phone calls. The police also withheld her personal belongings valued at more than 100,000 yuan, which to this day haven't been returned to her.

To rescue her mother, Ms. Lu and her husband started a car tour from Edmonton, and proceeding through Eastern Canada, seeking help and support. They also spoke at several rallies and held press conferences about her mother's case.

The Yuhua Court in Hebei Province held two hearings for Ms. Chen, on May 12, 2017 and January 4, 2018. Her family wasn't notified until less than 24 hours before each hearing.

Ms. Chen received her 3.5-year verdict in September 2018. Her lawyer submitted her appeal to the Shijiazhuang Intermediate Court, but he hasn't been able to get in touch with Wang Feng, the judge assigned to the case.

Ms. Lu said it has been eleven years since she last saw her mother. Being a Falun Gong practitioner herself, she faced the danger of arrest and torture herself if she returned to China. She is now very worried about her mother. 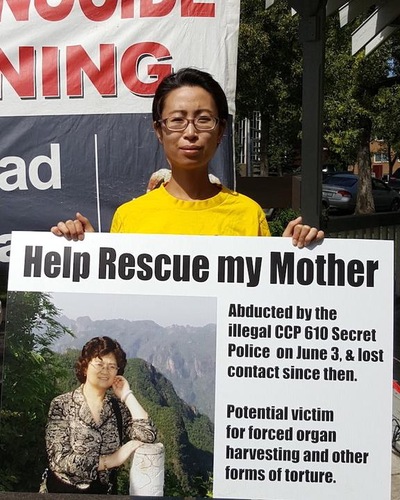 Ms. Lu Hongyan calls for her mother's rescue from unlawful detention in China during a rally in Edmonton on July 23, 2016. 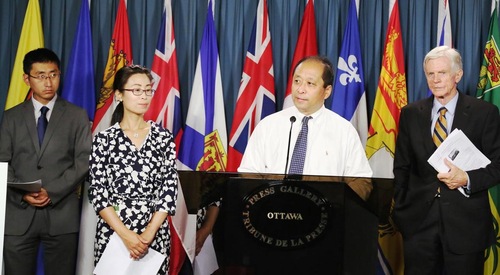 Ms. Lu attended a press conference in Ottawa to call for her mother's release on August 26, 2016.