(Minghui.org) Ms. Cui Yingshu, 56, the principal of Korean Gimhae No.2 National Elementary School, is quite admirable in many people's eyes. Her husband, a teacher, often helps her do housework. Her mother-in-law cooks delicious food for them. Moreover, she has two high-achieving children, a son and a daughter. As a wife, mom, and mother-in-law, she is leading a very peaceful and happy life. Smiles always accompany her. 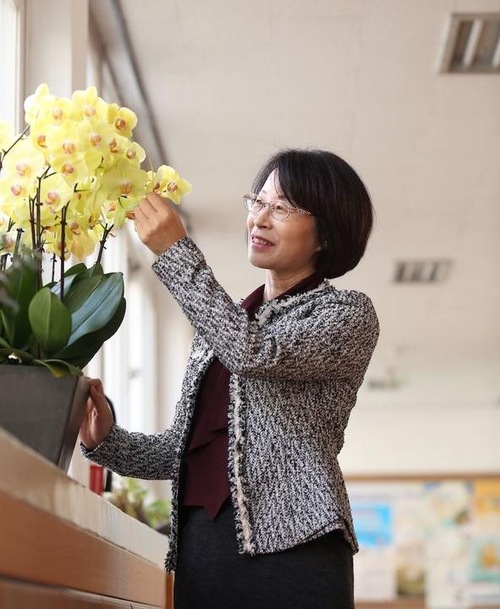 No one knew that 14 years ago Ms. Cui was weak and suffered from many diseases. She carried medicine wherever she went, because she was in pain from head to toe. Her daughter also suffered aplastic anemia and relied on blood transfusion therapy.

“At the time, it seemed I had been struck by lightning on a cloudless day,” Ms. Cui said as she recalled the past. “I looked everywhere for treatment for my daughter, with no positive outcome. As a mom, I never gave up and always hoped that one day a miracle would happen.”

The head of a pharmacy that Ms. Cui and her daughter often visited introduced her to Falun Gong and said the practice was good for one’s health.

“I walked onto the path of cultivation practice even though I still had doubts about it at the time. What I didn’t expect was that it became the path for my lifetime,” Ms. Cui said.

Ms. Cui's recalls how her health improved dramatically after she started practicing Falun Gong: “Before I practiced cultivation, I had to take nutritional supplements when the seasons changed. A Chinese doctor who regularly checked my pulse said all my internal organs were extremely weak and I would become even worse at age 40. Now, 14 years have passed. Since then, I have never taken any supplements, nor have I seen a doctor.”

Ms. Cui made great changes after she practiced Falun Gong. From Zhuan Falun, the text that guides practitioners in cultivation, made her understand the root of human illnesses and how to eradicate it. The book also helped her to stop worrying about her daughter's illness.

“After I practiced cultivation, all kinds of bad feelings—irritability, fear, pessimism and dislikes—weakened in a very short period of time. In the past, I constantly worried about my daughter's illness. After practicing cultivation, I miraculously let go of my depression. I was filled with gratitude toward Falun Dafa,” Ms. Cui said.

As Ms. Cui disciplined herself by following the Falun Gong principles of Truthfulness, Compassion and Forbearance and practicing the Falun Gong exercises regularly, she gained not only physical health but also a more harmonious family. She began to get along with everyone. At work, she was promoted to school principal.

“What's best, my daughter also took up cultivation practice in Falun Gong. More than ten years have passed. She is now enjoying a very healthy life and has started her own career,” Ms. Cui said gratefully. “My gratitude toward Master Li Hongzhi is beyond words.”

‘I hope people in China can freely practice Falun Gong’

As an educator, Ms. Cui believes that Falun Gong can help people recover their lost humanity in this material world. However, the practice is persecuted by the communist regime in China. Ms. Cui was saddened when she talked about it.

“In China, it is still not allowed to speak in public that the Falun Gong principles of 'Truthfulness, Compassion and Forbearance' are good. Teachers and students in China are brainwashed. When they see the three characters, 'Truthfulness-Compassion-Forbearance,' they shiver and shun them.” she said.

“I hope that persecution of Falun Gong ends as soon as possible so that teachers and students in China can practice cultivation freely and follow the principles of Truthfulness, Compassion, and Forbearance. Not only would they gain health that money can't buy, but they would also improve their morality.”

“Father and Son Arrested a Total of 15 Times and Imprisoned 18.5 Years For Their Faith”

“Untying the Knots in My Heart: Breaking Free of the Net”