(Minghui.org) The 150th Italian Heritage Parade (formerly known as the Columbus Day Parade) took place in San Francisco on October 7, 2018. Falun Dafa practitioners were once again invited to the event, where their performances delighted spectators. 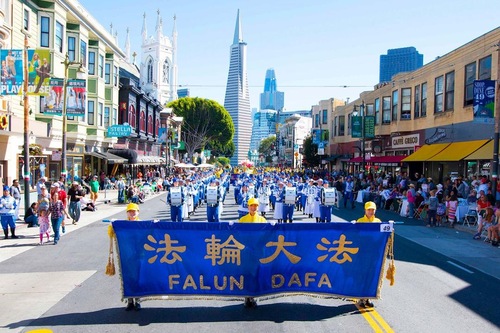 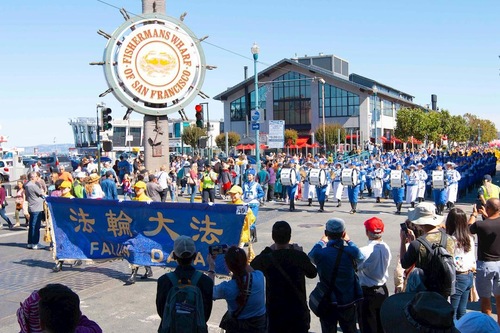 The Tian Guo Marching Band at the 150th Italian Heritage Parade on October 7, 2018.

The Falun Dafa entry this year included the Tian Guo Marching Band, a demonstration of the Falun Dafa exercises, a float, and waist drummers. As they passed the stage, the host explained that “members of the marching band practice Falun Dafa, a meditation system that cherishes the principles of Truthfulness-Compassion-Forbearance.” He said the group was one of the best and applauded the practitioners' efforts. 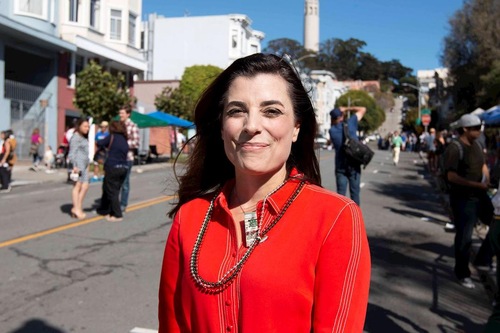 Amy Wilton, one of the organizers, welcomes Falun Dafa practitioners to the event again.

Amy Wilton, one of the parade organizers, praised the group’s elegance, peaceful melodies, and great coordination. “I am very happy to see them here again because they are so peaceful and wonderful,” she remarked.

Spectators: These Principles Apply to All of Us

Another organizer, Joe Leveroni, told practitioners, “Every year, the performances have become more beautiful and more spectacular. I congratulate you.”

Tina Derienzo, one of the spectators, agreed. She said she could feel the energy in the music and applauded the performance. “The principles of Truthfulness-Compassion-Forbearance apply to all of us,” she commented.

Greg Menna, a former drummer in a band, talked with practitioners prior to the parade. “These are nice, friendly people,” he said. “They keep the beat, and the band members are very talented.”

Former mayor Art Agnos gave the practitioners a thumbs-up. He was impressed by their perseverance and wished them well. 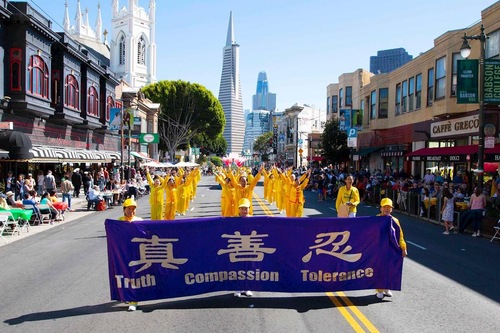 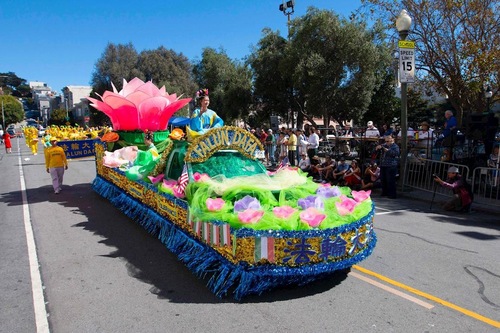 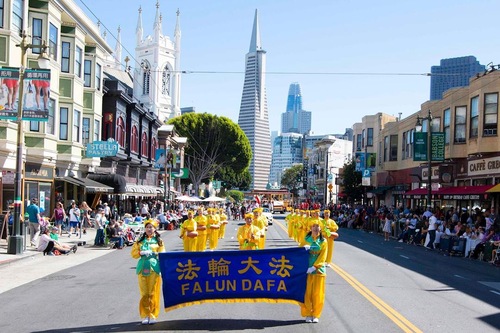 Applauding as the Falun Dafa entry passed by, Jay Tamacio said the practitioners’ performances were “coordinated and full of energy.” He also said the principles of Falun Gong represent hope for the future.

Rita Leroy, a middle school teacher, comes to the event every year. She praised practitioners for their music and their colorful costumes. She said the costumes were very professional and well designed. The float was also one of her favorites.

Pointing to the words “Truth, Compassion, Tolerance,” she said she liked them but had heard about the suppression of Falun Dafa in China, including the state-sanctioned killing of practitioners for their organs. “From [these practitioners], I've seen how people can remain positive when facing difficulties and challenges. The kindness they demonstrate is hope for this world.”

Some Chinese spectators were also impressed. A group of excited Chinese students stood close to the action and called the performances superb. One of them said he did not know much about Falun Dafa before and wanted to know how the persecution in China started.

A practitioner explained that Falun Dafa became very popular due to its benefits on health and well-being; however, the Communist Party in China decided to suppress the group because its principles of Truthfulness-Compassion-Forbearance contradicted the Party’s reliance on deception and violence. The student nodded, and so did those next to him. They took some pamphlets to learn more about Falun Dafa.

“Father and Son Arrested a Total of 15 Times and Imprisoned 18.5 Years For Their Faith”