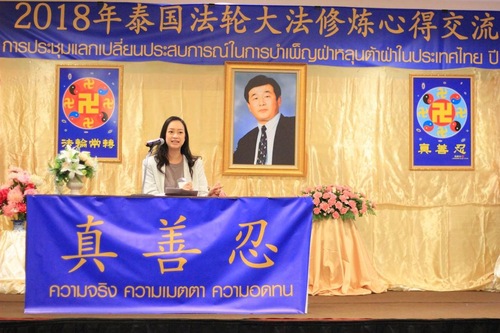 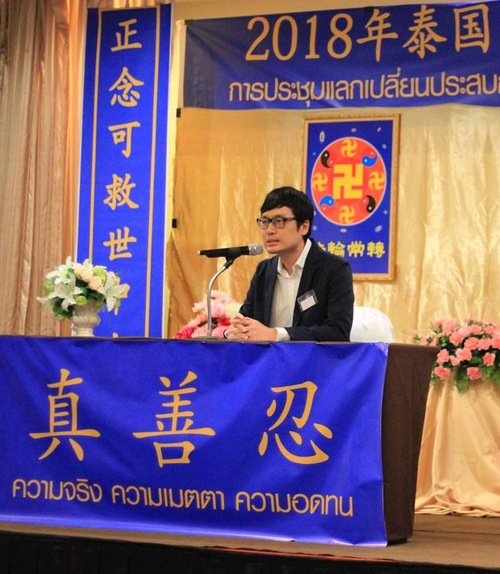 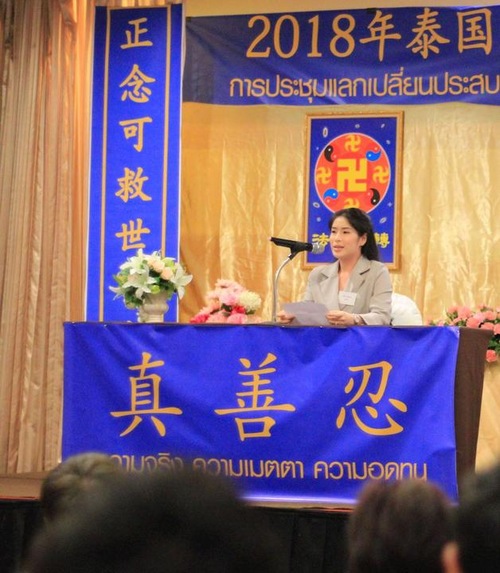 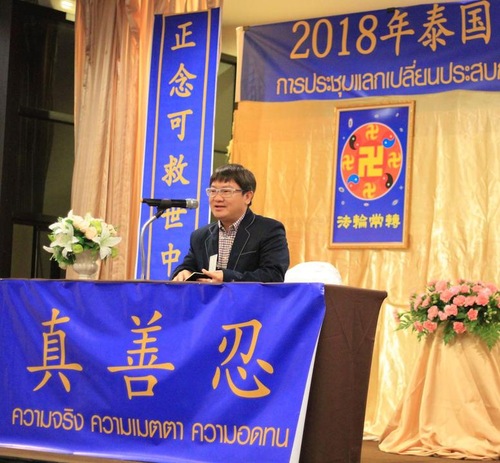 Several of the presenters were new practitioners.

Klayduen, 28, started practicing Falun Gong six months ago. She said that soon after she started doing the exercises, she felt very hot and perspired a great deal. Her feet were rooted to the ground firmly, like they were being magnetically attached to the ground.

After a week of practicing, she felt something warm in her lower abdomen. Some practitioners reassured her that what she was experiencing were all normal sensations. What happened later in the process, while she was reading Falun Gong books, was even more exciting to her. She said that no matter what questions she had, she would receive her answer by opening Zhuan Falun, the main book of Falun Gong.

“I wouldn't have believed in such miracles if I hadn't experienced them myself,” Klayduen said. She had once faced a huge issue mentally and could not resolve it. When she read the book, the answer appeared where her thumb was holding the page. There was a golden glow around her thumb. When she lifted her thumb, the golden glow disappeared. The glow reappeared once she touched the book with her thumb.

A practitioner named Panjit, who started practicing Falun Gong two years ago, said that she had not been interested in Falun Gong initially. She also didn't want her boyfriend to learn. But she became curious as to why her boyfriend, who had never believed in anything easily, was fascinated with reading Dafa books and doing the exercises every day.

Panjit eventually tried Falun Gong too. Like many people, she felt a strong energy when she started to practice. “I felt that energy was circulating around my body,” she said. “I had amazing feelings while doing each exercise. Every cell in my body was changing.” So she kept reading Dafa books and found the answers she had been seeking.

Panjit said that she had traveled to Japan to watch a Shen Yun performance not long ago. “I saw the program depicting divine beings signing their vows. In that moment, I felt as if I had entered the scene.

“Through my celestial eye, I saw that my true self had gone through countless centuries and lived in many countries. I saw how people's thoughts and notions were manipulated. I saw how foolish I was. I could not hold back my tears. I understood that I must abandon human thoughts and walk on a divine path to accomplish my mission.”

“German Unity Day: “Peace and Kindness Like This Are Important to All of Us””

“Six Family Members Arrested, Three of Them Sentenced to Prison”