(Minghui.org) On October 1, China’s National Day, in 2018, Falun Gong practitioners and supporters gathered for a rally and march to raise awareness about the persecution of Falun Gong, a mind and body practice that has been persecuted in China since 1999.

While calling for justice, rally participants also celebrated the 300 million brave Chinese men and women who quit the Chinese Communist Party (CCP) and its affiliates to take a stance against the regime's crimes. 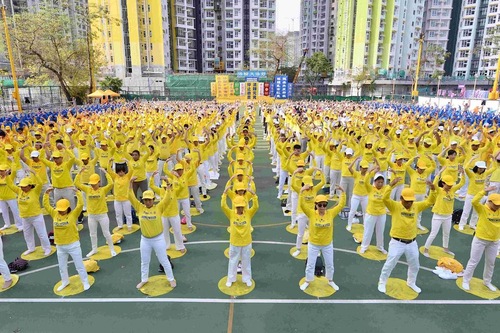 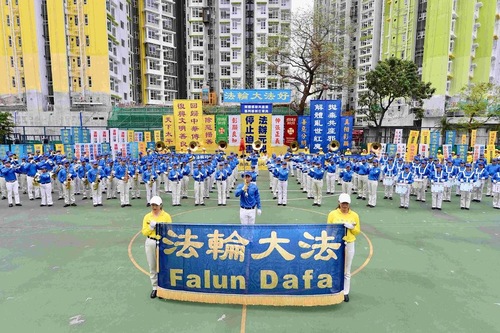 Falun Gong practitioners hold a rally to protest the 19-year-long persecution in China.

The morning before the rally, the practitioners exercised together at the park in Cheung Sha Wan Playground. Many political leaders later spoke at the rally to support Falun Gong practitioners’ efforts to stop the persecution.

Hong Kong Falun Dafa Association spokesman Mr. Kan Hung-Cheung said at the rally that for the past 19 years Falun Gong practitioners have never stopped raising awareness to the world's people. They never gave up their faith in the principles of Falun Gong, Truthfulness-Compassion-Forbearance, and continued to peacefully protest the persecution. All they wanted was for the CCP to stop the persecution and stop killing innocent practitioners for their organs (for transplant). Kan called on Chinese people in particular to side with the good and abandon the CCP by withdrawing all memberships to Party organizations.

Ms. Yi Rong, person-in-charge of the Global Service Center for Quitting the CCP, said, “On October 1, 1949, the CCP officially stole the political power and systematically destroyed the traditional Chinese culture and virtues. It persecuted and slaughtered its people, harvested organs from them to profit from illegal transplants. It completely lost the legitimacy of governance.” She called on people from all walks of life to support the movement of quitting the CCP. 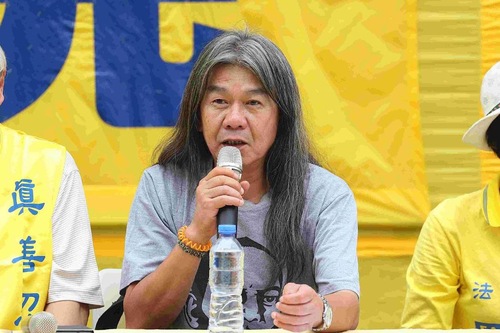 Former Hong Kong lawmaker Leung Kwok-hung spoke at the rally. He said that when the CCP launched the persecution of Falun Gong in 1999, it claimed that Falun Gong was the only group they suppressed. “Now it is clear that the CCP targets all groups of faith, as it demolishes churches and tears down crosses and incarcerates the Uyghurs,” said Leung, who urged the people to stand up for all persecuted groups. 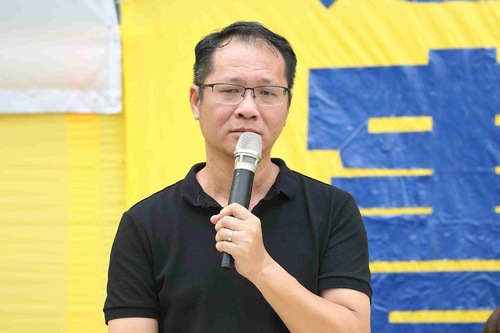 Richard Tsoi Yiu-Cheong, vice-chairman of the Hong Kong Alliance, at the rally.

Richard Tsoi Yiu-Cheong, vice-chairman of the Hong Kong Alliance, said that October 1st shouldn’t be celebrated as China's National Day. Instead, people should mourn for those who died under the CCP’s reign, he said. “Generation after generation, different groups of people suffered different kinds of persecution and it has only gotten worse,” he said. Tsoi urged the crowd to fight for real democracy and thanked Falun Gong practitioners for courageously upholding their beliefs in the face of violent persecution.

The Righteous Will Prevail 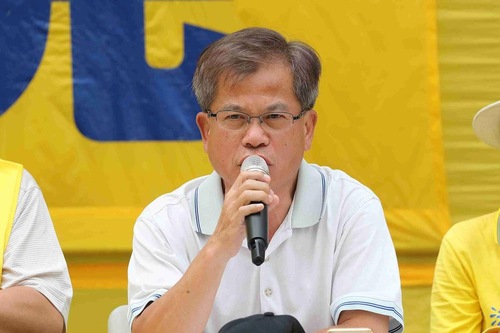 Fung Chi-wood, former Legislative Councilor, discouraged people from celebrating October 1 st and praised the rally for promoting the bright side of human nature. “(The Falun Gong practitioners) fend off the evil (CCP) with their lives and spirits. They have no fear of the evil… They protect the country and safeguard our human rights… The righteous will always prevail!” 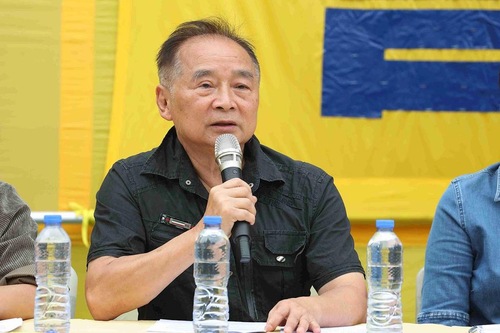 Former member of district council Chui Pak-tai praised the practitioners for standing up to the CCP’s violence with peaceful and rational methods. He described the practitioners as having the spirit of benevolence, “There is an old saying in China: ‘a benevolent person is invincible.’ The evil will eventually be destroyed.”

Many Hong Kong legislators recorded their messages to show their support for the rally and the practitioners. Wu Chi-wai, chairman of Democratic Party and a member of the Legislative Council, paid tribute to the practitioners’ 19-year-long efforts to end the persecution. He also acknowledged the positive effect of the trend of quitting the CCP, “It is reflective of how (300 million people) have seen through the CCP’s lies and propaganda.”

Legislator Ted Hui Chi-fung asked everyone to stand up against the CCP’s persecution. He was horrified by the communist regime's involvement in harvesting organs from living practitioners incarcerated for refusing to renounce their belief. “It’s absolutely immoral and against humanity. A regime that tramples upon human rights and violates universal values shall be detested by its people,” he said.

Legislator Leung Yiu Chung stressed that the CCP did everything possible “to suppress the dissidents.” He said that currently there were still many imprisoned and tortured and had their organs removed. He encouraged more people to quit the CCP to “weaken its power.”

March to Spread the Message about the Persecution 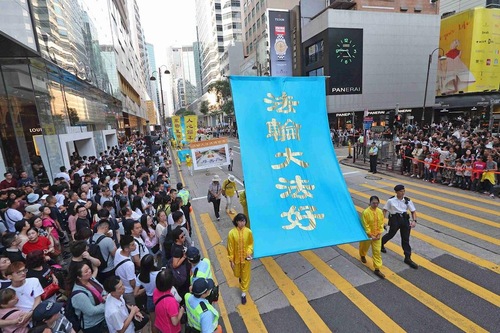 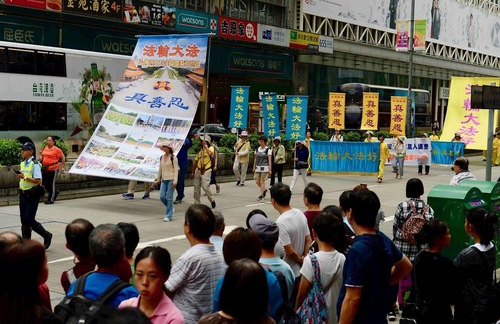 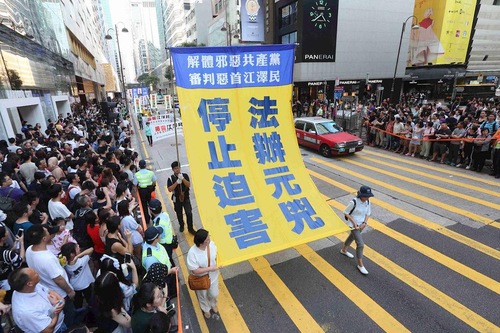 “Stop the Persecution. Bring the Perpetrators to Justice” 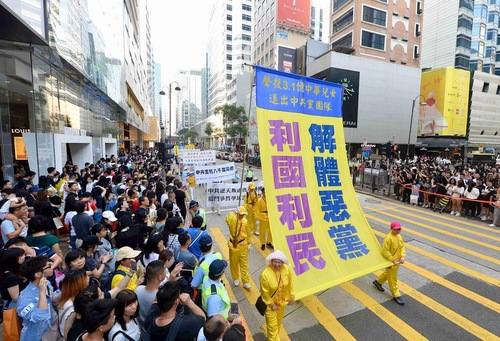 The Falun Gong march supports the 300 million Chinese men and women who quit the CCP and its affiliates. 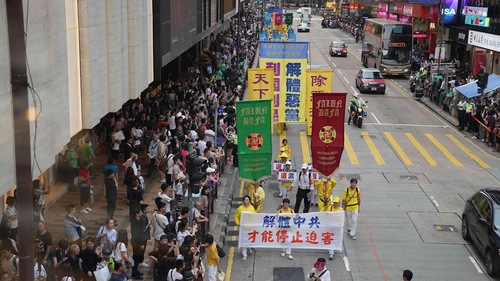 The march draws the attention of many spectators. 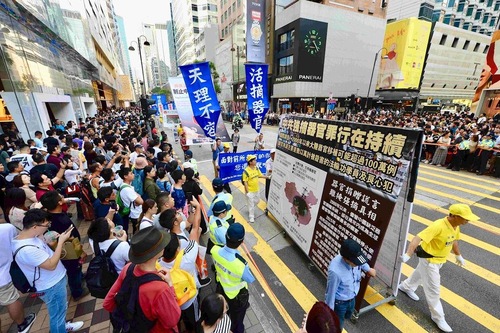 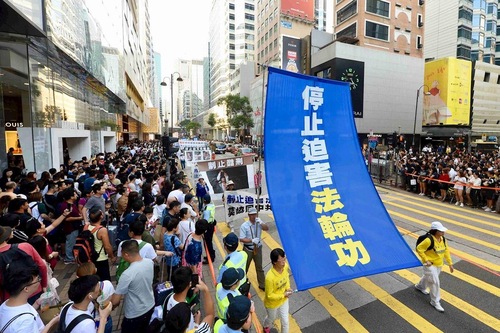 “Stop the Persecution of Falun Gong in China.” 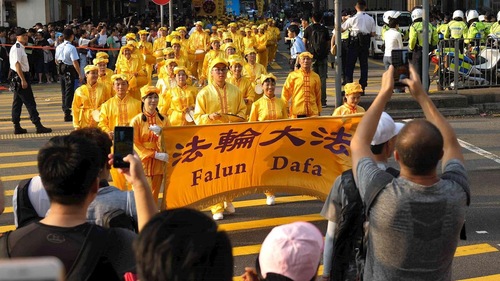 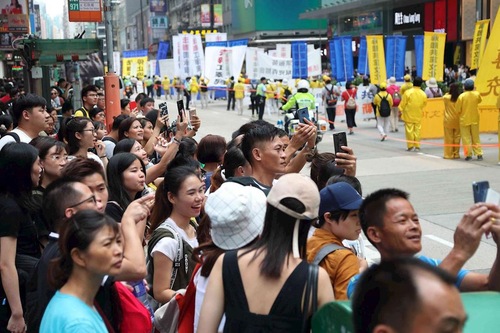 Spectators welcome and videotape the parade. 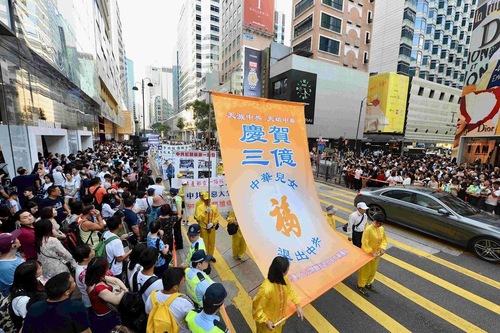 Supporting the 300 Chinese people who quit the CCP. 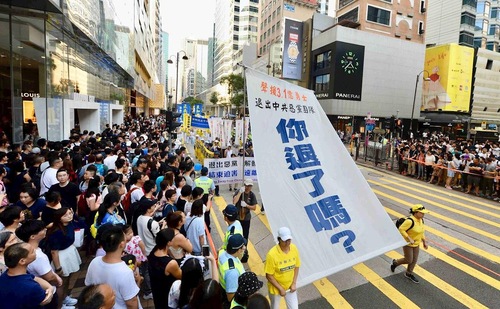 Banner urges the Chinese people to quit the CCP. 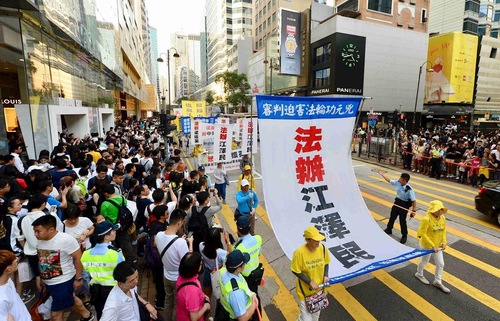 Calling for the perpetrator of the persecution, former Chinese leader Jiang Zemin, to be brought to justice. 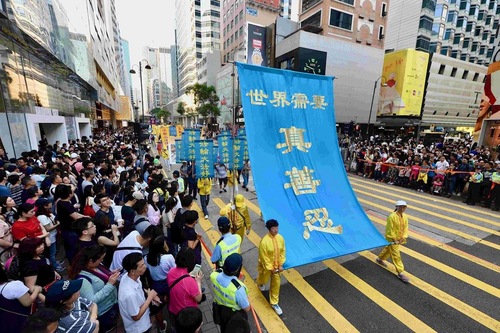 The march of nearly 1000 practitioners and supporters set off after the rally, led by the by the Tian Guo Marching Band. The Waist Drum Team and the Flag Team drew the attention of many spectators as well. During the march and rally, many Chinese people showed support by withdrawing their memberships in the CCP and its affiliates.