(Minghui.org) With mild weather and less rainfall, October is one of the best times to visit Taipei, especially for tourists from mainland China. “If anyone wants to stay around and quit the communist party organizations, please talk with Falun Gong practitioners and ask them for help,” said one of the tour guides as he led a large tour group in front of the Sun Yat-sen Memorial Hall.

Many of these tourists came to watch the changing of the guards ceremony. Influenced by defamatory propaganda back in mainland China, they were hesitant to interact with Falun Gong practitioners in the beginning. Seeing the tour guide greeting practitioners, some of the tourists began to talk with them.

One tour guide said that she was touched by their perseverance, because she saw practitioners all the time, rain or shine. “I often told those tourists to take materials from you, because you have 'can't miss' information. It's free. Why not take one and read it?” she explained.

A younger tour guide agreed, “I usually recommend the tourists to read it and reach conclusions on their own, instead of blindly following the communist party.” 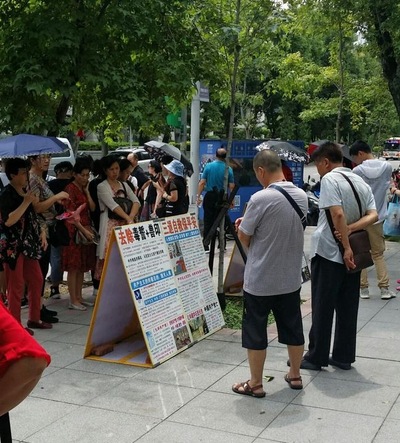 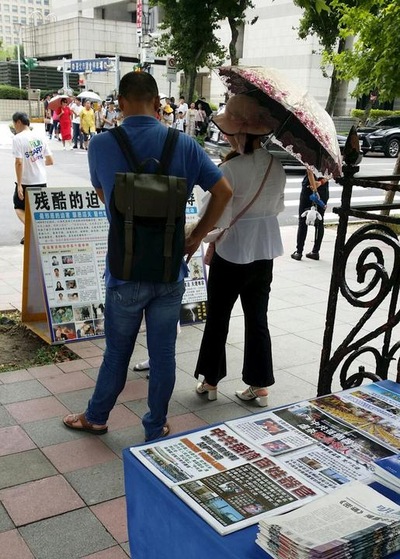 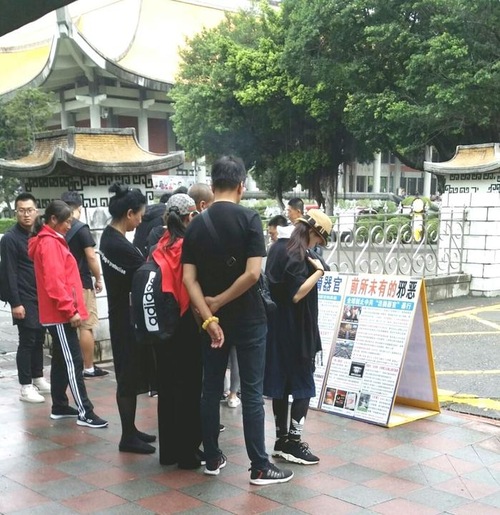 “I Truly Respect What You Believe In”

An older man from Henan Province came to the booth and asked for materials from a practitioner, “During this trip, I want to read something that the Party does not tell us. Do you have it?” The practitioner talked with him and provided a copy of Nine Commentaries on the Communist Party. Upon hearing how severely practitioners were mistreated for their belief, the man decided to sever ties with the communist party regime.

About two hours later, the man returned to the booth and talked with the practitioner for a long time. “The more I think about it, the more I realize that the Party has disrupted morality in China. It is rotten to the core and beyond belief,” he remarked.

One time, he was assigned with someone else to watch a coworker, a Falun Gong practitioner. “I talked with the coworker in private for a while. She told me about how her health improved and how she became a better person following the principles of Truthfulness-Compassion-Forbearance. It was amazing and I have to say that I truly respect what you believe in,” he continued.

Another man said that he was from northern China, and many neighbors practiced Falun Gong before it was persecuted in July 1999. He could not understand why the communist party would ban a peaceful group like this and agreed to renounce his memberships in the Party organizations.

Watching the practitioners' group exercises, three middle-aged men from Fujian Province said that they admired the practitioners' perseverance. One practitioner talked with them and explained what Falun Gong is. One of the men nodded, “The communist party only cares about its own power. It would suppress anything that it considers a threat. There is no freedom of belief or freedom of thought in China.” One of them said that he was willing to quit the Party organizations.

A bus driver said that he had observed Falun Gong practitioners and understood what they were doing. “The communist party wants to control people's minds,” he said, “So I often tell tourists from mainland China that during their stay in Taiwan, it would be good to spend some time to appreciate the freedom of belief here, and the practice of Falun Gong.”

“Podcast (Cultivation): “Letting Go of the Reins: Cooperating and Quietly Assisting Others””