(Minghui.org) An engineer in Hefei City was sentenced to four years in prison for refusing to renounce Falun Gong. The local appeals court ruled to uphold his original sentence without holding a hearing. His family filed a motion to reconsider the case, but the procuratorate declined to hear the case.

Mr. Ji Guangjui, 62, is now serving time at Suzhou Prison. This is not the first time that he has been targeted for practicing Falun Gong. He credits the mind-body practice for curing his stomach problems. His pursuit of health, though, landed him in police custody multiple times after the Chinese communist regime launched the persecution against Falun Gong in July 1999.

Mr. Ji was most recently arrested on March 28, 2017. Police descended upon his home at around 10 p.m. and spent the next two hours ransacking the place without showing any ID or warrant. Around midnight he was taken to Chaohu City Police Department, where he was severely tortured during interrogation. He had bamboo sticks pushed into fingers, was struck on the head and the chest, and was also put in a choke hold. 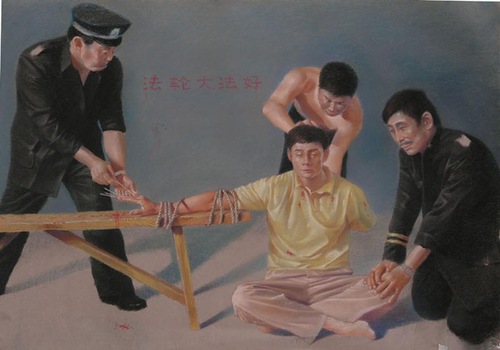 The interrogation went from around 2:30 a.m. to 6:00 p.m. the following day. The police altered some of the interrogation records and later sent Ms. Ji to Chaohu Detention Center.

Mr. Ji and his attorney refuted the allegations against him during his trial on December 6, 2017. One document signed by Mr. Ji originally stated that a bit over 100 Falun Gong pamphlets were found in his home, but the number was later changed to 1,300.

The presiding judge stopped Mr. Ji's testimony in his own defense multiple times.

Chaohu Court sentenced Mr. Ji to four years of imprisonment on May 24, 2018, with a fine of 50,000 yuan. Hu Honglin, a judge from Hefei Intermediate Court, refused to hold a hearing in Mr. Ji's appeal case. When Mr. Ji's attorney questioned why Hu didn't follow the law to hold a requested hearing, Hu barred the attorney from representing Mr. Ji.

Mr. Ji's family received the higher court's ruling on September 20. The ruling was signed by Hu and dated September 14. Mr. Ji's son didn't submit his affidavit of support to Hu until September 13, so the young man suspected that Hu issued his decision to uphold the original sentence without reviewing his statement.

The son received a call from the detention center on September 27, when he was on his way to submit a motion to reconsider his father's case. He was told that his father had been sent to Suzhou Prison. He questioned why he and his family weren't notified earlier and given a chance to see his father, and the detention center said that family visits weren't necessary.

Mr. Ji's family was notified on October 8 that Hefei City Procuratorate refused to consider their motion.

Anhui Man On Trial for His Faith, Testifies Against Police

“Helping People Quit the Communist Party Through My Work”

“Power of Dafa: My Family Benefits from Falun Gong”