(Minghui.org) Today's news from China includes incidents of persecution that took place in 8 cities or counties in 6 provinces. According to this report, 7 Falun Gong practitioners were subjected to mistreatment during their detention, and at least 6 were illegally arrested. 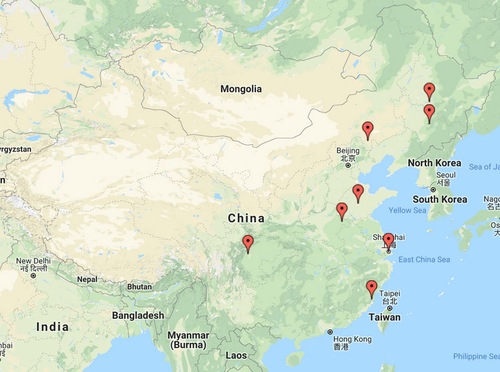 Ms. Luo Guiru was sentenced to seven years in prison in the Pengzhou City Court on September 7, 2018.

Mr. Sun Zhuanjian was sentenced to two years and taken to Xinmi Prison in Zhengzhou City on August 30, 2019.

Officer Mao Xuhuo and three others from the Longhua Police Station in the Longtan District deceived Ms. Zhang Wenjun into opening her door on September 2, 2018. They were carrying guns and electric batons. They ransacked Ms. Zhang's home and confiscated her Falun Gong books and other personal belongings.

Ms. Zhang was arrested and taken to the Baishan Detention Center. She has since been released.

Ms. Zhang Chunyu was sentenced to five years and taken to the Heilongjiang Province Women's Prison. She was harassed and beaten by inmates for refusing to renounce her belief.

Ms. Zhang's family went to the prison on September 6, 2018, but were not allowed to see her.

5. [Fuzhou City, Fujian Province] Mr. Zhang Jing Sentenced to Five and a Half Years in Prison

Mr. Jia Bin and his wife Ms. Zhao Chunxia from Bairin Zuoqin were arrested on April 21, 2017. Ms. Zhou was sentenced to three years and taken to the Fifth Ward of Inner Mongolia Women's Prison on April 11, 2018.

Ms. Zhao's sister went to the prison on September 14, 2018, but she was not allowed to visit Ms. Zhao because Ms. Zhao refused to renounce her faith.

Ms. Tian Weimei and Ms. Di Yanlan, both in their 70s, were arrested on the morning of September 14, 2018, for talking to people about the persecution of Falun Gong in Qinjiawa. They were taken to the Chengdong Police Station, Jinan Railroad Police Department.

The officers ransacked their homes and confiscated their computers, printer, Falun Gong books, cell phones, and other personal belongings.

Ms. Tian and Ms. Di's children went to the police station to appeal for their release. Officers released them after midnight but detained Ms. Tian's son Mr. Yi Feng.

Mr. Yi was taken to the Jinan Railroad Police Detention Center on the morning of September 15, 2018.

8. [Shanghai] Additional News on the Arrest of Six Practitioners

Ms. Cheng Ying, Ms. Xu Shizhen, Ms. Ke Yu’e, Ms. Zhang Jianfang, and an elderly couple were arrested at Ms. Cheng's home in Gu Village, Baoshan, on September 10, 2018. The place was ransacked, and her cell phone, computer, and other personal belongings were confiscated.

The elderly couple was released on bail, but the other four practitioners were taken to a detention center.