(Minghui.org) Today's news from China includes incidents of persecution that took place in 9 cities or counties in 6 provinces. According to this report, 4 Falun Gong practitioners were subjected to mistreatment during their detention, and at least 13 were illegally arrested. 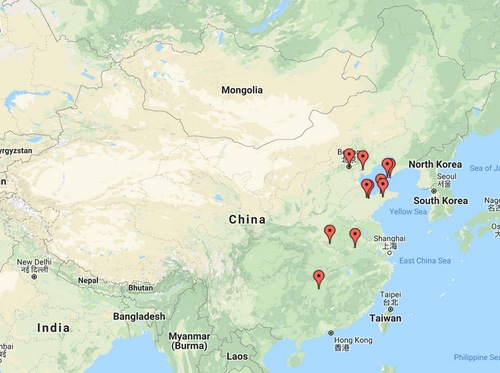 Ms. Cui Hua from Tianliu Town was arrested by Tianliu Police Station officers on the morning of September 24, 2018, for talking to people about the persecution of Falun Gong.

Ms. Cui is being held in the Weifang Detention Center. Her family is not allowed to visit her.

Mr. Wu Shaoxia from Xiaowujia Village, Qishan Town was arrested by Xiadian Town Police Station officers in mid-September, 2018. Her home was ransacked, and her whereabouts are unknown.

Ms. Wang Cuihua, from Dabojia Village in Qishan, and another practitioner were arrested at home by Xiadian Police Station officers. Their homes were ransacked. They have since been released.

Ms. Liu Cuiying from Wangjiakuang Village in Lugezhuang Town was arrested on September 26, 2018. She was taken to the Laiyang Detention Center.

Ms. Chen Zhonglian from Xiaohetun Village, Yanqing Town was sentenced to three-and-a-half-years in prison by the Yanqing Court. She appealed, but her appeal was refused.

Mr. Ji Guangkui was sentenced to four years in prison and fined 50,000 yuan by the Hefei City Intermediate Court on September 14, 2018.

Ms. Zhang Guimin was taken to the Liaoning Women's Prison on August 28, 2018.

Mr. Wang Yongsheng, Ms. Chen Lirong, and Ms. Chen Guirong, all from Wafangdian City, were arrested when they were distributing Falun Gong informational materials on July 29, 2018. The Wafangdian Police Department has since issued arrest warrants.

Ms. Zhang Yueqin is incarcerated in the No. 17 Ward of Hebei Province Women's Prison. Her health condition is worrisome.

Mr. Zeng is being held in the Guangshan Detention Center.

Ms. Cao Haoxiang from the Weifang Science and Technology College was arrested at home on the afternoon of September 26, 2018.