Australia Day Parade in Adelaide: “Our Society Needs These Principles”

(Minghui.org) At the recent Australia Day Parade in Adelaide on January 26, the lotus-themed float by Falun Dafa practitioners once again became a highlight.

Over 150 groups attended the event, which attracted nearly 40,000 spectators. Despite the summer heat of about 87°F (31°C), visitors were excited to see the practitioners’ demonstration of Falun Dafa exercises and the float decorated with lotus and plum flowers. 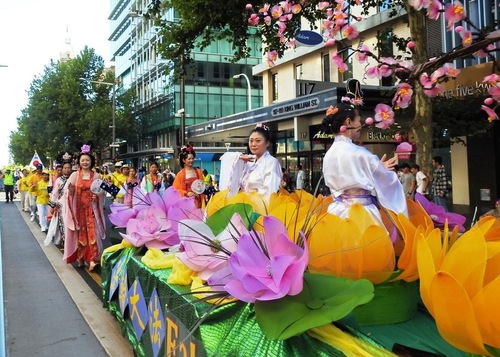 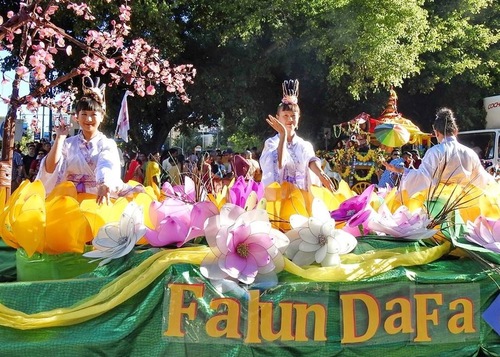 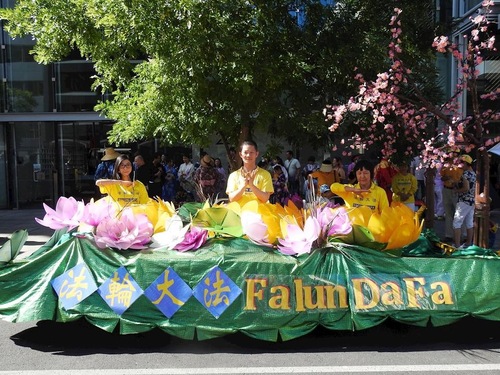 Practitioners demonstrate the Falun Dafa exercises on the float decorated with lotus and plum flowers. 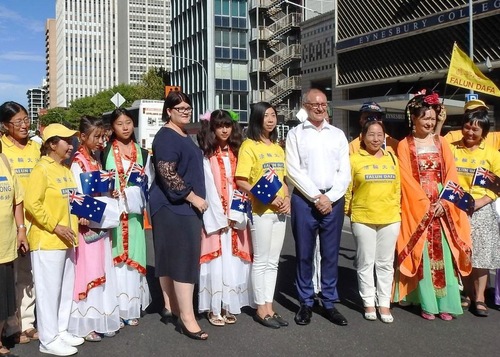 Jay Weatherill (Premier of South Australia) and his staff pose for a photo with practitioners.

Adelaide mayor Martin Haese greeted practitioners as they reached the end of the parade route at Elder Park. An event host introduced Falun Dafa as a spiritual practice based on the principles of Truthfulness-Compassion-Forbearance and explained that the lotus flowers symbolize purity and uplifting of the spirit.

Ali among the crowd was impressed by the performance and said he could feel peace, compassion, and happiness. Local resident Tony was curious about the “Falun Dafa” banner. When practitioners explained that Falun Dafa teaches the principles of Truthfulness-Compassion-Forbearance, he agreed and said, “Our society needs these principles.”

Mr. Xie and his family of five watched the parade. He liked the practitioners’ performance because it reflected traditional Chinese culture. His family took many pictures and said they especially enjoyed the costumes.

Mr. and Mrs. Gu from Shanxi Province in China said they were impressed by the float and the different designs practitioners put on each year. They had previously renounced their memberships in the Chinese Communist Party after learning of its persecution of Falun Dafa.

Katharine, a young practitioner who participated in the event, said she was very happy to be there. “I used to come with my parents, and my entire family has benefited from Falun Dafa,” she added, “I hope more people can be blessed by the principles of Truthfulness-Compassion-Forbearance like we were.”