(Minghui.org) The biannual Splash 2.0 event at Boston University showcases more than 400 student clubs and organizations and was held at George Sherman Union on January 20, 2018. 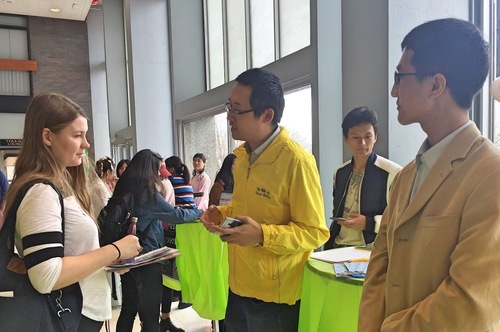 The Falun Dafa club at the university set up their table early in the morning and offered flyers and information materials in both English and Chinese, as well as hand-made paper lotus flowers.

Many students stopped by to inquire about the spiritual and meditation practice. Some registered for the free weekly Falun Dafa instruction session.

A student from China was surprised to see the club, as Falun Dafa is heavily persecuted by the communist regime in his home country. He walked around a few times but did not come closer. When a Dafa practitioner later handed him a flyer, he accepted it and happily placed it in his bag.

Another student came to the table and asked about the self-immolation incident on Tiananmen Square in Beijing. A practitioner explained to him that the event was staged by the communist authorities to instigate hatred after Jiang Zemin, head of the Communist Party at the time, started his campaign against Falun Dafa. “Practitioners live by Truthfulness-Compassion-Forbearance to become better people. Falun Dafa was taught to the public in 1992 and soon became popular all over China because it improved people’s health and morality.”

Another student signed up for the club after learning about the practice from practitioners. He took flyers and inquired about time and place of the instruction session.

“Witnessing the True Power of Dafa”

“A Once-Struggling Student Goes to College”