(Minghui.org) A Maoming City resident was sentenced to 2 years in prison and fined 3,000 yuan after two court appearances.

Ms. Cao Junyi, 56, was arrested on July 6, 2017 after being reported for tearing down a poster defaming Falun Gong, a mind-body practice being persecuted by the Chinese communist regime. 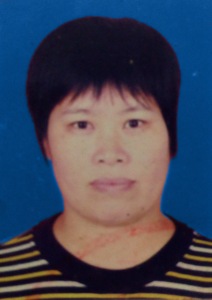 Ms. Cao first appeared in court on January 11, 2018. Her sentencing hearing was held five days later, and judge Jiang Guowei convicted her in less than 20 minutes. Ms. Cao hired a new lawyer and is appealing her case.

The first hearing of Ms. Cao was held in a room in the Maoming First Detention Center, where she remains. There were 20 seats in the makeshift courtroom, but only her husband, their two sons, and her cousin were allowed to attend the trial.

The road in front of the detention center was blocked, with more than four dozen plainclothes officers pacing around. Ms. Cao’s family saw about ten heavily armed police officers standing directly outside the room where the hearing was held.

Ms. Cao’s two lawyers refuted the prosecution evidence. They pointed out that no law in China criminalizes Falun Gong and that their client should never have been arrested for exercising her constitutional right to freedom of belief. Therefore, her forced-labor term in the past was a violation of her legal rights. There was also nothing wrong with her owning and sharing Falun Gong books. As for the poster, Ms. Cao had every right to address false propaganda against Falun Gong.

Determined to Fight for Justice after Sentencing Hearing

The second hearing was also held in the detention center. Ms. Cao's family members were again present to support her.

Judge Jiang announced a guilty verdict against Ms. Cao in less than 20 minutes. She soon hired a new lawyer to help appeal her case. When the lawyer met with Ms. Cao on January 19, 2018, she expressed her determination to fight for justice.