(Minghui.org) Practitioners of Falun Dafa have learned the principles of Truthfulness-Compassion-Forbearance, applied them in their everyday lives, and experienced significant health and spiritual benefits. Yuru, who started practicing Falun Dafa thirteen years ago, shares her own and her family's cultivation experiences, and how she learned a righteous way of doing business from the Falun Dafa principles, which saved her from dangerous situations several times. 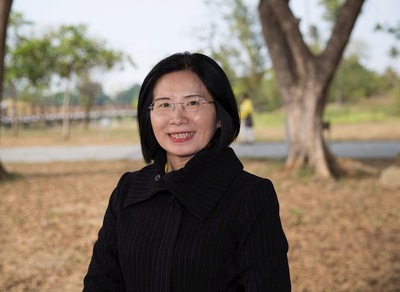 Yuru owns an advertising company in Kaohsiung, Taiwan. She and her husband Hongming heard about the benefits of Falun Dafa from Professor Yang of National Sun Yat-sen University in 2005. She had seen people doing the exercises near her home, but she couldn’t find the time to learn herself. Hongming said, “It's such a great practice. Why don't we take the opportunity to learn it?” They found a copy of the book Zhuan Falun, attended a nine-day lecture series, and started doing exercises at a group exercise site.

Even though Yuru had never meditated before, she was able to sit with both legs crossed for an hour the first time she learned the Falun Dafa meditation exercise. She has since done the five exercises and studied a lecture from Zhuan Falun with her group every morning before she goes to work, rain or shine.

Yuru's father said one day in admiration, “I wonder what's so powerful that made my daughter get up early in the morning for exercises every day!” Out of curiosity, he attended a nine-day lecture series and also started cultivating Falun Dafa, as did Yuru's three children.

Soon after Yuru started practicing Falun Dafa, she experienced body cleansing. She had diarrhea for several days, but remained energetic, and was able to go to work without any problem. She felt lighter than usual, as if dirty things had been purged out of her body. She said, “I used to have menstrual pain every month and had to take medicine for it. Ever since the body cleansing, my menstrual pain has completely disappeared.” She has great energy despite her busy daily work.

The health of her parents and three children improved as well. Her entire family has benefited from practicing Falun Dafa. Yuru said, “My kids used to catch cold easily in kindergarten. As soon as one kid in their classes got a cold, they always got their turn and had to visit doctors several times before they got better. Ever since they started practicing Falun Dafa, their immune systems have greatly improved. They rarely get sick at all.”

“I used to cultivate myself in different schools, but I found it hard to do well whenever I ran into any tests in my life. After I began practicing Falun Dafa however, the principles of the practice miraculously remind me when I encounter tests.” Yuru works to raise her xinxing and follow the principles of Truthfulness-Compassion-Forbearance, which makes her more sure of herself.

Yuru said, “There are many tests regarding personal interests when dealing with manufacturers, customers, and co-workers. A customer once ordered wedding invitations written in a particular font. Some Chinese words look a little different in different fonts. The customer had proofread the invitation in person and finalized it, but he found some words unsatisfactory after all the invitations had been printed out, and wanted a reprint. The printouts cost thousands of dollars.”

The dispute couldn't be resolved at first. Yuru pondered upon it. “I picked up the book Zhuan Falun and thought that I should measure myself against the high criteria for Falun Dafa practitioners. Light seemed to pour into my heart. I felt as if being relieved.” Yuru called the customer and agreed to provide the reprint for free. The customer felt bad about it and brought her two boxes of grapes when he picked up the invitations. They eventually became friends.

Yuru learned a lot from this experience. “Cultivation is about looking within unconditionally and putting others before myself. As soon as my mindset changes, I can improve, let go of my attachment to personal interests, and the problem is solved.”

She recounted another, much more serious test. A manufacturer in Taipei once marketed a kind of wedding candy package box. A brand name was printed on the box. The sales representative told Yuru that they had paid for the patent, and asked her if she would like to become a dealer for the package boxes. Yuru agreed and started selling the boxes on her online store. To her surprise, the police came to her store, arrested her, and confiscated all the boxes. That day happened to be her birthday. It turned out that the boxes were counterfeit, and the manufacturer had paid only for the patent on the box shape, but not the brand.

Copyright violations are a serious crime, so Yuru hired an attorney to defend herself. The lawsuit lasted longer than a year. Yuru honestly answered all the questions posed by the court. She said, “I did my best to stabilize my work and life. The final court decision was a reconciliation with probation. I feel fortunate that I had started my cultivation. I understood it was caused by my karma, but I maintained a positive attitude. I wouldn't have been able to pass this test if I hadn't cultivated Falun Dafa. I looked inward and found my attachment to reputation and my failure to check details.”

Yuru hired two managers for her branch stores. The two managers personally benefitted from the store’s customers and used work time and materials to make money for themselves. They secretly planned to open their own stores. Another employee thought this was very unfair to Yuru and finally told her what the managers were doing.

Yuru was shocked by the news and felt betrayed and hurt. She first thought about setting up some cameras, collecting evidence, and suing these two people, but a second thought came to her mind right away, “I'm a Falun Dafa practitioner. I should follow higher standards.” When she considered the issue from the perspective of a cultivator, she felt her own capacity become enlarged, and her heart filled with compassion.

Yuru held a managers meeting, thanked the managers for their work and contributions, and told them if they would like to open their own store, she would be glad to share her resources with them. The two managers were moved to tears. They apologized for their wrongdoings, and said that they hadn't meant to sabotage Yuru's business, but did it under the pressure to make a living.

Yuru said with gratitude, “As long as I read Zhuan Falun, I can find answers to many questions in my life. I gain more understanding every time I read the book. I can't let go this key to life. Dafa has broadened my view of life, directed my business in righteous ways, and helped me avoid going astray and dangerous events. It's all because I followed Truthfulness-Compassion-Forbearance and chose to walk a righteous path.”

“I Avoided Family Fights When I Remembered That I'm a Practitioner”