(Minghui.org) Today's news from China includes incidents of persecution that took place in 8 cities or counties in 5 provinces. According to this report, 4 Falun Gong practitioners were subjected to mistreatment during their detention, and at least 11 were illegally arrested. 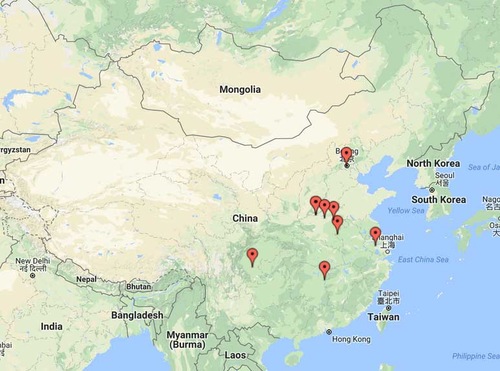 Ms. Cong was harassed, subpoenaed, arrested, and released on bail many times by the Huairou Police Department and the Chengguan Town Police Station. She has been displaced several times.

Ms. Rao Qiaofang was reported for distributing Falun Gong materials on the morning of November 21, 2017. She was arrested and taken to the local police station, where she was questioned about the source of the materials. Her home was ransacked and videotaped. She was detained for five days in the Liuyang City Detention Center.

The officers ransacked their homes. From Ms. Ning's home they confiscated two computers, three printers, over 10,000 yuan in cash, supplies, and Falun Gong books and materials. They confiscated a few materials from Ms. Wu's home. Both practitioners were taken to the Neijiang City Detention Center. They were tried on August 18, 2017.

Ms. Yu Kebin was arrested by officers from the Yuzhai Police Station on December 10, 2017, for filing a criminal complaint against former Chinese head Jiang Zemin in June 2015. She was held in the Linquan County Detention Center for 10 days.

Ms. Wang Zanmei, 70, is disabled. She was arrested by officers from the Wucaomen Police Station in the Longting District of Kaifeng City at noon on November 30, 2017, for distributing Falun Gong materials. She is being held in the Kaifeng City Detention Center.

Ms. Zuo Hongqin was arrested at her rented home by officers from the Qi County Domestic Security Division on December 2, 2017. The officers ransacked her place and confiscated a printer, a notebook computer, and 7,200 yuan in cash. She is being held in the Kaifeng City Detention Center.

Ms. Zhu Xiuzhen's homes in Qi County and in Kaifeng City were ransacked on the afternoon of December 2, 2017. The police confiscated two printers, one DVD burner, paper, and blank video discs. Her non-practitioner son's computer was also confiscated.

Ms. Xu Xieyi from Zhengzhou City and Mr. Zhao Liuzhu, Ms. Li Qiaoling, and Ms. Zhao Shuqin from Xinzheng City were arrested by officers from the Xinjianlu Police Station, Xinzheng City, on the evening of December 15, 2017.

Mr. Zhai Jiaxiang was given a four-year prison term. He is being held in the Xinmi City Prison, Zhengzhou City.

“All It Takes: Believing in Master and Dafa to Oppose the Persecution”