Raising Awareness of the Persecution at Peace Festival in Belgium

(Minghui.org) Falun Gong practitioners participated in the annual Peace Festival (Vredefeesten) sponsored by the city government of Sint-Niklaas, Belgium, on September 2 and 3.

The festival has been held on the first weekend of September since 1948, to commemorate the end of World War II. Over the years, this annual event has developed into one of the world's most popular festivals while maintaining the founding theme of peace and freedom.

This year, there was a special activity for children at Heymanplein Plaza, called “We Are All on the Road Against Injustice.” The idea was for children to visit different booths to learn about human rights issues around the world, including the plight of refugees. Each booth presented content appropriate to a child's level of understanding, and when the children answered three questions correctly about a specific issue, they would receive a small reward and get a special card stamped.

At the Falun Gong booth, practitioners displayed two artworks painted by practitioners. The paintings depicted children who had been touched by the persecution of Falun Gong in China, a brutal suppression that has claimed thousands of lives and torn countless families apart since 1999. The three questions for children to ponder were: What do the guiding principles of Falun Gong –Truthfulness, Compassion, and Forbearance – mean? Why did the little girl in the painting become an orphan? And how long has Falun Gong been persecuted in China? 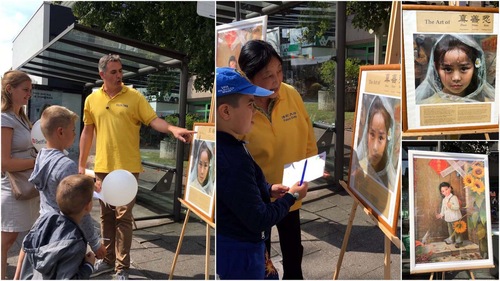 Discussing the persecution of Falun Gong in China with children at the Sint-Niklaas Peace Festival. 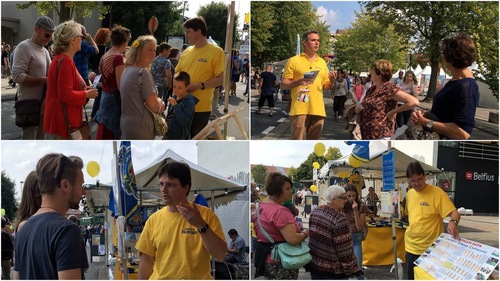 Practitioners talked about the ancient Chinese cultivation practice of Falun Gong and discussed the paintings. They explained that the children in the paintings had lost their parents because their parents bravely upheld their faith, even in the face of persecution by the Chinese Communist Party.

Children and parents who stopped at the booth listened carefully. Each child was given a beautiful hand-made paper lotus flower made by practitioners, which, in Chinese culture, is a symbol of purity in adversity.

A boy stopped at the booth with his dad and asked what he needed to learn to receive the award. A practitioner pointed to one of the paintings and asked the youngster what he saw.

“What do you see about her?”

“Tears on her face.”

“Do you know why she is crying? Because she just became an orphan.”

“What is an orphan?”

“Orphans are kids who lost their parents. What is she wearing around her neck?”

“That's right. It's the key to her house. You see, the door is locked. She has the key, but she cannot get in, because the bad guys sealed her house. She has become homeless.”

The practitioner then told father and son more about the 18-year persecution of Falun Gong in China, as well as practitioners' peaceful worldwide resistance.

Many visitors expressed concern about the brutal nature of the persecution. They took photos of the display boards and of Falun Gong practitioners demonstrating the exercises. Many people also signed a petition condemning the state-sanctioned organ harvesting of prisoners of conscience in China, the majority of whom are Falun Gong practitioners.

In addition to raising awareness of the persecution in China, practitioners also provided general information about this traditional mind-body cultivation practice. A number of visitors were interested in learning Falun Gong and asked for details about workshops, websites, and exercises sites.

“Podcast (Cultivation): “Dafa Brings Many Blessings to an Illiterate and Bad Tempered Woman””