(Minghui.org) Mr. Hu Guojian remained in a coma after brain surgery in May 2016. After eight months in the hospital, despite his vegetative state, he was discharged and taken back to the prison to finish his term. The prison has hired medical personnel to look after him. 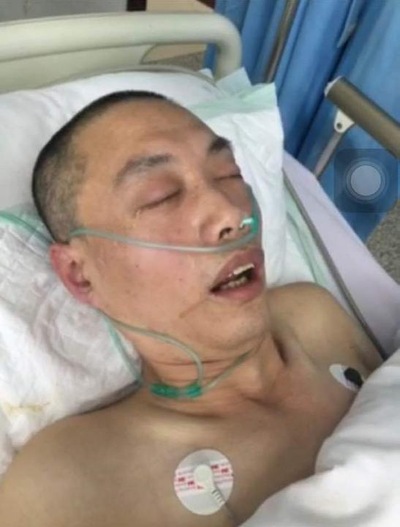 Mr. Hu Guojian was rushed from prison to the hospital after he suddenly fell into a coma.

Mr. Hu was rushed to the hospital after he suddenly lost consciousness on May 26, 2016, in Benxi Prison. The doctors discovered that he had suffered a severe brain hemorrhage and operated on him. He never regained consciousness after the surgery.

Mr. Hu was serving a four-year prison term after being arrested in 2015 for distributing informational materials to expose the persecution of his faith, Falun Gong.

The four-year sentence came only five years after spending ten years in prison, from 2000 to 2010, for practicing Falun Gong. From being tortured while he was in prison the first time, he suffered from severe brain damage, including cerebral atrophy and multiple strokes.

According to his wife, his family were devastated to see him when he was released in 2010. He had trouble walking and talking. He could barely take care of himself. He seemed to suffer from dementia and often fainted.

“Distraught over the persecution that he was subjected to, his mother had a stroke and became bedridden,” said Mr. Hu's wife.

At home, Mr. Hu resumed his practice of Falun Gong and his health recovered significantly. After a few years, he began to look for jobs to support his family.

At the same time, feeling grateful for the practice and undaunted by the persecution, he went out to distribute informational materials to expose the persecution of Falun Gong.

But he was arrested again on July 7, 2015, and sentenced to another four years in prison.

When his wife visited him at Benxi Prison on May 23, 2016, he had lost more than one third of his body weight. Originally almost 200 pounds, he weighed less than 110 at that point. He had symptoms of a stroke and had difficulty walking again.

Mr. Hu told his wife that, during his 11 months detention at Nangou Detention Center in Fushun, Liaoning Province, the inmates tortured him. They didn't let him eat or sleep and choked him.

“While describing the torture to me, he became very emotional and burst into tears. He just couldn't continue,” recounted Mr. Hu's wife.

While Mr. Hu was in the detention center, his family went to the police station, detention center, the procuratorate, and the court to seek medical parole on his behalf since he was still recovering from the brain damage. But none of the agencies was willing to help.

The persecution of Mr. Hu was a disaster for his family. He had spent a total of 12 years in prison since the persecution of Falun Gong began in 1999. His wife had to take on huge responsibilities to take care of the family and raise their child.

“Our son was only three years old when my husband was sentenced to ten years in prison in 2000, and he was terrified. He cried so badly that his vocal cords were severely damaged. After he went to elementary school, he wrote a letter to the teacher and told her how distressed he was about his father's imprisonment. My heart broke when I heard that,” said Mr. Hu's wife.

“Those ten years were really difficult for us. I had to work long hours at a low-paying job, because I didn't have any special skills or higher education. I was barely able to make ends meet for my family.

“We lived in a 300-square-foot apartment, and I bought hardly any furniture during that time. I longed for my husband's return every day. But when he was finally released, we were all so shocked and devastated to see him standing before us, in that terrible shape.

“Now he is a vegetable and still in prison. My son, who has already gone to college, always asks me about him. I also have to take care of my bedridden mother-in-law. I often tell myself that I have to be strong because my family needs me.”