(Minghui.org) The 2017 New Zealand Falun Dafa Practitioners Cultivation Experience Sharing Conference took place in Auckland on September 2, 2017. Fourteen practitioners shared their understandings from the practice, and how they looked inside to improve themselves and save people. Many practitioners were moved to tears by the sharings and pure energy field at the conference. 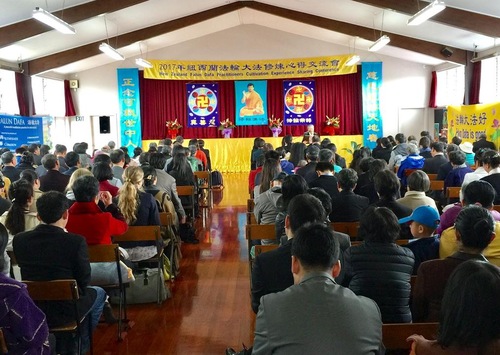 Practitioners learned from each other during the experience sharing conference in Auckland, New Zealand on September 2, 2017.

Li Kewei, a member of the Tian Guo Marching Band, talked about how he let go of complaining and the attachment to comfort.

When a local practitioner later asked the two young men why, they replied, saying that the Tian Guo Marching Band was miraculous. They said, “During the performance each band member appeared as a rotating Falun, and the entire band was a larger rotating Falun. After a while, each band member became a lotus flower and the entire band was a larger lotus flower. On the top of lotus flowers was the Master of Falun Dafa, golden and shining. And all members were also performing inside Master's stomach. It was amazing!”

From this, Mr. Li learned to meet a high performing standard for the band because it is important for people to know the wonderfulness of Falun Dafa.

Grace is a quiet Western practitioner. Prior to beginning the practice in 2016, she was an alcoholic, and on drugs. She also spent much time on social media every day. In addition, she had homosexual desires, as well as depression and anxiety.

After reading through the book Zhuan Falun for the first time, she felt the homosexual desire being eliminated. The more she studied the Fa, the weaker these negative thoughts became. She said, “I learned that cultivation practice was teaching me what is right and what is wrong. By looking within we can find our attachments, then follow the Fa and eliminate attachments.”

Grace said that both her body and mind are being purified by Dafa every day. This makes her very happy.

Ms. Shao has worked in news media for more than ten years, in sales. In 2012, she had the symptom of serious illness karma. “For about a month, I could not lie down or sleep,” she said. Since she could not sleep, she decided to listen to Master's Fa lectures, because she knew that only Falun Dafa could help her. In addition, she looked inward to see if she had any attachments. She subsequently noticed her jealousy, as well as the attachment of validating herself. These existed both in her family environment, and when she worked on projects with other practitioners.

“About one month later, I could sleep one or two hours every day. So I began to contact clients for my work,” she said. When she first dressed up to meet customers, her entire body was in pain. She nonetheless continued, because she knew it was something she had to do. With Master's help, Ms. Shao found new clients, and her sales performance increased significantly. Her body was also purified by Master in these years.

After the conference, several practitioners said they realized that cultivation practice involves both personal cultivation and saving sentient beings. One practitioner said, “The requirement is the same. That is, I have to learn from other practitioners, and identify the gaps between myself and requirements of the Fa, to catch up. Master has sacrificed tremendously for us. I have to remain diligent to save people.”

“Improving Myself While Teaching Computer Skills”