(Minghui.org) Falun Gong practitioners held a parade on September 23, 2017, in Montreal, Canada, to let people know that the spiritual practice is being persecuted in China. They also called for the former head of the Chinese Communist Party (CCP) to be brought to justice for initiating and directing the persecution campaign that has gone on for 18 years. 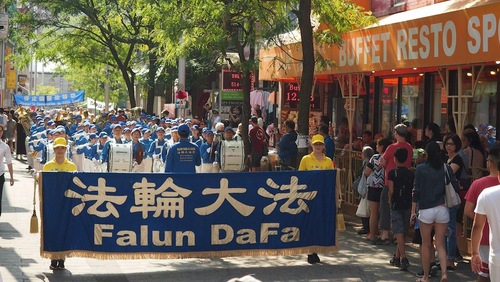 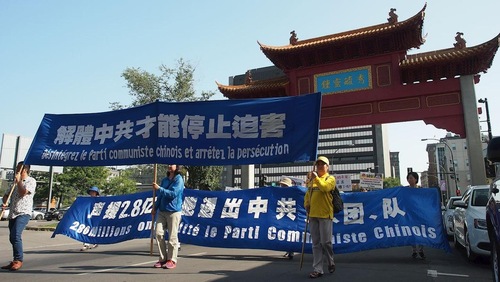 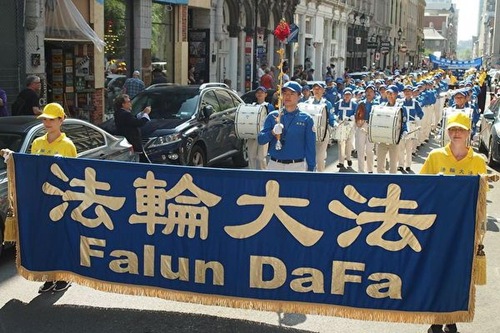 Practitioners march in Montreal to call for an end to the persecution.

September 23, the "autumnal equinox," was clear and sunny in Montreal. Residents and tourists lined the streets to enjoy the beautiful weather. The practitioners' parade began at Zhongshan Park, marched through Old Town, passed the Nortre Dame Basilica, went down St. Laurent Boulevard, and circled Chinatown before returning to the park.

A couple visiting from Ottawa saw the parade in Old Town and expressed their support for practitioners' effort to end the persecution.

The man said, “I know that the CCP authorities are illegally suppressing Falun Gong and are persecuting practitioners. They have even harvested practitioners’ organs while they were still alive. That is simply beyond my imagination. It's cruel and despicable!

“I have been concerned about this (persecution) for ten years, especially in the last three or four years.”

He also praised the Tian Guo Marching Band, saying, “Thank you for the good music. I know that many of the band members are at risk and may not be able to return to China to be reunited with their loved ones. They have paid a high price. They are quite impressive!"

A Man from China: "I think Falun Gong is great!"

The spectacular Tian Guo Marching Band, the colorful banners with messages about Falun Gong and the persecution, and the exercise demonstration by Western practitioners drew the attention of many Montreal residents and tourists who stopped to watch and learn about Falun Gong. They also learned about the persecution of the practice in China.

“I think Falun Gong is great!” said a Chinese man who was visiting relatives in Montreal. “It has not been easy for them to persevere for so many years under the CCP's brutal suppression.”

He said that it is very clear that the persecution of Falun Gong is illegal. He said, “My sister-in-law's illnesses were all gone after she began practicing. This practice is really great, it harms no one, but the communist party is too vicious!”

He said that he lives in Beijing and witnessed practitioners' peaceful appeal on April 25, 1999. “When I heard that practitioners came to Beijing to appeal, I went to see it. So many people, but not one scrap of paper was left on the ground! ... I also saw practitioners’ rally on Capitol Hill in the U.S. Very impressive! What the CCP is most afraid of is Falun Gong.”

A Chinese Man from Canada: "I understand"

Some of the older Chinese who live near Montreal’s Chinatown greeted practitioners who told them about the persecution. Some said, “I know” and “I understand.”

One resident, Mr. Zhang, said, “In China, the level of morality continues to decline. Falun Gong is a positive force that uplifts the morality of the Chinese people. Some people are still afraid and dare not approach you, but they know in their hearts that Falun Gong enables people to improve their moral standards, and, as far as I can see, the Chinese are waking up and the Communist Party is going to be eliminated.”

After the march, practitioners did the exercises in Chinatown's Zhongshan Park. Their serene exercise movements attracted local residents, many of whom stopped to ask about Falun Gong. Some learned to do the exercises.

Tanya, who had just started practicing three weeks ago, said that the practice made her feel very calm. “I have been hoping to find a mentor. About three weeks ago I met a gentleman on the subway who handed me a flyer. He looked happy and peaceful. He told me there were free classes every Saturday, so I went.

“The lady who taught me the exercises was very kind and friendly. I felt very comfortable and I liked it very much. I have already begun to read the book Zhuan Falun!”

“Falun Dafa Teaches Me to Always Do the Right Thing”