(Minghui.org) Activities to introduce Falun Gong and expose the persecution of the peaceful spiritual practice in China were held in Taiwan’s Shoufeng Township on September 17. Local residents showed their support for Falun Gong by signing a petition against Jiang Zemin, the Party’s former chairman and the person most directly responsible for the persecution. 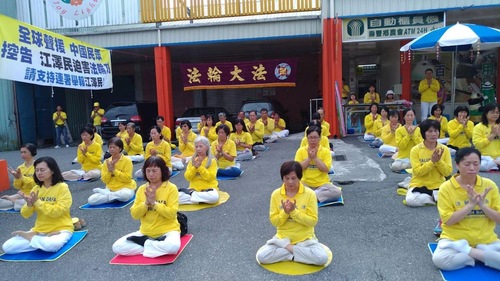 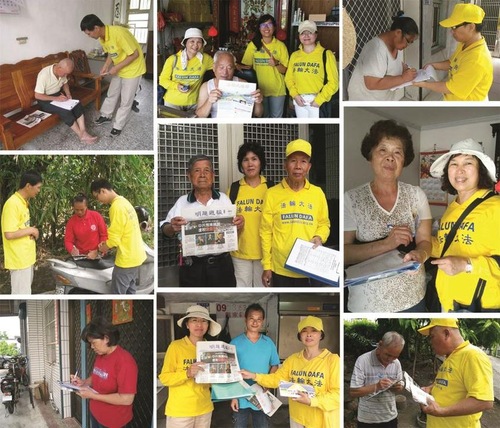 On hearing about the CCP's atrocity of harvesting organs from living Falun Gong practitioners, a ninety-two-year-old gentleman said, “It's intolerable by heavenly law. Those who participated in it [organ harvesting] are in hot water. Heaven's vengeance is slow but sure!” He hoped these people would stop right away.

Mr. Lai, another local resident, told a Falun Gong practitioner that he had gone through a liver transplant eight months ago. The transplanted liver was from his son. While he was waiting for the transplant surgery, he heard about organ harvesting in mainland China.

One of his friends was planning to go to the mainland China for a liver transplant. His friend would be charged 3,000,000 Taiwan dollars. The hospital told his friend that no waiting would be needed, but his friend didn't know where the liver would come from. Mr. Lai had suggested his friend use part of a liver from his family member, so that no innocent people might be killed for the liver. Mr. Lai said every life is priceless, and he thought no one should go for an organ transplant in the mainland China unless the organ source was clearly identified.

One lady from the Yuemei indigenous group said, “Hurry and tell everyone. Let's gather support from as many people as possible and call for an end to the persecution!” She encouraged practitioners to persist in their work, and believes everyone should give a helping hand.

“A “Magic Bullet” for Asthma and Panic Attacks”

“Use Every Opportunity to Tell People about Dafa”