(Minghui.org) The 2017 Australia Falun Dafa Experience-Sharing Conference took place in Sydney on September 10. More than 1,000 practitioners attended the event at the Orion Centre, where 23 practitioners presented speeches on their experiences in cultivating their hearts and minds according to the teachings of Falun Dafa. 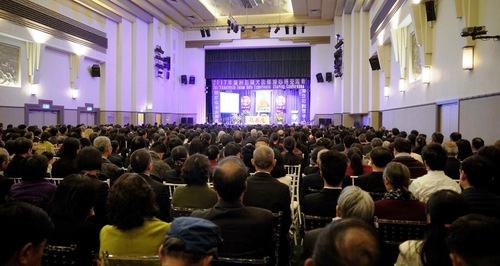 Several practitioners related how they behaved according to Truthfulness-Compassion-Forbearance, the principles of Falun Dafa. One example was Ms. Sun, who coordinated a car tour in Australia last year. Practitioners visited many cities during that trip to raise awareness of the persecution in China.

“Before the trip, I made detailed arrangements on where to stay, where to eat, who would do what, and so on,” she explained. But after arriving at the first hotel, she and other practitioners had disagreements. When meeting city officials later, she was afraid the practitioners who went to the meetings would not do well.

From these xinxing conflicts, she gradually learned to let go of her notions and focus on the overall effect. “I just need to pay attention to what is needed to achieve the best results instead of insisting on my own opinions. If we all support the practitioners who go to meet city officials with strong righteous thoughts, things will go well,” said Ms. Sun. “After all, what we do is just on the surface level. It is Master that helps a lot to make things happen.”

Ms. Zhai said that, when she went out to put up posters to promote Shen Yun, she sometimes stayed away from Chinese stores to avoid harsh words or negative opinions. She later realized that those people had been brainwashed by the communist party. “They are also victims of the Chinese Communist Party’s hate propaganda and violence. And I could be the only chance for them to learn the truth and have a great future,” she said. After that, she got rid of that attachment and visited those stores. Even if the stores did not appear to have space for posters, she went in anyway to talk with the staff and leave pamphlets.

Ms. Li, who often went to tourists sites to talked with Chinese tourists about Falun Dafa, said some tourists wanted to quit the Party after she’d said just a few things. “But I have relatives and friends who have known about the persecution of Falun Dafa for many years, but they still refuse to quit the communist organizations.”

Later Ms. Li came to understand that practitioners have to act according to Truthfulness-Compassion-Forbearance all the time to help those people truly understand what Falun Dafa is and why they need to quit the Party. “It took 6 years for me to convince one person, 7 years for another, and 17 years for yet another,” she said. 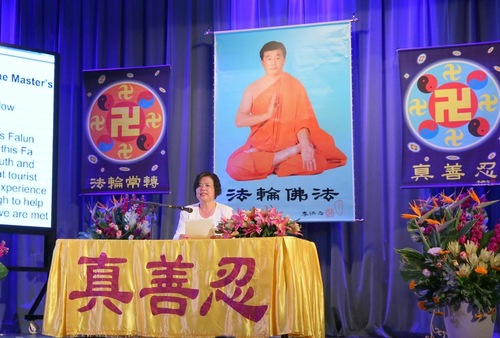 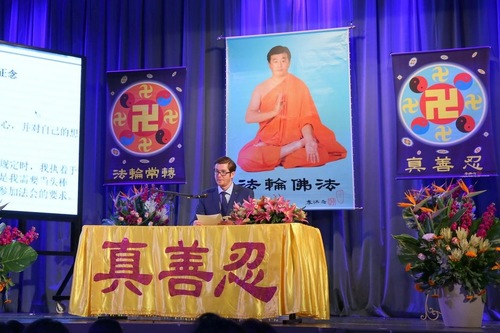 23 practitioners spoke at the conference.

Several practitioners discussed how they could let go of selfishness for better cooperation. Ms. He has a full-time job with a news media company. “Because I could get things done, I had many responsibilities and I felt good about that,” she recalled. When the organization was re-structured, some of her responsibilities were assigned to other practitioners and she was disappointed.

“After studying the Fa further, I came to understand it was jealousy. In fact, we are all practitioners. It does not matter if we are a CEO, a manager, or a low-level employee, because the requirement for all of us according to the Fa is the same.” She no longer felt lost and was able to collaborate well with others.

Mr. Wang had extensive managerial experience before joining a new practitioner media company. By paying little attention to personal interest and forsaking the Party culture, he was able to coordinate and lead the sales team. Recently, he and a team member signed a contract with a distributor from China, and he also told the client about Shen Yun.

“But after the first issue of advertisement went out, the distributor called me, saying they had received threats for doing business with us,” he said. Mr. Wang met the client and had a long conversation about Falun Dafa, about the physical and spiritual benefits he gained from it, as well as about his business experience in Australia. They reached an agreement to honor the contract in a way that would reduce stress on the client. “From this, I learned that the compassion we have developed from cultivating and the experiences we have accumulated in this society will all help us with truth-clarification and saving people.”

Liam, a psychologist, said he learned a lot from this year's New York Experience-Sharing Conference. “I found lots of my attachments, such as the tendency to complain or get angry at other practitioners, making excuses for not going to group Fa-study, switching projects frequently, and looking down on other practitioners. When I thought about it further, I realized all of them were rooted in selfishness,” he said.

When looking within, Liam said his negative attitudes toward other practitioners—such as complaints and anger—were also manifested on his physical body. In fact, it looked like he had early-stage skin cancer on his hands. “To me, my hands reflected the numb and cold attitude I had towards other practitioners,” he added.

After realizing this, Liam regained righteous thoughts and felt guilty about the harm he had caused other practitioners. “The selflessness of other practitioners also warmed my heart, making me willing to take responsibility for projects I have been involved in,” he said. After having those thoughts, he felt energized, and his skin problem was also gone.

Several young practitioners shared their stories at the conference. Beginning to practice Falun Dafa as children following their parents, they did not have a deep understanding of cultivation in the beginning. In the past 10-plus years, by telling people about Falun Dafa and the persecution with their parents, many have found their path and remained determined in cultivation.

One practitioner began to cultivate in 1997 when she was 6. “After the suppression in China started in 1999, my mother was arrested and I stopped practicing when I was 11. I found everyone in this world was selfish, so I became one of them,” she recalled.

Once she was sick and vomited so badly she thought she would die. At that moment, she realized that the many things she had been fighting for were insignificant. “My mother played Master's lectures for me. I also read 20 pages of Zhuan Falun. Then I was totally fine,” she said.

After that, she began to study the Fa with other practitioners and to follow the Falun Dafa principles. “I became more open minded and was able to be considerate of others,” she added, “I have walked a long way as a Falun Dafa practitioner. And I sincerely appreciate Master's guidance and care throughout my cultivation.”