(Minghui.org) The Art of Zhen Shan Ren (Truthfulness, Compassion, Forbearance) International Exhibition was held in Lviv, Ukraine from July 17 to August 4, 2017. Patrons were touched by the message of Falun Dafa conveyed in the beautiful artworks. One said the principles of Truthfulness, Compassion, Forbearance are the basis of all righteous belief. Another said the art exhibition restores morality and brings a bright future. 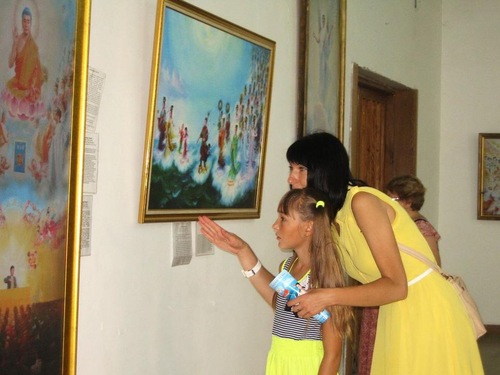 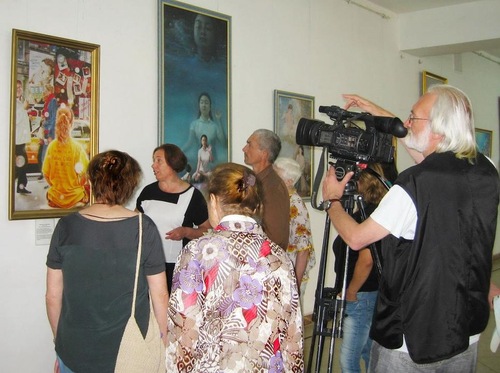 The Art of Zhen Shan Ren International Exhibition is held in Lviv, Ukraine.

Naga, local chair of the Ukrainian Women's League, told the reporter, “The art exhibition brings a bright future to our planet and triggers deep reflection. The paintings show believers' search and pursuit for freedom and brightness. However, they [Falun Dafa practitioners] have sacrificed a lot and overcame enormous obstacles.”

Naga's family has experienced persecution by a communist regime, under which her parents have been imprisoned and her brother was killed. She found that the evocative paintings were filled compassion and tolerance. She said, “Truthfulness, Compassion, and Forbearance include powerful energy, which helps the characters in the paintings resist the evil and transcend inhuman suffering. It makes me believe they can conquer anything. Their eyes and faces tell us so.”

She also interpreted from the paintings that those who commit crimes will be brought to justice after the violent totalitarian regime collapses. “The evil won't last forever, because the art exhibition will awaken many people. More and more, even the whole humanity will unite. The power of compassion will disintegrate the degenerate environment.”

Evgeny, an art professional, said even though some paintings depicted scenes of torture, he felt incredibly comfortable and calm near the paintings. He said that only those with strong spiritual power and firm determination could present the meaning of these paintings so well.

Tourists from other countries also visited the art exhibition. Jonas and Lolita from Lithuania said the principles of Falun Dafa awakens people and makes them think about the future of mankind and revival of spirituality.

Elena from Siberia said she had learned shocking information from the art exhibition and that she would tell her family and friends not to miss it. Another visitor from Belarus said the theme of the art exhibition entered her heart and made her think of the laws of the universe. She believes that there is only one truth but that it manifests in various ways.