54 Falun Gong Practitioners Released in First Half of 2017

(Minghui.org) According to information compiled by Minghui.org, 54 Falun Gong practitioners in 21 provinces and centrally-controlled municipalities were released in the first half of 2017 after a police department, Procuratorate, trial court, or appeals court decided to terminate their prosecution. 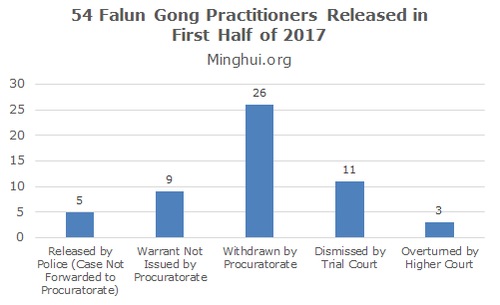 Five practitioners were released before police forwarded their cases to procuratorates.

Ms. Han Xuejiao in Shanghai was arrested on February 17, 2017 and released one month later, thanks to her family’s rescue efforts.

Ms. Hao Shengqiao of Hailin City, Heilongjiang Province was arrested on March 22, 2017 and released on April 5, after police received numerous letters from supporters calling for her release.

Nine practitioners were set free after their local Procuratorates decided to not issue warrants for their arrests.

Ms. Qu Beixiang of Zhenjiang City, Jiangsu Province was arrested on March 11, 2017 and given criminal detention. The local Procuratorate interviewed her and decided against issuing an arrest warrant. She was released on March 24.

Twenty six practitioners regained their freedom after their local Procuratorates dropped indictments against them.

Mr. Bai Jingjie of Wu’an City, Hebei Province was arrested on August 13, 2016. Many practitioners called the police to seek his release. On January 8, 2017, the local Procuratorate withdrew its indictment against him, and he returned home on the same day.

Eleven practitioners were released after their local trial courts acquitted them or dismissed their cases due to lack of evidence.

Ms. Huang Yanzi of Jieyang City, Guangdong Province was arrested on July 13, 2016, and tried on January 17, 2017. Her lawyer defended her constitutional right to freedom of belief, and the presiding judge acquitted her.

Ms. Zhang Sufang of Yancheng City, Jiangsu Province was arrested on July 9, 2016, and later sentenced to two years in prison. She appealed and testified at her appeals hearing how Falun Gong taught her to be a good person. She stated that she was only exercising her constitutional right to freedom of belief.

The higher court ruled that none of the evidence could prove Ms. Zhang guilty. She was released on March 29, 2017.

Eleven practitioners had their convictions overturned and are awaiting retrial.

Six practitioners already had their cases forwarded to local courts, but the courts decided to return the cases to the Procuratorate for additional information.

4 Have Indictments Dropped but Remain Detained

Four practitioners saw their indictments dropped, but police have refused to release them.

They are Wang Fengying, Chen Yixin, and Cao Shulan (all residents of Nanchong, Sichuang Province) and Zhou Yuqin of Wuhan, Hubei Province.

69 Practitioners Have Cases Returned to Police

A total of 69 practitioners had their cases returned to police by Procuratorates for insufficient evidence.

He Shuqin and Lu Shejiao