(Minghui.org) An article published in the Philadelphia Sunday Sun on August 18, 2017, covered an August 12 activity held by local Falun Gong practitioners to raise awareness of the persecution of Falun Gong. 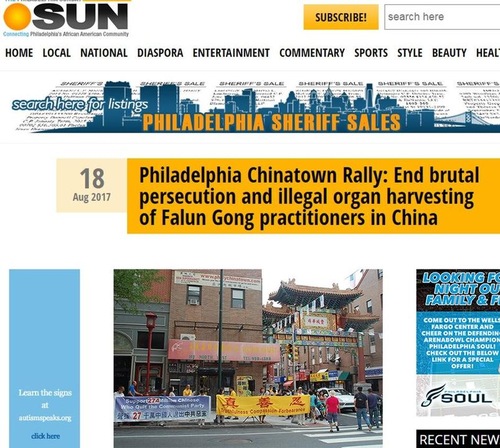 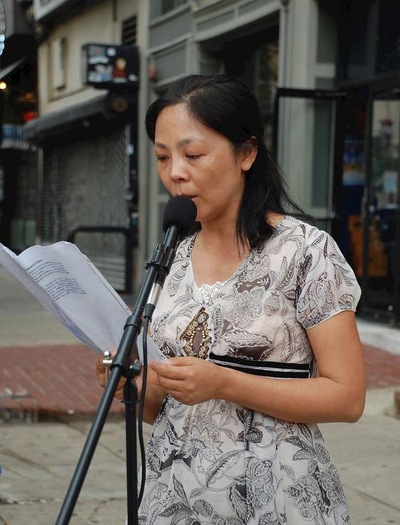 Ms. Guo Qiong recounting her experience of persecution in China.

The article reprinted a speech by Ms. Guo Qiong, a practitioner from China.

Ms. Guo Qiong from Nanjing, stated, “When I was young, I was very weak and had incurable chronic illnesses. In the spring of 1995, I started to practice Falun Gong and soon regained a healthy body. While the practice teaches people to be good by following truthfulness, compassion and tolerance principals, I developed positive results and my body and spirit were immersed in joy and peace.

“However, my life was turned upside down when the Chinese Communist Party and then head of the State Jiang Zemin started to persecute Falun Gong in July 1999. In the past 18 years, I was unlawfully arrested over seven times, and I was sent to a detention center, a mental hospital, and so-called ‘brainwashing sessions’ on different occasions. I was unlawfully detained in a mental hospital and injected with unknown drugs.

“In February 2000, I was sent to a mental hospital because I did not quit practicing Falun Gong. The hospital kept me in custody and started to force me to take unknown drugs. At the beginning, I hid the pills under my tongue and then spit them out when no one was around. A nurse soon noticed what I was doing, and they started to force me to swallow those pills. Though I didn’t know what drugs they were, my body felt very bad and I spit up blood several times.

“I also met a Falun Gong practitioner who was forced to take a high dose of drugs. Her face became black and she could not control her facial muscles… From my personal experience, I knew those were not regular medicines and taking those drugs was excruciatingly painful and it is a form of torture. I was kept at this hospital for 22 days. Every day was very long for me and I felt that I would go crazy if I had to stay one day longer.

“In May 2004, while I was at my workplace, Chinese Communist Party officials from my home district forcibly took me to a brainwashing session which was held at a local hotel. Due to endless fear and pressure from the Chinese Communist Party, my parents became very sick and passed away in their 60s in great sorrow. My husband had to work long hours every day to support our family.

“No one was available to take care of my one-and-a-half-year-old daughter… At the brainwashing session, officials repeatedly threatened me to send me to labor camp if I refused to give up my belief. Out of anxiety and endless worry, I lost a lot of hair. I was kept at the brainwashing session for over a month. Soon after that, my company forced me to resign because of pressure from the Chinese Communist Party.

“This year, my family came to the US on a tourist visa. I was praying all the time for a land of freedom, freedom of religious belief, and freedom from fear and persecution. Because of this brutal persecution of Falun Gong, I had to leave my country. Whenever I look back, I cry and feel such pain. I also know that exposing the persecution is my responsibility so that it will end soon and more people like me will be saved. I hope that all kind-hearted people will take actions to help us end this persecution!”

The article provides background information about Falun Gong for readers unfamiliar with the practice. “Falun Dafa or Falun Gong is a mind and body cultivation practice practiced in more than 100 countries worldwide. This practice embodies its core teachings based on the highest characteristic of the universe – Truthfulness, Compassion, and Forbearance. Since July 1999, the Chinese communist party began persecuting the practitioners of Falun Dafa for their belief in Truthfulness, Compassion, and Forbearance.

“Even today the Chinese government has been systematically illegally imprisoning, torturing and performing live organ harvesting on practitioners of Falun Dafa.”

The story concludes with information about recent action taken by United States elected officials to take a stand against the oppression in China. “The US Senate introduced resolution 220 to express solidarity with Falun Gong practitioners who have lost lives, freedoms, and rights for adhering to their beliefs and practices and condemning the practice of non-consenting organ harvesting, and for other purposes.”