As a U.S. Government-funded non-governmental organization (NGO), Freedom House conducts research and advocacy on democracy, political freedom, and human rights. Founded in October 1941, it publishes annual reports that assess each country's degree of political freedoms and civil liberties, which are frequently cited by political scientists, journalists, and policymakers.

“Despite a 17-year Chinese Communist Party (CCP) campaign to eradicate the spiritual group, millions of people in China continue to practice Falun Gong, including many individuals who took up the discipline after the repression began. This represents a striking failure of the CCP’s security apparatus,” the report concluded. 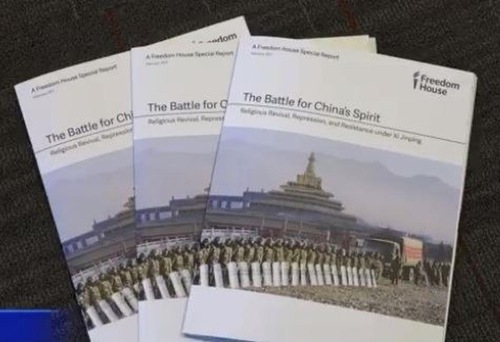 “The Battle for China’s Spirit,” published by Freedom House on February 28, 2017, has a 22-page section on Falun Gong with 118 third-party references. The Chinese version became available on August 22, 2017. Click the image to download the chapter referencing Falun Gong in Chinese.

The report first reviewed the widespread popularity of Falun Gong in China prior to 1999. It stated Falun Gong is a spiritual practice that features five sets of meditative exercises and adherence to the principles of Truthfulness, Compassion, and Tolerance.

“Throughout the early and mid-1990s, Falun Gong, its practitioners, and founder Li Hongzhi enjoyed substantial government support and positive coverage in state media.”

The report explained how the practice spread through communities by word of mouth, noting that,“Chinese people from every stratum of society—doctors, farmers, workers, soldiers, intellectuals, Communist Party members—began taking up the practice.”

“By 1999, according to government sources and international media reports, at least 70 million people were practicing Falun Gong.”

The report went on to analyze the start and progress of the suppression. Not only did the number of practitioners exceed the number of Chinese communist members, Falun Gong's traditional spiritual philosophy also threatened the communist's political struggle ideology, making the meditation system viewed as a threat.

This later led to the arrest of dozens of practitioners in Tianjin, a city near Beijing, in April 1999. “Those calling for their release were told that the orders had come from Beijing. On April 25, over 10,000 adherents gathered quietly outside the national petitions office in Beijing, adjacent to the Zhongnanhai government compound, to ask for an end to abuses and recognition of their right to practice.”

“Then premier Zhu Rongji took a conciliatory stance toward Falun Gong after the April 25 demonstration. He met the petitioners’ representatives and ordered the release of the adherents in Tianjin, after which those in Beijing voluntarily dispersed,” stated the report.

But then Chinese communist leader Jiang Zemin decided to “eradicate” Falun Gong. “In the context of China’s authoritarian political system, once Jiang made the arbitrary and arguably illegal decision to ban Falun Gong and asserted his will over other members of the Politburo Standing Committee, there were few institutional or legal obstacles to stop what came next.”

To carry out the persecution, Jiang created an extralegal, plainclothes security force known as the 610 Office. “In July 1999, the campaign began in earnest, and the full weight of the CCP’s repressive apparatus was brought down on Falun Gong. Demonizing propaganda flooded the airwaves, thousands of people were detained, and millions were forced to sign pledges to stop practicing.”

Falun Gong believers in China have responded to the CCP’s persecution with peaceful resistance. “In the first days and weeks of the ban, many picketed local government offices. When these lower-level officials proved unreceptive, adherents began writing letters to higher authorities or petitioning directly in Beijing. They shared their positive experiences with the practice in an effort to convince officials that Falun Gong posed no threat to society. By 2000, practitioners unfurling banners and performing qigong exercises were a daily presence on Tiananmen Square, though most were immediately arrested.”

The report explained that, as the suppression continued, practitioners shifted their focus to raising awareness to both the authorities and the public, distributing printed, audio, and visual materials to expose the severe human rights violation and explain the facts about Falun Gong.

The report described how the unthinkable, the killing of innocent people for their organs, could come to be: “It is in the context of dehumanizing propaganda, severe abuse in custody, and economic inducements that the ultimate form of financial exploitation has been reported: the killing of Falun Gong detainees and the extraction of their organs to be sold at high prices to Chinese patients and foreign 'transplant tourists' as part of a multibillion-dollar industry.”

According to the report, evidence of forced organ harvesting targeting Falun Gong prisoners of conscience first surfaced in 2006, and several investigations by independent journalists and legal specialists have found them to be credible. Many members of the medical community have also expressed concern.

Since May 2015, large numbers of Falun Gong practitioners have filed criminal complaints against Jiang for persecuting Falun Gong. The report explained that “Supreme People’s Court guidelines that took effect on May 1, 2015, require judicial authorities to accept criminal complaints submitted by individual citizens; previously, they had the leeway to reject the complaints. A number of articles on Minghui raised awareness of the change and proposed that adherents take advantage of Xi’s anticorruption drive—which had brought down key Jiang allies—by submitting their accounts of persecution and calling for Jiang to be investigated.”

But now, it's not only the Falun Gong who dare to speak out. “Perhaps most impressive is the large contingent of non-practitioners who have joined Falun Gong initiatives,” the report stated. “Despite the 2015 crackdown on human rights lawyers, hundreds continue to represent Falun Gong clients. Tens of thousands of people around China have signed petitions, not only for the release of detained neighbors, but more recently in support of Jiang Zemin’s prosecution.”

Painting a picture of the severity of the persecution, the report stated, “Falun Gong practitioners across China are subject to widespread surveillance, arbitrary detention, imprisonment, and torture, and they are at a high risk of extrajudicial execution.”

The report noted that the fact that Falun Gong has survived such a brutal attack indicates that the Party's persecution has failed. “When one considers this reality and the factors that led to the ban, it is hard not to conclude that Jiang and the CCP have created a self-fulfilling prophecy, generating the very threats they feared by turning tens of millions of politically loyal citizens and party members into an army of dedicated activists at odds with the CCP.”