(Minghui.org) More than 20 college and university Falun Dafa Clubs held a five-day summer camp in central Taiwan, hoping to learn from one another and improve, so that they can raise awareness more effectively on campuses.

On August 13-17, 2017, the participants studied the teachings together and shared their thoughts. They went out to talk with people about the persecution of Falun Gong in China and discussed why it is wrong.

Falun Gong, also known as Falun Dafa, is a spiritual discipline that has been persecuted in China since 1999. The practitioners held an experience sharing forum on the final day of camp to exchange the positive things they had learned during the previous few days. 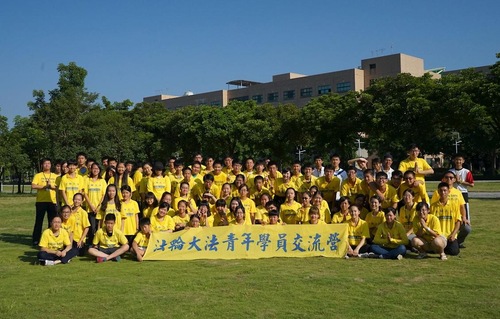 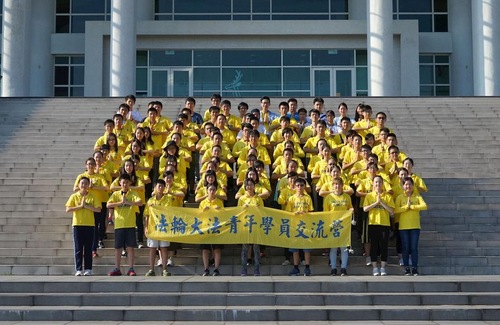 Falun Dafa Clubs from more than 20 colleges and universities held a summer camp in central Taiwan for graduate and undergraduate students to learn and better themselves in their practice.

Yu, a graduate student, said that in his sophomore year he spent a lot of time helping with class activities. He had gradually slacked off in his cultivation because no one could see if he was doing well or not, and he felt he could always make it up later if he wasn’t doing well. On the other hand, everyone could see his academic performance, so he spent a lot of time studying and on other trivial details.

He often put off the three things until the end of the day, which meant that he wasn't very attentive when he studied the teachings. In March he had to write a research article. He spent a great deal of time writing and doing research, and the pressure made him ill-tempered. As the deadline approached, he suddenly realized that what he truly needed was to do well in his cultivation.

He then reserved the best time of the day for Fa study and the exercises and began memorizing the text in Zhuan Falun. His personality improved dramatically and his thoughts became much clearer. He found many key pieces of literature in a short time and finished the article two weeks before the deadline, which surprised and impressed his academic advisor.

There was a student in Yu’s class who came from China. He wanted to tell her the truth about the persecution but couldn’t find an opportunity. One time the lecturer mentioned Falun Gong and the Nine Commentaries on the Communist Party in class. The lecturer had some misunderstandings about Falun Gong and believed that it was more than just a cultivation group. Yu thought that his comments about the practice could mislead other students, so he asked the lecturer to give him 15 minutes to introduce Falun Gong to the students.

He talked about Falun Gong and the persecution in China in detail. The students were able to understand what was happening, and the lecturer stopped criticizing Falun Gong. The student from China raised her hand and asked questions, and they started talking to one another.

Colleagues in Military Stunned by His Changes After Learning Falun Dafa

Xie was in the military last May when he started the practice. He said that before that he was rather selfish and good at pretending to be someone he wasn’t. He believed that if he acted like he was physically weak, he could avoid a lot of work in the military. As a result, other people had to do his job. Based on his behavior, even rookie soldiers despised him. Even though his supervisor talked to him about the issue many times, he refused to change.

The first day he learned Falun Dafa, in his dream, he felt that a constraint that he’d been under for a long time had been removed. He knew that he could follow the principles of Truthfulness-Compassion-Forbearance in everything he did after he woke up.

After he returned to his military role, his colleagues and supervisor noticed that he was a different person. He shouldered his responsibilities and helped those in need. He was in charge of half of the workload in the next few military exercises. When others asked him what changed him, he said, “I learned Falun Gong and found the most important thing in life.” Two months later he was transferred elsewhere, and everyone came to say goodbye.

A week before his promotion, Xie was told that the position he was about to fill had been filled. Just when he was feeling upset, the person said to him, “You have been removed from your current position, too.” He was about to explode with anger. Suddenly he remembered what Teacher said in Zhuan Falun:

“But as a practitioner, you are in principle protected by Teacher’s fashen. Others cannot take away what is yours, even if they want to. We therefore believe in following the course of nature. Sometimes, you think that something should be yours, and others also tell you that it is yours. Actually, it is not. You may believe that it is yours, but in the end it is not yours. Through this, it can be seen whether you can give it up. If you cannot let it go, it is an attachment. This method must be used to get rid of your attachment to self-interest. This is the issue. Because everyday people are not enlightened to this principle, they will all compete and fight before profits.”

He took the news like a practitioner and gradually let go of his attachment to fighting. Xie said, “The difference between a man and god is one thought. The moment I let it go, I passed the test.”

Cherishing People Around Him by Fitting into Everyday Society

Hong said that once he talked about his future plans to a teacher, who commented that Hong didn’t love himself because he frequently said, “It doesn’t matter.” He realized that, subconsciously, he didn’t care about society or anything in his life. He thought that he could leave at any time when he reached consummation, so why should he care about fame and self-interest.

He came to the understanding that, at some level, he didn’t cherish himself. It was a negative factor that would eventually lead him to not cherish his cultivation and not care about studying and doing the exercises. Because he had never cared about ordinary things, it was hard for him to interact with others.

Hong decided to change. Now it is easier for him to start a conversation. He said that, if he tried to live his life like an everyday person, he would know better what an everyday person needs. By doing that, people would think that practitioners are good people and that Falun Dafa is good.

Hong said, “When I tried to conform to everyday society a little more, it was easier for me to save people because they felt that I was friendly and close to their hearts.” With this change in attitude, he was able to help a person become interested in reading Zhuan Falun and start posting Falun Gong-related information on his social media.

““The Best Place to Present the Best Book””

“The Secret to My Thriving Small Business”