Ottawa, Canada: Raising Awareness About a Canadian Citizen Detained in China for Her Belief

(Minghui.org) Falun Gong practitioners from Ottawa gathered at ByWard Market on August 19, 2017 to raise awareness about a Canadian citizen who is being detained in China. The practitioners presented an exercise demonstration, displayed posters and banners, and collected petition signatures.

Canadian citizen Sun Qian was arrested at her Beijing home on February 19, 2017, and taken to the Beijing First Detention Center, where she was tortured. Many Canadian officials have expressed concerns over these severe human rights violations. 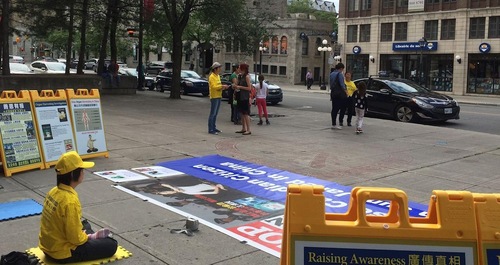 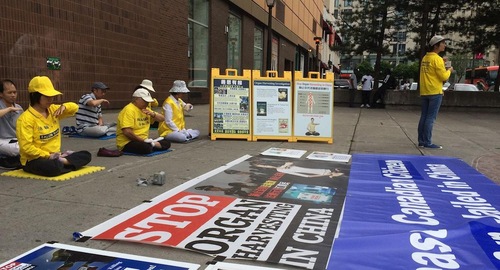 Group meditation and signature collection on George Street at ByWard Market on August 19, 2017.

Passersby were surprised to hear about the case. Web developer Alex Beemer said the government should raise this issue with China, and he hoped that Ms. Sun would regain her freedom and return to Canada safely. He said, “To some extent, the principles of Truthfulness-Compassion-Tolerance have many similarities. They are something important to all of us.”

Cynthia Buarque said that everyone has their belief, and Falun Gong practitioners should not be mistreated, because they have done nothing wrong. She agreed that the Falun Gong principles are good for individuals and society in general. She added, “We should support them, instead of them harming innocent people.”

Suzanne Torole, who lives close to the Chinese Embassy, has seen the protests by Falun Gong practitioners there every day. She signed a petition at ByWard Market, urging a stop to the atrocities in China. She said, “It’s wrong for the Chinese communist regime to decide which groups to suppress based on its own interest. Many of these issues, especially forced organ harvesting, are serious human rights violations.”

Steven Padhand said he was aware of the persecution in China, but this was the first time he heard about organ harvesting from living practitioners in China. He said that even if the Canadian government does address the topic with China directly, it should work with other countries to highlight the issue in international society, because it involves “basic humanity.”

““The Best Place to Present the Best Book””