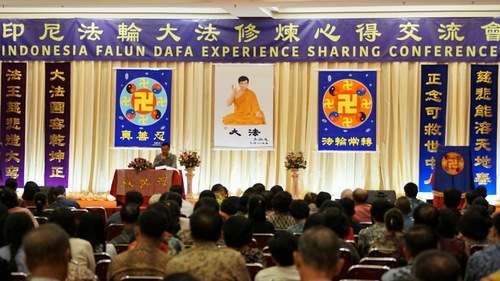 The first speaker was a native Indonesian woman. She told the attendees how she overcame fear and talked to local government officials about Falun Dafa.

She said the Chinese Embassy often sends materials defaming Falun Dafa to the local government in Indonesia. This motivated her to tell the officials the facts of the meditation and spiritual discipline. She found that the government officials were kinder than she expected. “It was not that scary,” she said. “I told them how to treat the materials sent by the Chinese Embassy.”

Mr. Lu has practiced Falun Dafa for 15 years. He talked about how he introduced Falun Gong to high school students and faculty. One time, he taught 1,100 people the exercises and the basic principles of Falun Gong. Since that, the school has contacted him multiple times to set up additional sessions.

Mr. Su, a veteran practitioner who started 14 years ago, shared how he rid himself of the attachment of lust, which is difficult to avoid in modern society. He and his wife, who is also a practitioner, helped each other to break through this test.

“We pulled ourselves out of sentimentality and have become real fellow practitioners who encourage each other to improve in cultivation,” he said. “Now, my mind is clean and clear when reading the Dafa books, which have given me wisdom in my work and cultivation.”

Mr. Su said, “I can really feel the power of Dafa and see the beauty of cultivation.”

Mr. Man shared similar experiences. He got sick a while ago. Through studying Dafa, he realized that the sickness was caused by his attachment of lust. He found the attachment hidden deeply in his heart and got rid of them.

“The sickness karma was caused by my mistakes, because my behavior didn't meet the standard of the Fa. Once I improved, the karma was eliminated,” he said.

Weiwei was introduced to Dafa at the lowest point in his life. He was laid off and lost hope in life. He said Dafa lit up his path. Now, he is a full time reporter at the Epoch Times newspaper.

Weiwei shared how he collaborates with other practitioners and improves himself under the guidance of Dafa, especially how he identified his attachments to fame and personal gain. He told stories of how he let go of such attachments and tries to become a selfless person who always considers others before himself.

Ms. Xie started practicing in 2004. She joined a Falun Dafa march and was targeted by the Chinese Embassy. Government officials demanded that she write a statement renouncing Dafa and threatened to isolate her from local Chinese communities.

Ms. Xie didn't give in. She told her stories of how she used her solid belief in cultivation and changed the attitudes of people around her, who started respecting and welcoming her.

Three speakers mentioned how they helped their children in cultivation, including Ms. Chen's whole family of five. “We have always treated our kids as fellow practitioners. We read the Dafa books and do the exercises together. We share our cultivation experiences joyfully. The children often attend Dafa activities, and they learned what to do.”

“They have now grown up and moved away, but they are still cultivating diligently. We often read together online.”

Mr. Lei said he reads Dafa books to his children before they go to bed every night. “They are used to the environment of cultivation, which helps them to understand Dafa,” Mr. Lei said.

Sulasi, a native Indonesian, had some conflicts with his family. He tried his best and finally convinced his wife and children of the beauty of Falun Dafa. They have started practicing, too. They also talk to their relatives about Dafa.

“I am glad that my wife didn't lose her faith in Dafa when she was severely ill. After five months, she overcame the tribulation successfully,” he said.