(Minghui.org) Today's news from China includes incidents of persecution that took place in 8 cities or counties in 60 provinces. According to this report, 7 Falun Gong practitioners were subjected to mistreatment during their detention, and at least 5 were illegally arrested. 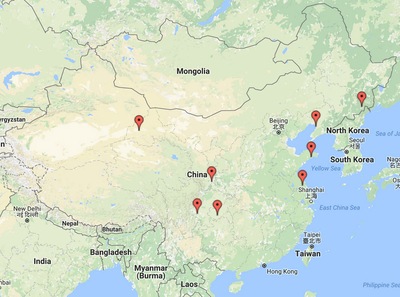 Ms. Chen Cuiyu was sentenced to a four-year prison term in July 2017. She is held at a prison in Nanjing. She was arrested at home by officers from the Dafeng District 610 Office in December 2015.

Ms. Xue Chunfang, Ms. Gao Xiuhua, Mr. Jin Fuzhang, and Ms. Sun Shuqing were arrested at home by officers from the Zhanqian District Police Station on June 28, 2016. They were held at the Yingkou City Detention Center and were tried by the Xishi District Court on April 27, 2017.

Ms. He Xiaoling was imprisoned at Sichuan Women's Prison.

Ms. Yang Xuqin was arrested by officers from the local Political and Legal Affairs Committee and the Domestic Security Division. She was taken to the Wudu Detention Center on January 17, 2017. On June 28, she was tried by the Longnan City Intermediate Court.

Mr. Cheng Degui was arrested by officers from the Lishi Police Station on June 7, 2017. His whereabouts are unknown.

Ms. Ding Fenglan, Ms. Zhang Ximei, and Ms. Li Runhua were arrested and taken to the Shazhou Police Station on July 28, 2017, for talking to people about the persecution of Falun Gong. They were interrogated by Wang Shuguo, a Domestic Security Division captain.

Ms. Zhang and Ms. Ding were released after their families were fined 1,000 yuan. Ms. Li was given a 15-day administrative detention, but the detention center refused to admit her due to her high blood pressure. She returned home.

Mr. Zheng Xufei was arrested by a plainclothes officer on July 14, 2017, for talking to people about the persecution of Falun Gong. He is held at the Rushan City Detention Center. The police ransacked his home on July 17, 2017. His arrest was approved on July 29.