Taipei: Large Group Fa-study Helps Practitioners Learn from Each Other

(Minghui.org) More than 1,700 Falun Gong practitioners attended a group Fa-study at Chientan Youth Activity Center in Taipei on August 19-20, 2017. Despite the large crowd, practitioners came and left in an orderly manner, and the venue was very quiet, with no disruptions.

Practitioners came from Taipei, Xinbei, Taoyuan, Hsinchu, and other areas, and divided the time into five sections to read Falun Dafa teachings.

In the afternoon on the second day, they shared their experiences in following the principles of Truthfulness-Compassion-Forbearance to improve themselves, and saving people by telling them the facts about Falun Dafa. 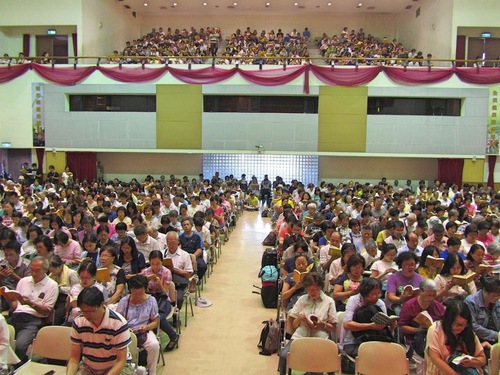 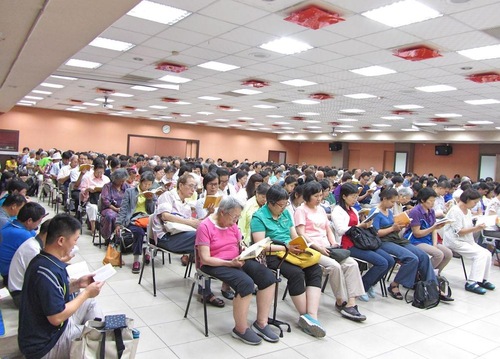 Reading Zhuan Falun together at Chientan Youth Activity Center in Taipei on August 19-20, 2017. 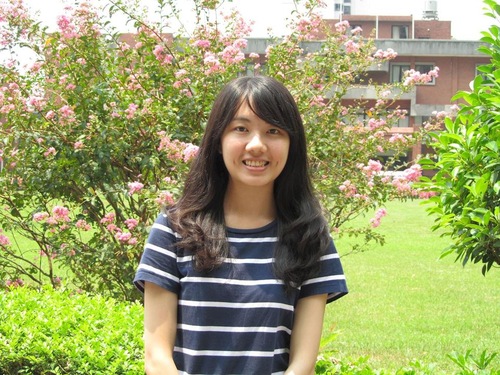 Wei Yin started practicing Falun Dafa four years ago when she was a college student in Kaohsiung.

Wei Yin met some Falun Dafa practitioners when she was a college student in Kaohsiung. With recommendations from professors and other students, she became interested in the practice and began cultivating in July 2013. She recalled, “My life changed a lot, like a boat finally returning to harbor.” This reduced her stress and helped her to remain calm on a daily basis.

Through applying the principles of Truthfulness-Compassion-Forbearance, Wei found many opportunities to look inward and improve herself. She said, “I know one older practitioner who speaks with a loud voice and often moves around her in her chair. So I felt that I didn’t like her.” But upon hearing that practitioner talk about her understanding of cultivation practice, Wei saw the practitioner's pure heart. “I now know I shouldn’t judge others based on their appearance or my notions,” she added. 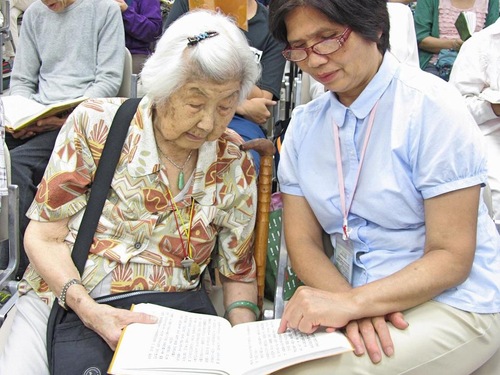 Ms. Feng, 95, grew up in a wealthy family in Shanghai. She had her own car at age 19, and did not have to worry about much in her life. She moved from Hong Kong to Taiwan in 1966, and got married. Although they did not have children, the couple had a happy life through the years. Ms. Feng said, “About 18 months ago, my husband died, leaving me depressed and uneasy.”

One of her caretakers, a Falun Dafa practitioner, told her about the meditation. She began reading the book Zhuan Falun and liked it very much. She said with a smile, “When my nephews came to visit me, they were surprised to see that I read so much. They said they could not even do that. I told them that reading Zhuan Falun makes me feel safe, stable, and happy.”

Mr. Lin, from Yilan, has his own business. Prior to practicing Falun Dafa, he often thought about maximizing business profits by negotiating prices with clients, and sometimes the arguments were intense. He said, “After becoming a Falun Dafa practitioner, I learned about the relationship of loss and gain from Master Li's teachings and was no longer attached to it so much.” In addition, he was able to be considerate of others and tried to help his clients as much he could. “I am more relaxed than before. And somehow my business also runs great and has become more profitable,” he said.

Sending forth righteous thoughts is something every practitioner needs to do, but some practitioners have difficulty concentrating their minds, or doing so consistently. Han Qin from New Taipei City said she also had this problem in the past. “Later I realized it was because I lacked true faith in Master and Falun Dafa,” she explained. One example she gave was a march in Hong Kong on July 23 this year. “The weather forecast predicted a signal No. 8 tropical storm. Since all government agencies cease to operate for storms with signals higher than No. 3, the police ordered us to cancel the event.” All practitioners calmed down and sent forth righteous thoughts, and the weather forecast later changed to a signal No. 3, allowing the march to proceed as planned. Han Qin said that many police officers were amazed, saying that Falun Dafa was so powerful that it drove away the tropical storm. This is just like what Master said in Hong Yin Vol. II,

Don't Easily Give up When Saving People

Ms. Yu from Taoyuan said she had walked a long way before finding Falun Dafa,“I tried many different systems in the past, but none of them was as good as Falun Dafa.” She said she not only gained more understanding about life itself, but also realized the importance of selflessness, letting go of attachments, and saving others with compassion.

Ms. Li agreed. Seeing many Chinese people poisoned by the defamatory propaganda from the Communist Party, she had been calling people in China to tell them facts about Falun Dafa. Two days ago, after she dialed a number, the recipient kept listening without saying a word. “I was upset and was about to hang up. Later, I figured it was not the right thing to do, so I continued talking. In the end, I told him the importance of quitting the Chinese Communist Party, and asked his name. He said yes and gave me his name. I was so happy for him.”

Ms. Li said that as a practitioner, she knows the importance of righteous thoughts and persistence. “Even if the recipient remains silent or throws bad words at us, we should not easily give up,” she said, “Because if we do not save them, their future could be at risk.”

“Two Sisters in Liaoning Province Imprisoned and Tortured for Their Faith”