(Minghui.org) The Art of Zhen Shan Ren (Truthfulness, Compassion, Tolerance) International Exhibition was held at the Hughes Gallery in Unley, Adelaide, the capital of South Australia, from June 30 to July 23, 2017. It was the second time the exhibition has traveled to Unley. Visitors were moved by the sensitive artworks depicting Falun Gong practitioners' unyielding spirit in face of the Chinese Communist Party's (CCP) persecution. Unley Mayor Lachlan Clyne visited the exhibition for the second time and praised its beauty as “beyond this world.”

Since its opening exhibition in 2004 in the Rayburn House Office Building, a congressional office building for the U.S. House of Representatives, the Art of Zhen Shan Ren International Exhibition has traveled to more than 200 cities in over 40 countries. According to Ms. Zhang, organizer of the exhibition in Unley, using realistic technique, these artworks present the spirit of Truthfulness, Compassion and Tolerance of Falun Gong practitioners, who put these principles into practice while facing the CCP's brutal persecution.

“I feel the power of unwavering morality!” Lynette wrote. 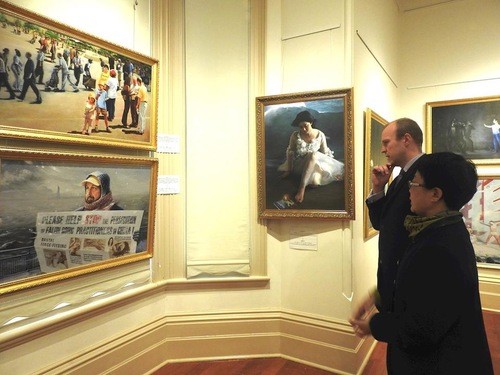 Unley Mayor Lachlan Clyne said he was very touched and his view was broadened by the beauty of the artworks. The appalling persecution exposed by the artworks, especially the torture faced by practitioners, the imprisonment and forced organ harvesting, all triggered his desire to bring an end to these atrocities. He was fascinated by the spiritual meaning of some of the paintings. He commented that the beauty of the heavens had been realistically portrayed and touched his heart.

Mayor Clyne said he hoped that the local residents would get a chance to appreciate these artworks. He felt that it would bring special significance to the younger generations. Mr. Clyne loves Chinese culture and has read Journey to the West, a classic Chinese novel. He said this art exhibition was meaningful to people of all ages.

Mathew, who has been working in the field of art and cultural exchange for 11 years, said he thought that the art exhibition was not only of superb quality, but also sent an important message. He said it was important for artworks to expose the truth and carry rich spiritual meaning. Mathew noted that the exhibition also was a reminder to provide opportunities for artists to express their view of the world, the universe, and life. 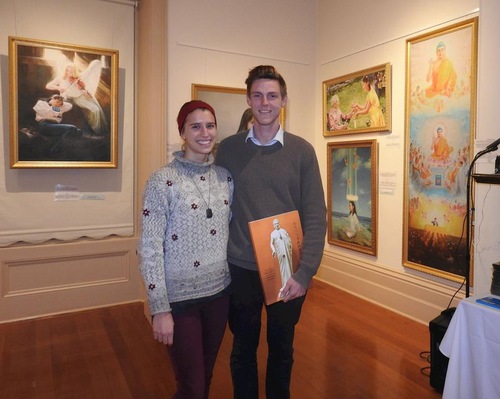 James and Jessica were moved by the artworks.

James and Jessica visited the exhibition on opening night. They said that they felt a warm energy as they studied each painting. James was moved while looking through the artwork collection album and bought a copy for himself. Jessica said the CCP's organ harvesting was so cruel. She wants to help spread the word so that more people will pay attention to what is taking place in China. 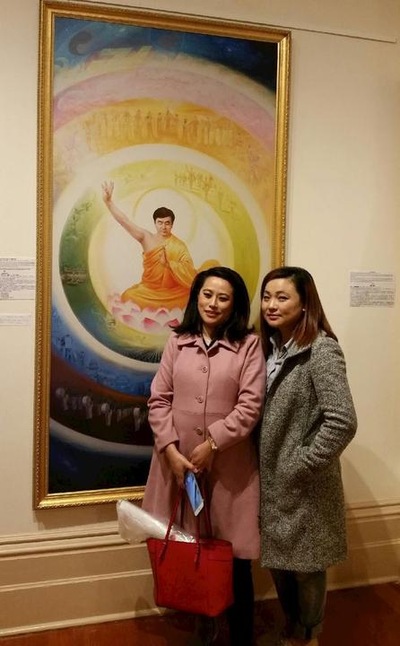 Shannie and her friend at the exhibition.

Shannie said she could feel a compassionate and warm energy from the painting titled Buddha Statue. “The energy is so strong that I could feel it from the other side of the gallery.” She studied every painting carefully, and was saddened by the brutal persecution as exposed by An Orphan's Sorrow.

Both Shannie and her friend became interested in the Falun Gong exercises. They left their contact information and hope to learn the exercises at a local group exercise site.

A group of young men from Nepal were shocked by the facts of the persecution. They solemnly signed the petition against forced organ harvesting and asked many questions about Falun Gong cultivation practice. They repeatedly thanked the practitioners and expressed their admiration for Falun Gong practitioners' courage in the face of persecution.