(Minghui.org) Activities to introduce Falun Gong (also called Falun Dafa) were held in the Newmarket district of Auckland, New Zealand on August 12. Local practitioners demonstrated the Falun Gong exercises and narrated an introduction in both Chinese and English. Many people got a chance to learn about Falun Gong and express their support. 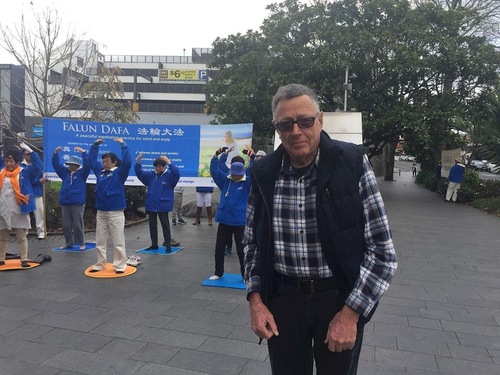 Mr. Dudley Greenway is one of many who support Falun Gong after learning about the persecution in China.

Mr. Dudley Greenway served in the Navy and visited China in 1962. He said China was beautiful at that time. He has heard about Falun Gong and admires practitioners' great courage. He signed a petition calling for an end to the persecution of Falun Gong in China, and commented, “It's your right to practice Falun Gong. The persecution shouldn't have happened.”

A lady said she had worked in Hong Kong for 25 years and seen how practitioners in Hong Kong persistently oppose the persecution. She had also seen documentaries on organ harvesting atrocities where living Falun Gong practitioners are killed for their organs. She is completely convinced that such atrocities indeed happen in mainland China. She said someone must put a stop to it.

Many Chinese people took the opportunity to quit the Party and its affiliates. After learning the facts about the persecution, they chose to stand on the side of goodness.

“Releasing Attachments That Have Held Me Back in Cultivation”