(Minghui.org) Europe in summer attracts tourists from all over the world. Falun Gong practitioners have held a series of activities to tell the public about the Chinese self-improvement practice and its persecution in China.

On August 5, practitioners set up a booth at Bellevueplatz Square in Zurich, demonstrating the exercises and raising public awareness of China’s state-sanctioned killing of practitioners for their organs. 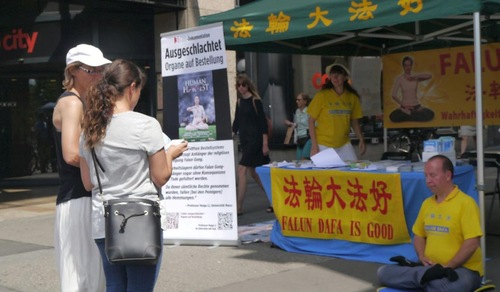 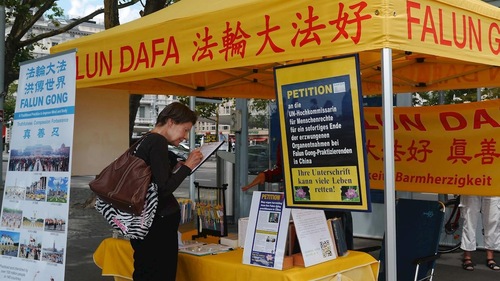 Signing a petition against the persecution of Falun Gong in China

Many people signed a petition condemning the persecution of Falun Gong in China. Some of them believe that the more people know about the persecution, the sooner it would stop. Some took materials in multiple languages for their friends and families.

Gigi, a local college student, was attracted to the gentle Falun Gong exercises. She talked to practitioners to find out more about Falun Gong and was saddened by what she heard.

“When I heard they [practitioners in China] cannot live in peace and cannot have their own opinions or freedom of belief, it pains my heart. I’m moved by their suffering, and it cannot be tolerated,” Gigi said.

Discussing forced organ harvesting, she said, “This is a crime. I cannot understand how people can treat other human beings like that. I am shocked. I hope my signature can help stop all of this and let more people know. In a peaceful way, it can unite society and let people know: we’ve heard the news, and we know about the situation. We want to be able to do something to stop all of this.”

The Zhen-Shan-Ren (Truthfulness-Compassion-Tolerance) Art Exhibition was on display at the well-known Galleri Cupido in Stockholm from July 18 to August 5. Tourists from 54 countries, including mainland China, viewed the paintings by artists who practice Falun Gong. 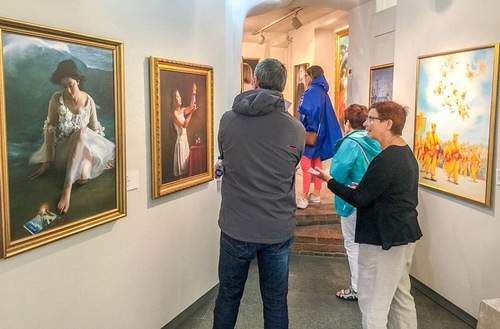 Many Chinese visitors learned about Falun Gong and the persecution–information that is heavily censored in their home country. They were impressed by the freedom that people enjoy in Sweden. A man from Beijing said to practitioners, “In China, people can only hear one voice, and that is from the government. We have no other choice. I am fortunate today to see all this. Falun Dafa is good.”

Two young Chinese students looked at each painting carefully. They knew a little about the persecution before they came to Sweden but learned more from the exhibition. They thanked the practitioners for their effort and promised to tell more Chinese people about what they learned.

Many visitors praised the paintings and commented that the artworks awaken people’s conscience and tell people about the Chinese Communist Party's dictatorship.

Practitioners held a day-long event on August 5 in Strömstad, a city located between Gothenburg and Oslo. 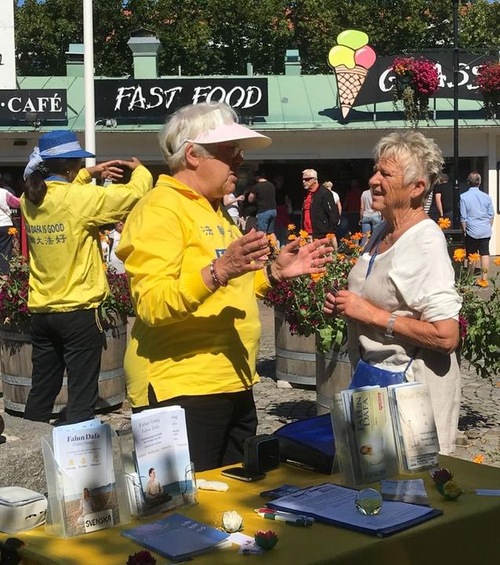 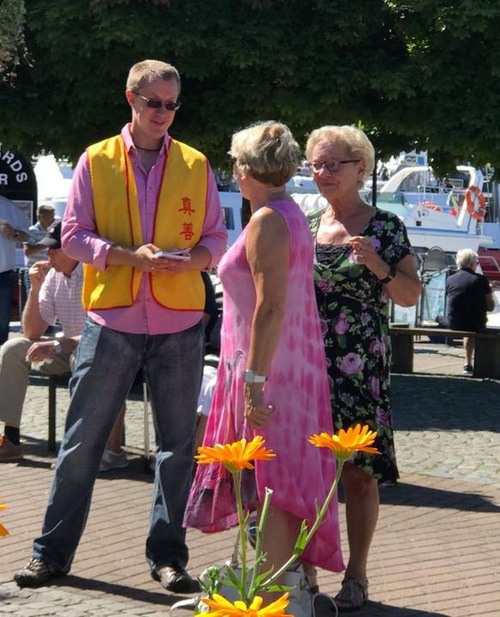 Many locals were interested in learning the exercises. An elderly woman wondered if joining the group exercises would help her to sit in the full-lotus position for meditation. She wanted practitioners to set up a local exercise site.

Another gentleman was interested in Falun Gong’s principles of “Truthfulness-Compassion-Forbearance” and said, “It is not easy to really follow these principles.”

A similar event was held in Helsinki last weekend. Tourists and local residents learned the exercises at the practitioners' booth and signed the petition to condemn the persecution in China. 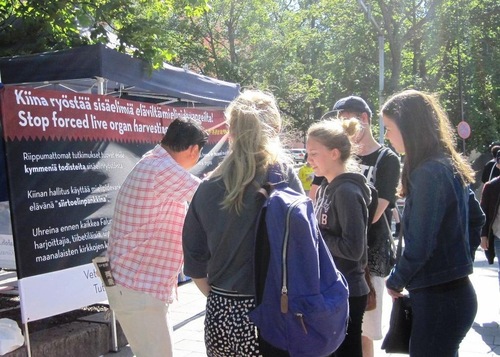 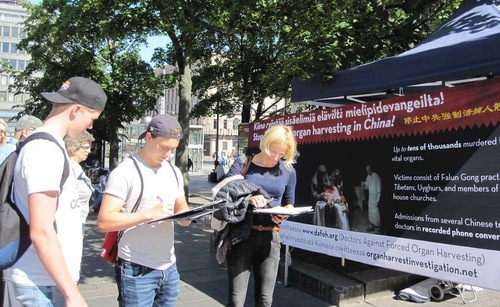 Signing the petition to support practitioners’ efforts to end the persecution

Practitioners introduced Falun Gong and its guiding principles to the attendees of the largest book fair in the Netherlands on Sunday. One hundred and thirty thousand people from all over the country came to the book fair in Deventer. 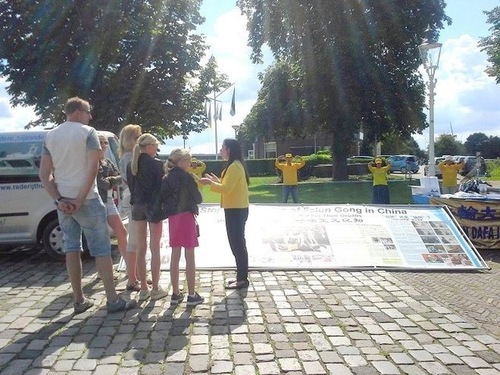 Falun Gong booth at the entrance of the book fair 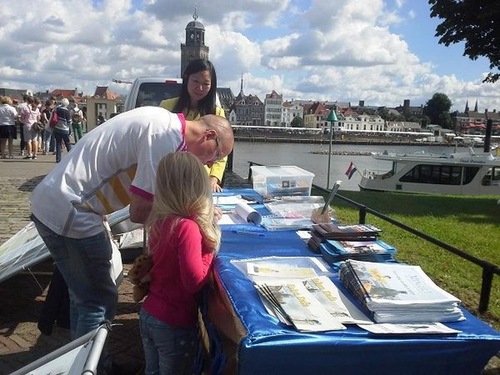 Signing the petition to condemn the persecution

Turkish practitioners held a candlelight vigil on the shore opposite the road leading to the Chinese embassy in Istanbul on July 20, protesting the 18-year persecution and commemorating those who have lost their lives under the Chinese Communist Party’s campaign to eradicate Falun Gong. 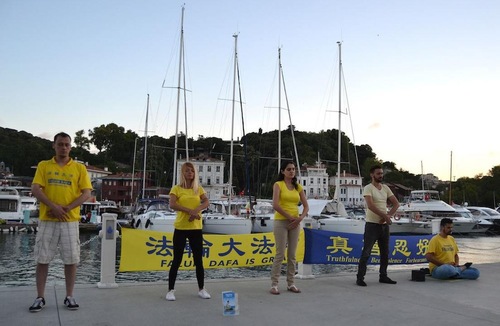 Demonstrating the exercises before the candlelight vigil 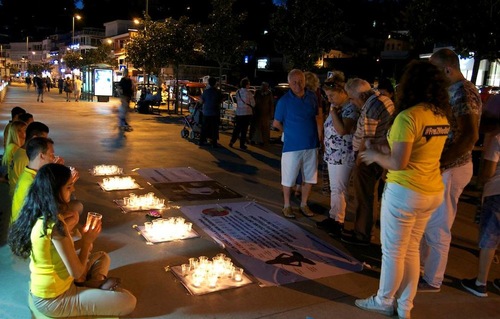 Many locals stopped to learn more about about the persecution of Falun Gong.